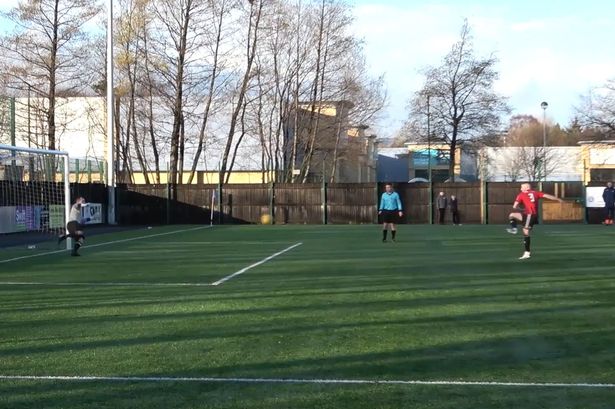 St Peter’s managed to battle their way to three points despite being below par against 10-man Harthill.

The Paisley club knew a victory at New Western Park at the weekend would take them above Harmony Row and into third place in Division 4.

The hosts started the game poorly though, with Harthill inches away from opening the scoring when a header from a set-piece crashed back off the post.

The Glenburn-based side managed to make the breakthrough deep into the second half when Jamie Menzies was scythed down just inside the box.

Calum Bateman stepped up to send the keeper the wrong way from the spot to finally open the scoring.

Logan Dempsey made sure of the victory with almost the last kick of the ball, firing home from the edge of the box after a well-worked move down the right flank.

St Peter’s boss Paul McTaggart was pleased his side were able to squeeze out a win while not at their best.

But he is adamant they’ll have to play much better to stay above Harmony Row in the table, who they face in two of their final five league fixtures this campaign.

McTaggart told Express Sport: ”It’s a great result against a team we knew would be stubborn and would make it difficult for us to play our style.

“They’re in a bit of a false position in the league because they’re a very decent team. They hit the post early on and that jolted us into life, because up until that point we’d been dead flat.

“They had a man sit off before half-time for taking out our striker when he was through on goal.

“I’ve seen them given either way but the referee was sure it was a goalscoring opportunity.

“Even when they were down to ten, they were still tough to break down and it wasn’t until about 70 minutes we finally got the opener. The second was a lovely bit of football, working our way along the box before setting up the late runner. That was the real positive to take from the game.

“We were well below our standards but still managed to grind out the win, so there are positives to take from that at least.

“We’re back into third, two points clear of Harmony Row and we’ll definitely have to play much better in our remaining five games to stay ahead of them.

“Third is the target now as the two teams at the top have run away with the title race now.”

St Peter’s have a free weekend coming up but won’t be sitting on their hands.

Instead they’ve lined up a very difficult friendly against Renfrewshire rivals Neilston, who are currently battling for the Conference C title.

McTaggart insists he wants to constantly challenge his players, including a number of young prospects who will be given a chance to impress against the Farmer’s Boys at the Brig O’Lea
Stadium.

McTaggart said: “We’ve lined up a tough friendly against Neilston on Saturday and we’re taking a team of eight first team players and eight under-20s.

“They are flying in their division and just beat Renfrew 6-1 in a friendly, so we’re under no illusions as to how tough a game it’s going to be.

“It’s a bit of an audition for the younger boys, but we know what they’re all about and we’re not going to judge them entirely on a game against an opponent like Neilston.

“They are a very good side and it’ll be a tough test, especially for our youngsters, but we’re trying to see if they can compete at this level. I’m confident they will be.

“We’ve got Campbeltown the following weekend and we want to finish the season as strongly as possible.

“Of course we wanted to win the league when we set out, but we’ve done very well considering we’ve put the team together from scratch.

“There are five games to go and 15 points still to play for. We’ll do everything we can to finish the season on a high note.”

Johnny Depp Vs Amber Heard: What we know about Heard’s career, background and family life