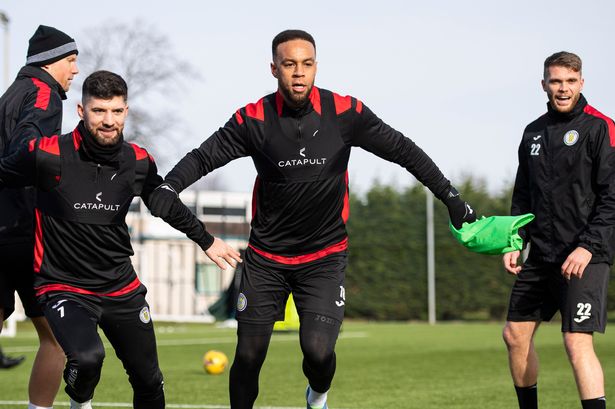 The new St Mirren boss built his steely Motherwell defense around him and Cedric Kipre, now impressing at Championship side West Bromwich Albion.

The talented pair helped steer the Steelmen to the Scottish Cup and League Cup finals in the 2017/18 season, keeping clean sheets against Aberdeen and Rangers in the respective semi-finals of each competition.

Now Robinson finds himself reunited with Dunne in Paisley having taken over the managerial reins on Tuesday morning.

And thanks to a successful appeal against a red card Dunne picked up in last weekend’s 1-1 draw with Livingston, Robinson is now able to call on the 29-year-old once again when he leads the Buddies for the first time this afternoon against Hearts at the SMISA Stadium.

Robinson told Renfrewshire Live Sport: “I would like to take the credit for the appeal but it was absolutely nothing to do with me.

“Vicki (Gilzean) put it all together. But I don’t think it was too hard a decision.

“It’s nice that people actually admit when they make a mistake, which (referee) Willie (Collum) obviously did, and it was downgraded to a yellow card.

“Which is great because Charles has been a big, big part of the success so far.

“To lose him for two games over that would have been a joke so I’m glad we got that sorted.

“Both on and off the pitch, Charles is such a character. He really runs the dressing room and keeps everybody motivated.

See also  17 countries you can visit even if you're unvaccinated

“His pace is electric so it allows you to press teams higher up the pitch knowing he has that recovery pace.”

Robinson has already had to cope without Dunne for over a year during his final 16 months in charge at Fir Park.

The powerful defender missed the vast majority of the previous two seasons after suffering bone-bruising during a collision with an advertising hoarding, only just returning to full fitness in Paisley having been recruited by former boss Jim Goodwin last summer.

Robinson, who signed Dunne for both Motherwell and another former club Oldham, is over the moon to see him fighting fit and proving his worth on the pitch once again.

Robinson said: “It was a big loss to Motherwell when he wasn’t fit.

“It’s just great to see him as a boy and a player playing back, fit and enjoying life again.

“The last time I saw him we were just extending his contract on a basic number, just to try and keep him in work.

“I don’t think people realize how hard it is when you are injured and how mentally strong you need to be.

“Charles has shown that in abundance.”

Robinson has been in the job less than a week but already recognizes the team spirit and determination coursing through his new squad’s veins.

He revealed he doesn’t feel he has to make too many changes to a side that remain unbeaten in 2022, having won six of their last eight matches.

Instead he’s focusing on keeping the Buddies on the right track, particularly when the mental pressure begins to build as they head into the business end of the campaign.

Robinson added: “Everything is going in the right direction here and it’s a case of keeping that drive and energy in the football club.

“I’ve come in and seen straight away that the boys are confident. There’s a real camaraderie about the place.

“The older players run the dressing room and that’s great. It’s just about me moving it along and in time putting my own stamp and style on it.

“But for now, nothing too much needs tweaked.

“We are getting to the business end of the season and with that comes pressure and expectation. That’s the bit I have to help the boys manage.

“I’m very fortunate that about 50 percent of the players here I’ve worked with or managed before. And a lot of the other boys I’ve played against on a regular basis.

“Jim Goodwin is someone I kept in touch with when I was down south, so it hasn’t been a very big transition.

“There’s no need to change something that isn’t broken. There are certain individual things I’ll put my stamp on – how we press, I’ll tweak slightly but there’s not a huge difference to it.

“We just have to keep the momentum going. If anything does need fixed, I’m experienced enough to do that but it’s more about managing the players through this last spell of the season.”