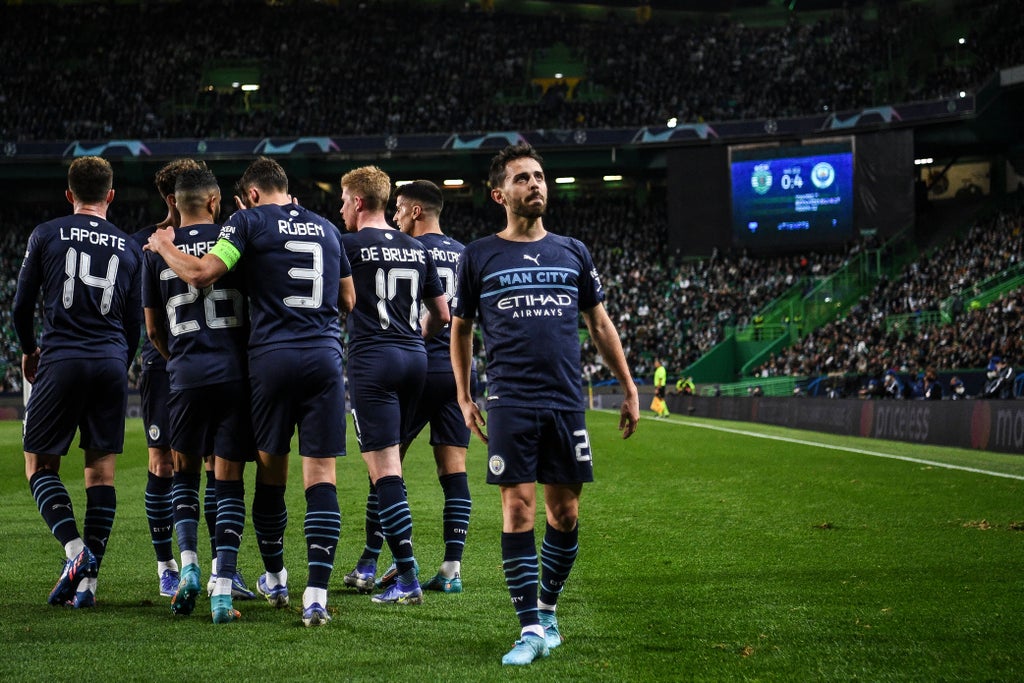 There already appears to be an issue with Uefa’s decision to scrap the away goals rule. Nobody told Manchester City.

If this had been any other European tie played over the last 57 years, Pep Guardiola’s side would be home and hosed. Instead, Sporting Clube de Portugal could force extra time and penalties with a 5-0 win at the Etihad three weeks from now. Something about this display of brute attacking brilliance and absolute superiority at the Estadio Jose Alvalade tells you City will be alright.

A place in the Champions League quarter-finals is all but assured after five unanswered goals over Portugal’s reigning champions, with two from local boy Bernardo Silva. The crowd at the Alvalade had started the evening by loudly whistling whenever he, Ruben Dias, Joao Cancelo or Ederson – all Benfica players at one point in their career – touched the ball but City beat that hostility out of them.

It was on this ground, during the Champions League ‘mini-tournament’ in Lisbon two summers ago, that City’s journey came to a sudden and surprise end against Olympique Lyonnais. They were expected to go all the way then, just as they are now, and Guardiola has learned that being favorites counts for little in this competition. It counts for something, though, and City looks more than deserving of that status.

Guardiola’s side barely took any time at all in letting the gulf in quality tell, with the ball in Sporting’s net after only seven minutes, though were made to wait a little longer to actually take the lead. A lengthy VAR check followed Riyad Mahrez’s rolled finish into a half-unguarded net, as Kevin De Bruyne had appeared to assist him from an offside position after Phil Foden’s shot was saved by Antonio Adan.

With the flag raised, both sets of players lined up in formation for a goal kick and stood there for nearly a full two minutes, waiting for the check to be completed. Some had to jog up and down on the spot to keep warm. Finally, the goal was given and City’s players abandoned their stations to mob Mahrez. De Bruyne had been played onside by centre-half Goncalo Inacio.

Sporting had glimpses of City’s goalmouth before this game was taken away from them but they were just that, glimpses. Their game plan under their promising young coach Ruben Amorim – to defend deep and break at speed – was either spoiled by loose pass or expertly shut down. And at the other end, City were regularly finding gaps in Portuguese football’s meanest defence.

The second, though, came from a set piece. It was Bernardo’s first of the night and it was spectacular, driven hard and on the half-volley after Mahrez’s deep corner was headed high up into the air by Rodri. Bernardo caught the bouncing ball perfectly, and as if the mechanics of the strike were not already aesthetically pleasing, it deflected in off the underside of the crossbar too.

Foden added a third, tapping Mahrez’s low cross in at close range after the former Liverpool defender Sebastian Coates missed a challenge. When Bernardo scored the fourth a minute before the break, converting Raheem Sterling’s pull-back from the byline, it was the first time that either side has led an away game by four goals or more at half time in the Champions League knockout stages.

It can sometimes feel like City collect these minor milestones like fridge magnets, picking at least one up on every trip they make and match they play, but the sum total of them speaks how they dominate virtually every opponent they face, and the consistency with which the reach such milestones should by no means diminish the achievement.

Sporting would only lose the second half 1-0. Bernardo believed he had silenced the Alvalade once and for all with his first Champions League hat-trick when play resumed, with a glancing header on De Bruyne’s chip to the far post, but another VAR check ruled out his third of him. It was mercifully shorter this time, at least.

It was instead left to Sterling to put this two-legged tie beyond any reasonable doubt after just 58 minutes of play. All the talk of Sporting’s defensive solidity was made to look silly by the space he was offered to step inside, shift the ball onto his right and fire for the top right-hand corner from around 25 yards out. The goal was Sterling’s 127th for City, enough to move him into the top ten of the club’s scoring ranks.

Guardiola could have gone in for the kill. He has in the past. City eleven pummeled third-tier Burton Albion 9-0 in the first leg of a Carabao Cup semi-final. Guardiola believed that to keep on scoring was the most respectful thing his players could do but there was a touch more mercy this time, as the intensity and regularity of their attacks dwindled. After all, why kill off a tie that, to all intents and purposes, is already dead?