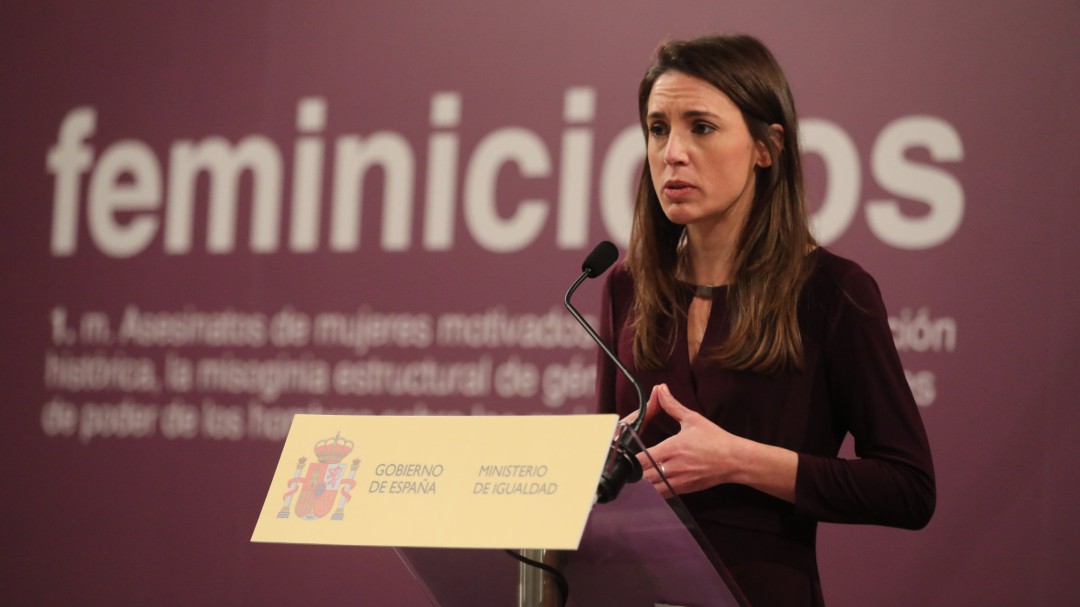 In 2022, Spain will become the first European country to officially count the different types of femicides and not only those that occur in the sphere of the partner or ex-partner, but also honor crimes or the murder of the relatives of the victims of gender violence. In this way, there will be a State Feminicide Observatory, as explained at a press conference by the Minister of Equality, Irene Montero, in which together with the Secretary of State, Ángela Rodríguez, and the Government Delegate for Gender Violence, Victoria Rosell, have taken stock of the measures taken this year to stop sexist violence and have explained others for 2022.

Among them, the one that the Ministry already announced a few weeks ago: counting the murdered not only exclusively those that occur in the sphere of the partner or ex-partner, as stated in the comprehensive law against gender violence, but for all types of violence against women. This new count responds to compliance with the Istanbul Convention but also that of the State Pact against Gender Violence itself. “We will be the first country in Europe to count them officially,” said Montero, who said that the objective is to detect the extent of the most extreme violence against women and “deploy the best resources.”

From next year, the following will be collected: femicides in the partner or ex-partner, family, sexual, social and vicars.

– Femicide in the partner or ex-partner: The murder of a woman in the terms provided in the law against gender violence.

– Family femicide: Murder of a woman by men from her family environment and this category in turn will differentiate between general femicide -that of a woman by a man with a kinship by consanguinity or affinity- and the crime of honor -the crime of a woman at the hands of a man in her family, for the belief that it has caused her to be discredited.

– Sexual femicide: That of a woman without a partner or family relationship linked to the sexual violence included in the Organic law project for the comprehensive guarantee of sexual freedom -the one known as the only yes is yes law-. This means that it will be subdivided into feminicides for sexual assault – when the aggressor has no intimate or family relationship; those linked to trafficking for the purposes of sexual exploitation, sexual exploitation, prostitution or other activities with sexual connotations stigmatized by gender; the one linked to female genital mutilation, and also to forced marriage.

– Social feminicide: The murder of a woman by an assault, of a non-sexual nature, at the hands of a man with whom she had no intimate or family relationship, such as a stranger or a co-worker.

In the case of other murdered women and minors, the daughters of 18 years or more in charge of a man will be counted in the field of relationships of a partner or ex-partner or other women of legal age, such as friends or sisters, among others, as well as close minors such as nephews. And vicarious femicide outside the scope of the sentimental relationship will be that of a woman or minor by a man with whom there is no relationship with a partner or ex-partner, “with the purpose of causing harm or damage to a woman in the scope of the other categories of femicides “.

Minor sons and daughters murdered outside of the femicide of the partner or ex-partner and other women and minors, who are the daughters of 18 years or more by a man outside the scope of the couple, are included; and other women of legal age (friends and sisters, among others), close minors.

Sources from the department headed by Irene Montero, have explained that this “milestone” of counting femicides is the result of a process that participated in and consulted with organizations such as the State Observatory on Violence against Women, the Social Forum against Trafficking, the coordination units violence against women and also with the European Institute for Gender Equality (EIGE).

The same sources have indicated that before including the data in the statistics there will be an internal technical process in the Government Delegation for Gender Violence and that it will take “a few months of filming” to have a similar confirmation procedure to the one that exists today in day with the mortal victims in the scope of the couple and ex-partner.