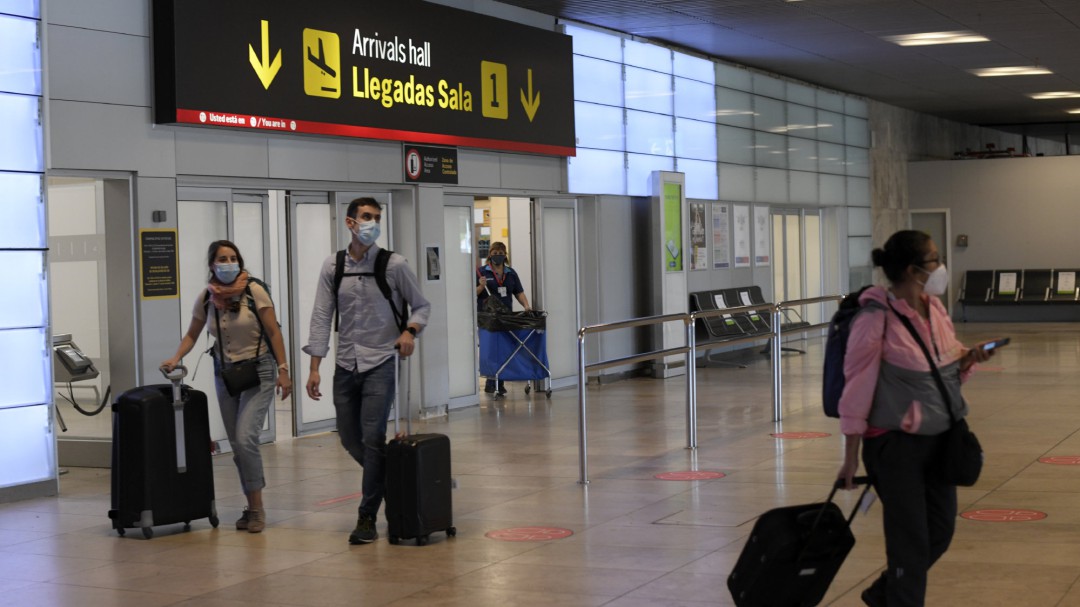 Spain, without any case detected for now of the Omicrón variant, has tightened the controls at the entrances for travelers from several African countries, who must present a negative test even when vaccinated, and those from the United Kingdom, who will only be able to enter with the vaccination certificate. This Saturday, the BOE has published two general provisions, one of the Ministry of Health and the other of the Interior, which limits the requirements to be able to enter people from the United Kingdom, Northern Ireland, Namibia, Botswana, Eswatini / Swaziland, Lesotho, Mozambique, South Africa and Zimbabwe.

On the one hand, those coming from high-risk countries must provide a Sars-CoV-2 diagnostic test with a negative result as of this Saturday, carried out no later than 72 hours before arrival, regardless of whether or not they are vaccinated or have passed the disease. This is stated in the general provision of the order of the General Directorate of Public Health that Health justifies in the new omicron variant detected in South Africa, which “presents numerous mutations related to a possible increase in transmissibility and a decrease in the neutralization capacity by the antibodies “.

“This new situation,” he argues, “highlights the need for an agile mechanism that allows the adoption of additional health control measures for people from high-risk countries due to a significant worsening of their epidemiological situation or in which they are have detected variants of particular concern “.

The list of at-risk and high-risk countries is updated weekly; The current one, which will be in force until 24:00 on Sunday, November 28, considers Namibia, Botswana, Swaziland, Lesotho, Mozambique, South Africa and Zimbabwe as high risk. Those who are at risk are required to have a vaccination certificate, a diagnostic test with a negative result, or confirmation that they have overcome the disease; In this situation there are 27 European countries in full and several areas of Italy and Finland. Meanwhile, those who are not included in these lists and who are not third countries, will not require a document with any sanitary requirement.

Citizens of third countries are subject to a temporary restriction of non-essential travel throughout the EU, which in Spain is regulated by an order from the Ministry of the Interior that this Saturday also published an update. According to her, as of Wednesday, December 1, Spain will only allow the entry of people from the United Kingdom and Northern Ireland with a vaccination certificate and not with negative diagnostic tests for COVID or having overcome the disease as admitted until now .

From that date, therefore, entry may be denied to travelers from these countries who are not provided “with a vaccination certificate that the Ministry of Health recognizes for this purpose, after verification by the health authorities, as well as the accompanying minors to whom the Ministry of Health extends the effects “. The resolution removes Namibia from the list of third countries exempt from the temporary travel restriction to the EU “in view of the fact that it is among the countries with respect to which the Member States consider it appropriate to increase precautions”.

“The appearance of new variants of the causative agent of the disease forces at this time to increase travel restrictions”, argues the department directed by Fernando Grande-Marlaska in the general provision that “will take effect” until 24:00 on the 31st. from December. These measures will be added this Tuesday, when approved by the Council of Ministers, the restriction of flights from South Africa and Bostwana as other countries have done, although the Minister of Health, Carolina Darias, pointed out that the list could be expanded.

WHO warns of its “potential risk”

The new variant was first detected in South Africa, and cases have been confirmed in Hong Kong (China), Israel, Belgium, and the Netherlands and Germany are under investigation. The Advisory Group of Experts on the Evolution of Viruses of the World Health Organization (WHO), in an emergency meeting held this Friday, determined that some of the more than 30 mutations that have already been detected of the Omicron seem to suggest a even higher transmission capacity than previous variants.

They have not yet been able to determine if it is more resistant to anti-COVID-19 vaccines, although the laboratories of the pharmaceutical companies that develop the different antidotes are already working on verifying the effectiveness of their drugs against omicron. This Saturday, the WHO recalled that South Africa, where the vaccination rate barely reaches 25%, “shows that we have to accelerate equality in vaccines as soon as possible and protect the most vulnerable everywhere,” said the director. general of the organism, Tedros Adhanom Ghebreyesus.

Europe and America shield themselves against the new variant

Australia, Brazil, Mexico, Dominican Republic, Guatemala join the countries of the European Union (United Kingdom, Germany, Italy, Austria, the Czech Republic and Turkey) They banned flights to or from South Africa and six other African countries on Friday as a measure against the new variant of the coronavirus (known as ‘Nu’), in order to prevent it from spreading. The restrictions specifically affect South Africa, Botswana, Eswatini, Lesotho, Namibia, Mozambique and Zimbabwe and will apply “for fourteen days”

The first case of this variant in Europe was detected in Belgium: This is a young, unvaccinated woman who comes from Egypt via Turkey. His symptoms have developed 11 days after the trip. Likewise, Germany has confirmed that a man from South Africa is infected and everything indicates that it is the new variant. The British health authorities have also detected two cases of people carrying the Omicrón variant, who are now quarantining, as reported this Saturday by the Minister of Health, Sajid Javid. In addition, two planes from the African country have quarantined 61 passengers testing positive upon arrival in Amsterdam, before the ban was applied. It is being investigated if they are infected with Omicron.

US closes airspace with affected countries

The United States Government warned this Friday that starting next Monday it will place restrictions on travelers from South Africa and seven other countries in the South of the African continent before the appearance of the variant of the coronavirus baptized as ‘omicrón’. In a statement, the White House announced that the restrictions will include, in addition to South Africa, Mozambique, Namibia, Zimbabwe, Botswana, Lesotho, Malawi and Eswatini. The government has only referred to “restrictions on air traffic”, and has not yet provided further details about what exactly the implications are.