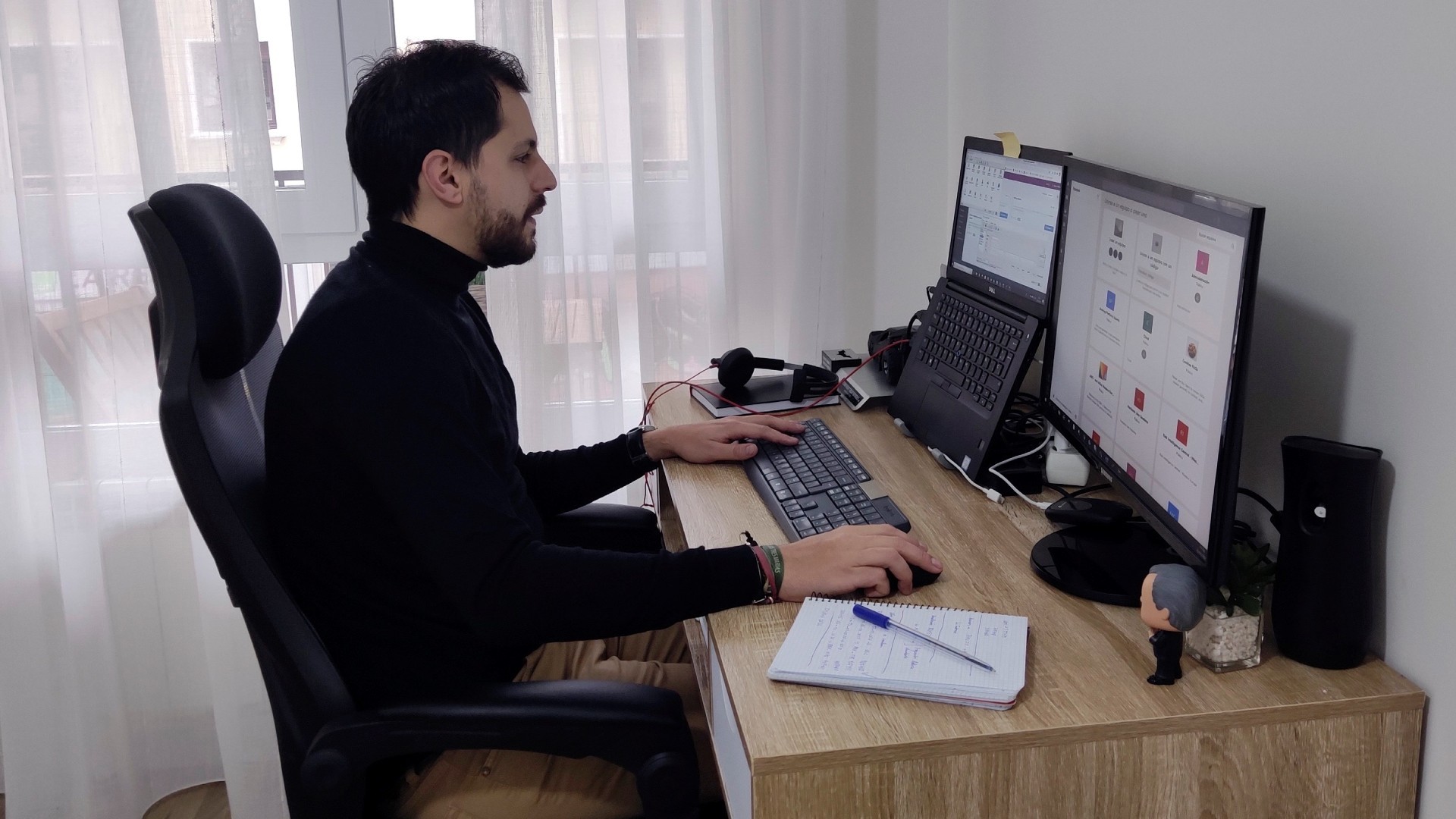 Like the coronavirus, telecommuting has come and gone in waves since the pandemic began. In March 2020, millions of people were forced to work from home overnight, before switching to a mixed model that summer. A year later, throughout this fall, the gradual return to presence began, a return that has been suddenly interrupted in recent weeks by another explosive increase in infections due to the expansion of the omicron variant.

Large companies such as Telefónica, Banco Santander, Mapfre or Endesa have recovered teleworking. Others, including some public bodies, have reverted to mixed models that allow working from home most of the time. If the first massive experience of the telematic day was “chaotic” and “improvised”, according to various testimonies collected by RTVE.es, in the current situation the companies have already “learned something” from these months and have made the change better.

Many employees, having enjoyed teleworking for the first time, are now grateful to return to it. “My work has always been possible to do from home, I had been asking for it for years, although without doing it 100%, because contact with colleagues is lost, “explains Félix, a computer scientist at a large company that in the last week has allowed online work again.

In many cases it has been the companies that have implemented teleworking again, and in others this option was always on the table and the workers have been welcomed en masse to avoid contacts in the middle of the sixth wave. On the part of the Government and the majority of communities, no order has arrived, nor any recommendation to promote telematic work, as claimed by some experts. In fact, the latest ‘Covid traffic light’ eliminates the recommendation to promote teleworking that was in force since last March.

“They did not allow teleworking and many left”

In some work environments the return home has not arrived without conflict, as in the case of a major media outlet in Madrid, where an outbreak had left more than a dozen positives. The company maintained the current model until now and required a minimum of two face-to-face days a week, before which several workers sent a complaint to the management to ask to return to face-to-face work, according to an employee who prefers to remain anonymous.

Given the “lack of response” from the management of the medium, According to the complaint, a middle manager decided herself to allow taking turns and to reduce the number of people in the newsroom as much as possible. After that decision, the “office was left empty”.

At the Sofia law firm, before September they had a “partial” model in which workers took turns at home and at the office. When that month he returned to full presence “There were certain problems and constant complaints from the staff”, to the point that many left the company, he explains. Alarmed, the company directors backed off and allowed teleworking again, although in an “exceptional” way and while the serious epidemiological situation lasts.

For her, personally, the decision caused “a certain detachment, lack of motivation due to the lack of conciliation”, in addition to the inconvenience of daily displacement. “The ideal system is that hybrid that encourages the worker to perform and perform their functions how, when and where they want, “he says, although he believes that flexibility about teleworking may also lead some workers to go to” convey an image of a better employee to their bosses. “

There has also been controversy at the Cervantes Institute. There, face-to-face activities were restricted to the maximum, such as cultural visits, while from the CGT union They denounce that the annual meeting of directors of the Institute’s centers abroad was physically held, which meant that 70 people from 45 countries They will travel to San Sebastián on December 20. The public body has a “contradictory” policy regarding remote work, staff sources denounce.

In other public centers, such as some departments of the CSIC, telework has returned, as has also happened in regional administrations. At the state level, the Government agreed with the unions a new regulation that will allow civil servants work from home three days a week and give facilities to those who would like to do it from emptied Spain. In October, after maintaining a mixed model, the General State Administration imposed a maximum day of teleworking a week.

The companies where teleworking has come to stay

Finally, even despite these conflicts, teleworking has quickly taken hold among those who can. Although there are no official data, rush hour traffic numbers in Madrid show a 10% decrease at the beginning of this week compared to the same in November. The data of bus users in this city also shows a continued decrease in travelers in recent weeks.

Some companies have not had to switch to teleworking because they already had a flexible model since the start of the pandemic. This is the case of the multinational software company where Jorge works, which has been providing more facilities in recent days. “Now they allow teleworking from other communities. There are people who have asked to go to live in Barcelona or Malaga and they allow it, before it was unthinkable, “he says.

He himself answers the questions in this report from a bus between Madrid, where his company is located, to Murcia, where he is from and where he will telecommute in the coming weeks. As requirements, they ask you to register an “alternative address” and send photos of your job to demonstrate that you comply with the regulations on occupational hazards. In his company, telecommuting is here to stay.

Jorge started working in a pandemic, when his company was 100% in remote work, and although at first “he missed having colleagues”, he now admits being “very happy with the model of having total freedom to go or not.”

His case is that of many young workers who They have not known any other model than that of flexibility when going to the office, and that now they do not want to return to total presence. Demófilo is a journalist and works in the delegation of a national media in Malaga, a delegation “young and born after the pandemic and already after the experience of teleworking during confinement.”

For this reason, from day one they did not have a defined model: all the editors could go both physically and work from home. In recent weeks, the newsroom has been emptied. “It has not been a mandate from above, but organically we have decided to telecommute”, bill. He is in favor of having total freedom to choose: “For the employee it is ideal to have that decision-making power over himself always, as long as he responds, obviously”.

At 25, he believes that there is a “generation gap” in the way of understanding work. “For us, who have had the first work experiences in a pandemic, work is like that, you don’t know where it will be. It connects with the idea of ​​the labor market that we have, more liquid, for the good and for the bad, “he continues.

Sofía also perceives a “marked difference” in her company, not so much because of age, but because she conceives work according to “the old and the new school”. “The profiles of a certain age and hierarchy, which They are not the youngest, they have also been able to enjoy the benefits of teleworking. In the end, we are not the youngest who have families and needs for conciliation, “he says.

Monica works as an administrator in the Spanish headquarters of a Swedish multinational in which they operated with a flexible model. They planned to return to full presence on January 1, but after registering a positive in the office, their manager sent them an email asking them to “return home immediately.” Now they will be governed by a control of the telework days per month, a measure that he welcomes, although he does not understand why if his company is “So modern in everything, why don’t they allow whoever wants to go when they want.”

For the moment, this return to teleworking is temporary, generally until the first weeks of January, but many hope that a partial model will definitely prevail. Companies “have adapted after the first experience with confinement,” says Félix, although “not as fast” as they should.