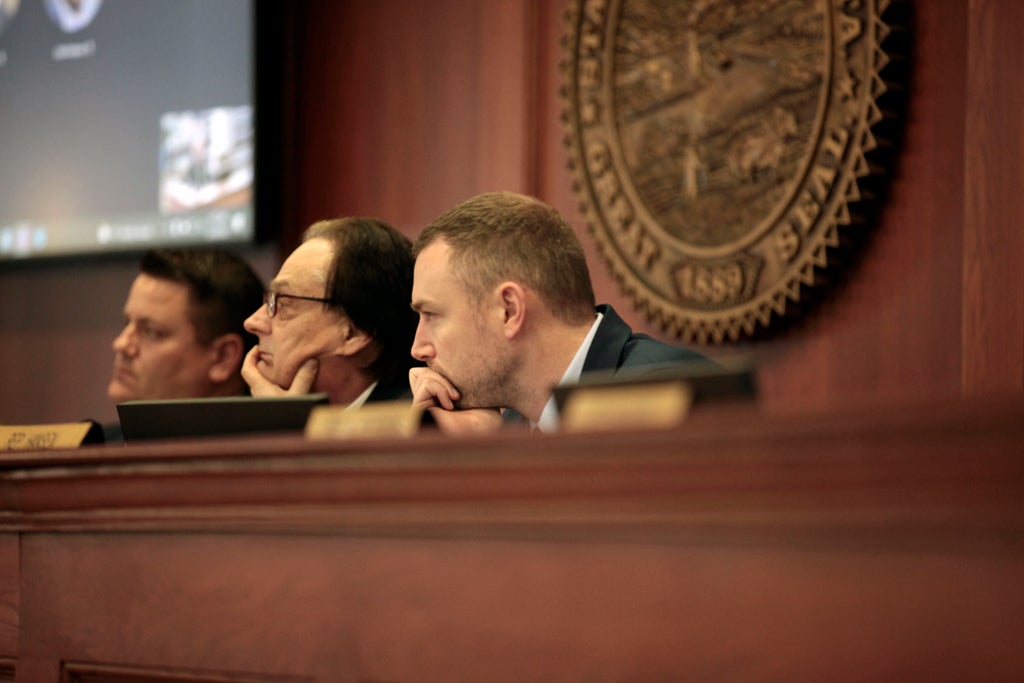 The South Dakota prosecutors who charged the state’s attorney general with misdemeanors in a 2020 fatal car crash defended their charging decision on Thursday to lawmakers weighing whether he should face impeachment charges.

The two prosecutors said neither the fact that criminal investigators doubted Attorney General Jason Ravnsborg’s account of the crash on a rural highway nor the surrounding pressure from Gov. Kristi Noem swayed them to pursue more severe charges.

“I have to do what you can prove,” said Michael Moore, the Beadle County state’s attorney who assisted the prosecution. “I need to have facts to show that you’re guilty of a crime and then I can charge you.”

Ravnsborg, who was elected to his first term in 2018, pleaded no contest in August to a pair of misdemeanors in the September 2020 crash that killed a man walking near a rural highway. The attorney general first reported the crash as a collision with an animal. He has insisted that he did not realize he had killed the man, Joseph Boever, until he returned to the scene the next day and discovered his body.

As a House impeachment investigation committee has sifted through the crash investigation and questioned key figures in the crash probe and prosecution, a divide has become evident on the nine-member committee.

One group of lawmakers has questioned Ravnsborg’s truthfulness and conduct during the crash investigation, while others have pursued a line of questioning about whether Noem was applying undue pressure to the prosecution as she pushed for Ravnsborg to be forced from his office.

“We don’t live in a vacuum. We know what the governor wanted us to do,” Moore said of Noem’s push to bring more severe charges.

Hyde County State’s Deputy Attorney Emily Sovell, who led the prosecution, said she took steps to avoid being influenced, including at one point excluding Noem’s Secretary of Public Safety, Craig Price, from communication about the case. But Sovell said Noem’s administration last year crossed a line in releasing video of Ravnsborg being interviewed by prosecutors while he was still facing charges. She said it made the job of the prosecution harder and could have tainted a jury.

Moore called it “an ethical violation for me as a prosecutor.”

However, the Department of Public Safety had argued that it was part of Noem’s push for a higher level of transparency as the state’s top law enforcement officer was under a criminal investigation.

Price defended the investigation on Twitter after the committee hearing, describing it as “first class.”

“I’m proud of the officers who dedicated so much time to seeking the truth,” he said.

Meanwhile, other lawmakers raised questions about Ravnsborg’s conduct following the crash as the committee questioned two of his top aides.

Tim Bormann, the attorney general’s chief of staff, testified that when he spoke with Ravnsborg as he completed his trip in a borrowed car following the crash, he sounded “happy to be on the road getting home.”

“I hit something in the road,” Ravnsborg had texted his top aides.

When the two men returned to the scene the next day and Ravnsborg discovered Boever’s body, Bormann said the attorney general was “very shook.”

David Natvig, the director of the Division of Criminal Investigation who was present for part of the conversation, described the interaction as “a pretty innocuous conversation between individuals who knew each other.”

However, the supervisory agent, Brent Gromer, documented what their conversation covered in a statement, which drew some lawmakers to raise questions about the conversation.

Natvig chalked the statement up the thorough work of a seasoned law enforcement officer.

The impeachment investigation committee gave no indication on the next direction of its probe, but scheduled its next meeting for March 10, the final day that lawmakers will be in Pierre for the legislative session.