For US managers of some large-growth stock funds, big gains in Apple (AAPL) and Microsoft (MSFT) have become too much of a good thing.

These two stocks, along with other giant technology names, have now become such large weightings in the key market indices against which actively managed funds benchmark holdings and performance that they’re running up against certain limits set by the Securities and Exchange Commission (SEC) .

As a result, some fund managers are finding themselves in the position of essentially betting against continued outperformance of these big tech stocks by having to hold smaller positions in the stocks than the market indices would otherwise suggest.

This isn’t an entirely new problem. For years, large-growth managers have grappled with how to manage their funds against an ever-consolidating Russell 1000 Growth Index that, even after retreating in early 2022, remains historically concentrated.

Using the iShares Russell 1000 Growth ETF (IWF) as a proxy for the large-cap growth index, at the start of 2014, 21% of the benchmark sat in its top 10 holdings. While some familiar stocks, like Apple, Microsoft, and Alphabet (GOOGL), were among the 10 largest index holdings at that time, the top 10 also included traditional defensive stocks like Philip Morris International (PM) and Coca-Cola (KO).

Since then, technology stocks have pushed the index to new heights, as Google (whose parent company is Alphabet), Apple, Meta Platforms (formerly Facebook (FB)), Microsoft, and Amazon.com (AMZN) – the “GAMMA” stocks – collectively contributed nearly half of the index’s more than 250% gain.

The rise of the GAMMAs has created a top-heavy index; the top 10 companies are now almost exclusively tech companies and accounted for just under 50% of the Russell 1000 Growth as of January 2022. 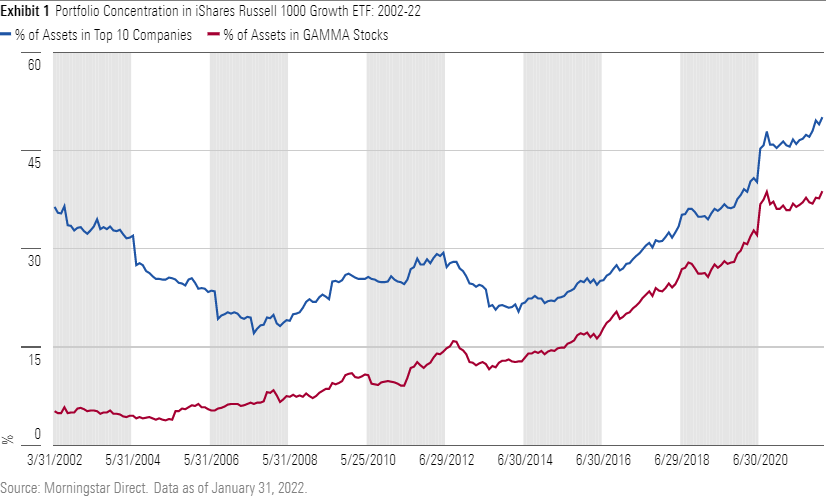 This level of concentration is historically unique, but it is not without fundamental justification. The top 10 companies in the index contributed over 35% of the index’s earnings before interest, taxes, depreciation, and amortization over the trailing 12 months through January 2022 – a 20-year high.

Big tech was a clear beneficiary of the pandemic-inspired work- and shop-from-home trend. Amazon, Microsoft, Apple, and Alphabet each profited massively from the spike in demand for e-commerce, digital advertising, and cloud computing services.

In fact, between December 2019 and January 2022, the Russell 1000 Growth – excluding financials, which earn significant interest revenue – added roughly $207 billion in aggregate EBITDA, of which the GAMMAs contributed $196 billion, nearly 95%. Without the GAMMA stocks, the aggregate index barely grew cash earnings at all. Investing, however, is a forward-looking endeavour, and some growth investors are concerned that mega-cap tech companies’ big revenue and earnings spikes merely pulled forward future demand, and that their long-term prospects are not as rosy as recent results would indicate. 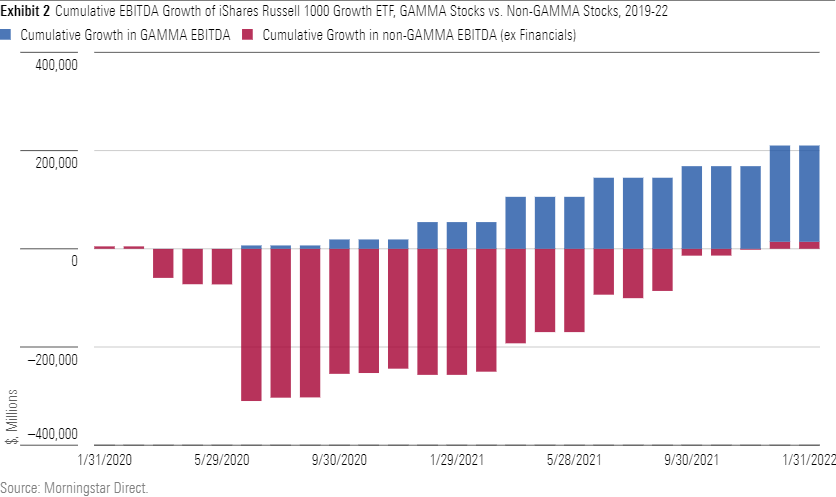 Portfolio holdings data suggest top-rated managers have a cautious attitude toward these companies, though mutual fund regulations also play a role. Within the large-growth Morningstar Category, there are 55 actively managed strategies that earn at least a Morningstar Analyst Rating of Bronze on one of their share classes. Of those 55 strategies, only four were overweight the basket of the index’s top 10 companies as of their latest reported portfolios.

SEC diversification requirements make it hard for most large-growth funds to even hold the GAMMAs at their current market weightings, let alone overweight them. To be considered officially diversified by the SEC, a fund cannot hold more than 5% in a single company in 75% of its portfolio. 41 of the 55 active large-growth Morningstar Medalists meet this rule, which essentially means they can make 25% of their portfolios as concentrated as they wish, but after that, the 5% limit kicks in. However, as of January 2022, Apple and Microsoft alone ate up over 23% of the index.

Holding both at market weights would prevent diversified managers from putting any more than 5% of their assets in any other stock. A diversified manager currently cannot hold the Russell 1000 Growth Index’s top three constituents at or above market weights without breaching SEC regulations. This is a big reason why nearly all actively managed large-growth funds are underweight the index’s biggest names. This has led some strategies, including T. Rowe Price Growth Stock (PRGFX), T. Rowe Price Blue Chip Growth (TRBCX), and Vanguard US Growth (VWUSX), to officially change to “nondiversified” mandates, which allows them to get as concentrated as they please. Still, the bulk of large-growth funds are structured to meet the SEC’s diversification standard.

Diversified managers face a real conundrum when it comes to the index’s top two stocks, especially. No matter how bullish they are on Apple and Microsoft, they have almost no wiggle room to overweight them. Instead, it leads many of them to bet against the two by owning proportionately less than the index. In fact, all 55 medalist strategies collectively underweight the two stocks. That could hamper these strategies if Apple and Microsoft continue to outperform the broader index and their managers can’t find opportunities among relatively smaller companies to make up for the lost ground. This issue affects most large-growth fund owners; of the $1.8 trillion of mutual fund assets in the large-growth category, $1.4 trillion sits in officially diversified mandates.

Still, there does appear to be legitimate bearish sentiment toward Apple. Only two medalists, American Century Select (TWSIX) and American Century Ultra (TWUIX), are overweight Apple, while nearly a third do not even own it. And of the medalists that do own it, their average weighting is less than half the index’s. Microsoft has more supporters; almost 90% of medalists own it, though they also keep it at a much smaller average weight than the index. After the top two holdings, the average medalist position in the remaining eight of the top 10 index constituents is generally at or above market weights, although almost half of the medalists avoid Tesla (TSLA), and more than 60% do not own Home Depot (HD). 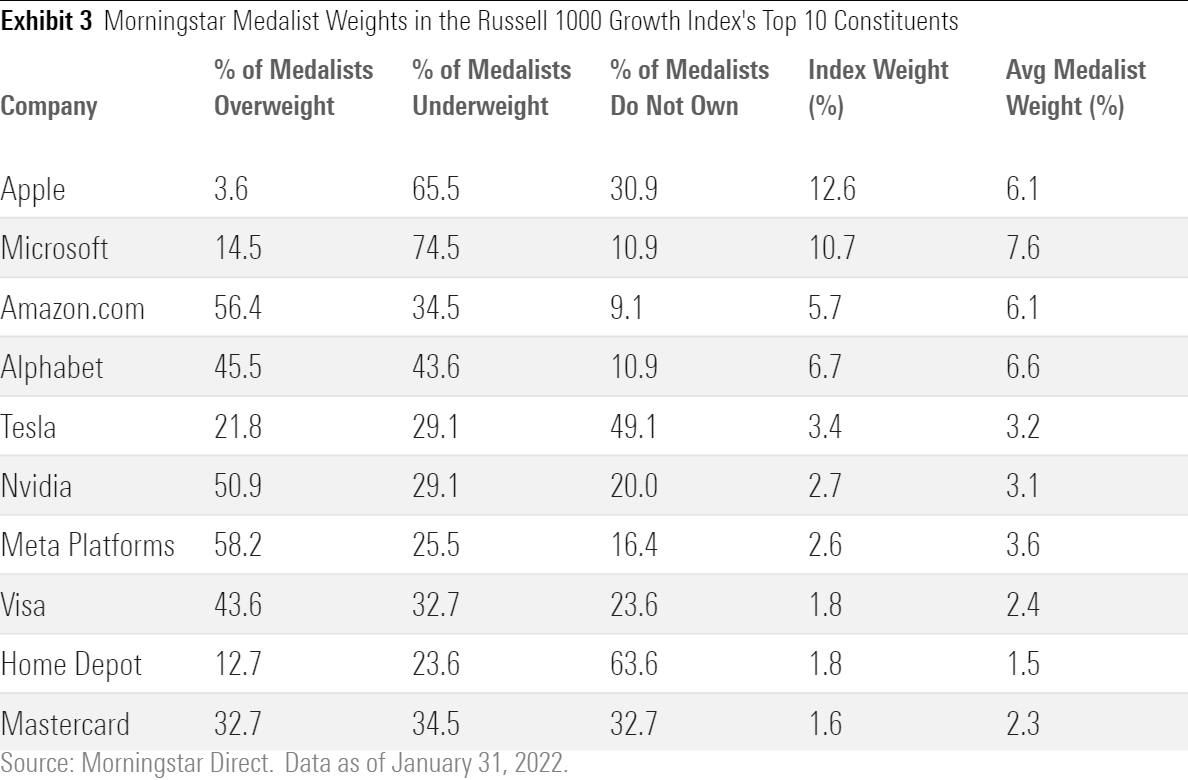 If the index gets more top-heavy, it will force investors in diversified strategies to increase their bets against the top names, no matter what they think of them. This may not be a bad thing; concentration levels rise and fall with the markets, but it is certainly going to be a major factor in how active large-growth managers perform against their passive competitors going forward.