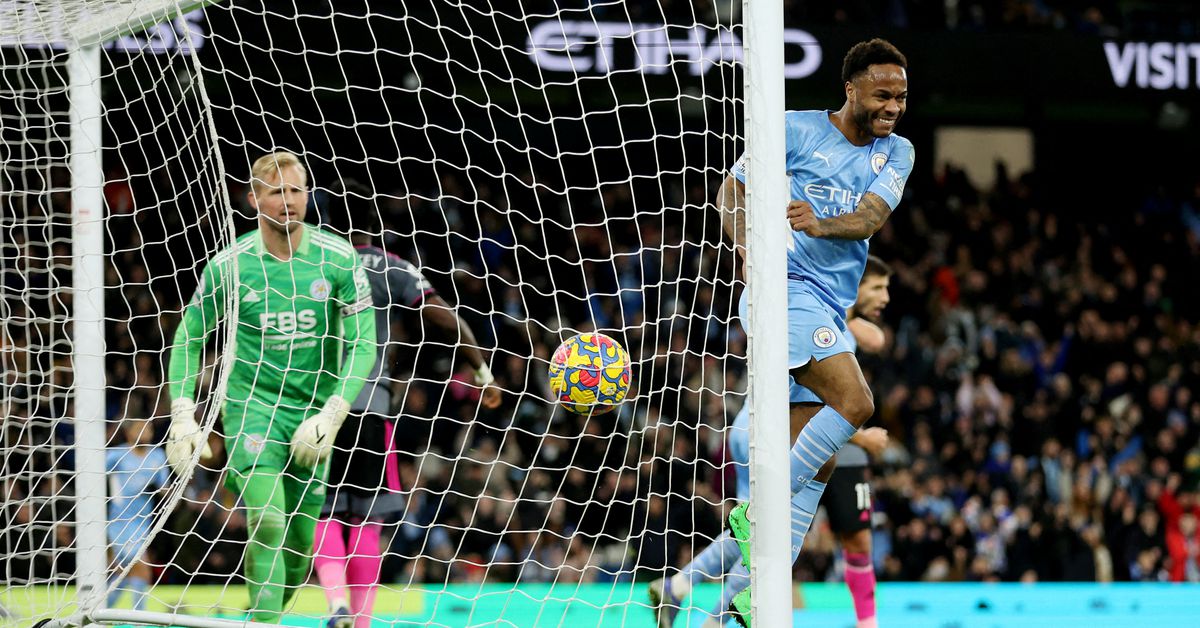 Dec 26 (Reuters) – Manchester City led the way in a bumper Boxing Day goal feast in the Premier League on Sunday with a 6-3 win over Leicester City sending them six points clear at the top of the standings.

The opening five games of the COVID-19 impacted festive programme delivered 26 goals with Arsenal romping to a 5-0 win away to bottom club Norwich City and Chelsea enjoying a 3-1 win at Aston Villa.

Pep Guardiola’s City are on 47 points with Liverpool, whose match against Leeds United was called off due to COVID-19 cases in the Yorkshire team, on 41 points.

Third-placed Chelseaare also on 41 points, while Arsenal move up to fourth place on 35 points.

City got off to a flying start, grabbing a fifth-minute lead through Belgian midfielder Kevin De Bruyne, before a Riyad Mahrez penalty put the hosts in control nine minutes later.

Things went from bad to worse for a weakened Leicester side with Ilkay Gundogan and another penalty, converted by Raheem Sterling, giving the hosts a four-goal lead inside 25 minutes.

Despite looking dead and buried, though, Leicester stormed back in the second half as goals from James Maddison, Ademola Lookman and Kelechi Iheanacho threatened to derail the league leaders.

But Aymeric Laporte’s 69th-minute header and Sterling’s late second took the champions over the line.

Arsenal’s fourth straight win came in convincing fashion at Carrow Road with Mikel Arteta’s side taking a sixth minute lead through Bukayo Saka who finished off a fine, flowing move.

Kieran Tierney doubled the lead just before the break with Martin Odegaard providing the killer pass for the Scotland left back, who struck a low shot into the net.

England forward Saka grabbed Arsenal’s third in the 67th minute with another low strike before Alexandre Lacazette was fouled in the box and got up to stroke home the spot kick in the 84th.

Substitute Emile Smith Rowe wrapped up the win with a simple tap-in during stoppage time.

Chelsea fell behind at Villa when a Matt Targett cross flew in off the head of defender Reece James but Jorginho brought Thomas Tuchel’s side level from the spot just before the break.

Romelu Lukaku, a halftime substitute, put Chelsea ahead with a fine glancing header from a Callum Hudson-Odoi cross and then in stoppage time he was brought down by Ezri Konsa and Jorginho again made no mistake from the spot.

Spurs stretched their unbeaten Premier League run under new manager Antonio Conte to six games thanks to a strong display against a Palace side reduced to ten men for the second half.

Lucas Moura created goals for Harry Kane and Son Heung-min and bagged one himself as Tottenham comfortably beat a Palace team for whom manager Patrick Vieira missed the game because of a positive COVID-19 test.

Palace had winger Wilfried Zaha was sent off in the 37th minute but by that time Spurs were already well on top.

Harry Kane had swept in the opener from Moura’s pass before Moura himself headed the second.

Son wrapped up the win with his side’s third from close range in the 74th minute.

James Ward-Prowse scored one and created another as Southampton took three points from their visit to London Stadium against a West Ham side that have gone five games without a win.

Southampton took the lead after eight minutes through Mohamed Elyounoussi but substitute Michail Antonio levelled for the Hammers in the 49th minute.

Ward-Prowse restored the away side’s advantage from the spot in the 61st minute, only for West Ham’s Said Benrahma to restore parity.

Jan Bednarek secured the first win since Nov. 5 for the Saints in the 70th minute after deftly turning in a curling free kick from Ward-Prowse.

In the day’s late fixture Brighton & Hove Albion ended an 11-game winless run as they beat Brentford 2-0 to move ninth — Leandro Trossard and Neal Maupay were on target before halftime.