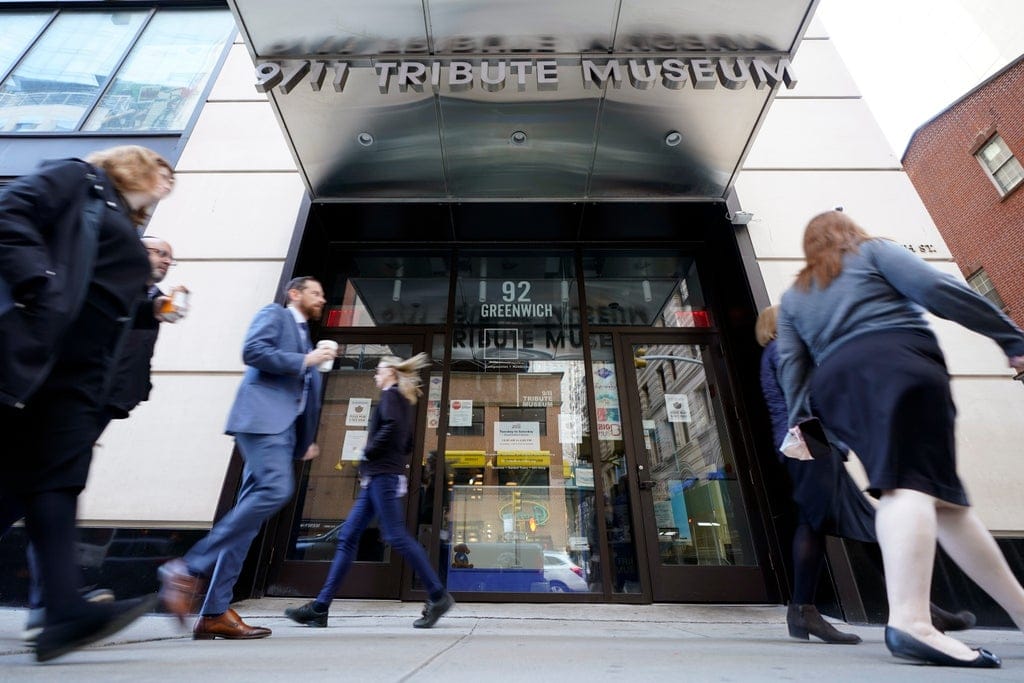 Years before the Sept. 11 museum was built at the World Trade Center, a storefront visitor center across the street opened to offer tours led by victims’ relatives, survivors and others with personal ties to the trauma and tragedy of 9/11.

Sixteen years and five million visitors later, what is now the 9/11 Tribute Museum is poised to close within weeks, its leaders say, barring a last-minute rescue from millions of dollars in debt.

“We’ve really been hanging on by a thread,” co-founder and CEO Jennifer Adams-Webb said, and it’s now “a make-or-break situation.”

While financial pressures have been building for some time, leaders say the museum has been pushed to the brink by the coronavirus pandemic, which hammered tourism on the heels of a costly 2017 move.

The 9/11 Tribute Museum traces its roots to 2004, when a group founded by victims’ relatives decided to turn a former deli, steps away from ground zero, into a focal point for commemoration of the 2001 terror attacks that killed nearly 3,000 people. The trade center was a massive pit and construction site in 2004, but visitors were already coming in droves.

“There’s a tremendous need to create a sacred place of remembrance, right here, right now,″ then-Major Michael Bloomberg said when the Tribute WTC Visitor Center (as it was initially called) opened in 2006.

It exhibited twisted steel from the wreckage, a photo gallery of victims, and other artifacts. But it became best known for walking tours of the trade center site, led by relatives of the dead, survivors, rescue and recovery workers and people who lived nearby on 9/11.

The center drew 100,000 visitors just in its first four months. Over the years, it has also provided over 900 volunteer tour guides with a cherished outlet for their grief, pain and memories.

“I’m able to talk about my son — it’s 20 years later — to people who want to hear about my son,” says co-founder Lee Ielpi, a retired firefighter and 9/11 recovery worker whose firefighter son Jonathan Ielpi was killed at the trade center. His father carried his body from him from the rubble.

Some guides have traveled from as far as northern Virginia to lead tours. Others have become such close friends that they still take cruises together, Ielpi said.

The center was dwarfed by the National September 11 Memorial & Museum, a $700 million, taxpayer-subsidized project that opened its memorial plaza in 2011 and a vast underground museum in 2014. The museum alone has drawn more than 18 million visitors and the open- air, un-ticketed plaza an estimated 55 million.

On Monday, when the Tribute Museum was closed for the day, at least a dozen people showed up at the door, thinking it was the national museum.

Tribute Museum leaders say it still plays a different and valuable role through its focus on guides’ firsthand accounts of living through the attacks and recovering from them.

“To have them tell you that tomorrow can be a better day and it’s up to us, it’s very powerful,” said Ielpi, who was also a founding trustee of the national museum. “We don’t want people to leave with hate or any kind of despair.”

The Tribute Museum has received grants and donations but relies heavily on admission and tour fees (currently $17 and $35, respectively, for adults).

Financial strains began in 2017, when the museum moved to a much bigger space a few blocks further from the trade center. The move exhausted the museum’s reserves and increased its rent, but leaders felt it was their best option because the old location was too small to host enough visitors to support a spiking rent bill there, Adams-Webb said.

The new facility allowed for school groups as large as marching bands in town for the Macy’s Thanksgiving Day Parade. However, visitor numbers initially dropped by about 30% as the museum strove to remarket itself, she said.

Numbers began bouncing back in the next two years, but then the pandemic shuttered the place for months in 2020 and spurred travel restrictions that took a heavy toll on a museum that draws 40% of its visitors from other countries. The picture began to improve after the US fully reopened to many vaccinated international travelers in early November, then was clouded again with the virus’ super-contagious omicron surge, Adams-Webb said.

The Tribute Museum’s parent organization got more than $300,000 in pandemic relief through federal Paycheck Protection Program loans that were later forgiven, Small Business Administration records show. Adams-Webb said the staff has declined from more than 30 people pre-pandemic to around 10 now, and that other cuts were made where possible. Expenses totaled about 3.6 million in 2019, the last year for which the parent organization’s tax records are publicly available.

See also  Invest your money to help Scotland and the world

Adams-Webb, who lost a friend who worked at the World Trade Center, said leaders have approached the national 9/11 museum about potential help or collaboration, but nothing has materialized. The 9/11 Memorial & Museum declined to comment.

Beyond a lifeline to deal with the current debts, Tribute also needs a partner to help figure out how to make it financially sustainable.

She said there’s still “a small window of opportunity” for someone to step in and save a facility “built by the community to fulfill the need this need that’s out there.”