Skip to content
Home News Skill Up Step Up: Charity which helps jobless youths ‘realise their power’ joins our campaign 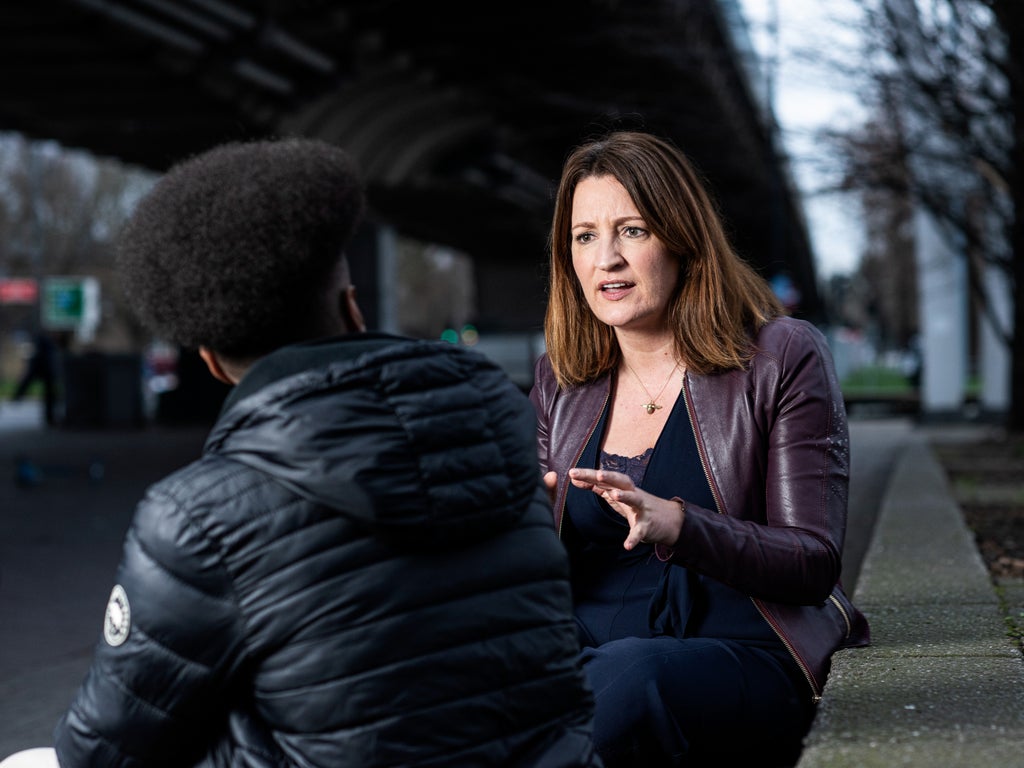 A charity that helps jobless young people by “calling out the adult” in them and making them realize “they have choices despite terrible things that have happened in their lives” is the fifth and final beneficiary of our £1m Skill Up Step Up initiative in partnership with Barclays LifeSkills.

Resurgo operates out of 12 centres, eight in London, and since being founded in 2004, has enrolled 7,500 jobless 16-24 year-olds onto its programme, 94 per cent of whom face at least one serious barrier to employment. They include youths with burdensome caring responsibilities, whose families have been involved with crime, who grew up in care, suffer mental health issues or low educational attainment.

It has led to Resurgo transforming the futures of teenagers like Nicole Sandwell, now an apprentice telecoms engineer, but who two years ago dropped out of school with severe depression after attempting suicide. And they have helped tearaways like Samir – involved in violent drug gangs until the arrival of his baby son prompted him to sign up for Resurgo’s six-week Spear Program – with life changing consequences.

It comes as the number of jobs pledged to unemployed youths who will be skilled up by our campaign passed 250, with 70 companies from a range of sectors – including financial services, construction, sports retail and hospitality – stepping up to offer the new opportunities.

Resurgo’s chief executive and co-founder Jo Rice said our campaign would help them reach even more troubled young people at a time of high youth unemployment. She added that although the aim was “to upskill them and make them work ready”, the “deeper goal was to help them navigate life and make sustainable choices – of which gaining employment is one key measure”.

She said: “The way we approach young people is to challenge their mindset. We set up debates where we say, ‘everything you do, you choose to do’, and they hash it out as a group. The big change comes when they shift from a victim to a power mentality and realize the options and opportunities that are available to them, despite their disadvantages.”

Samir, 24, from west London, is one such Resurgo trainee whose start to life was far from ideal. His parents of him came to the UK from Tanzania but left him behind as a baby to be brought up by his aunt and grand-mother-until sending for him four years later.

Samir said: “My mum had visited us occasionally but when I came to London, I basically met my dad for the first time. I was told, “this is your family” but they were strangers to me and for a while I was very quiet. We lived seven of us in a two-bedroom council flat. I shared the top bunk with my older brother while my older sister slept below. It was tight. Dad was unemployed and we were on benefits and I often had to miss school trips because we couldn’t afford it.”

At secondary school, Samir fell in with the wrong crowd and started selling cannabis. I have passed just one GCSE and took mechanics at college. At 19, his father passed away and Samir derailed.

“I started selling class A, getting involved with gangs and was in regular trouble with the police,” he said. “One day I got stabbed in the neck over a petty disagreement and ended up in intensive care. I lost a lot of blood. Doctors said, any deeper and I would have died. I remember lying in the ambulance, my dad had recently passed away and thinking, what am I doing to my family?”

It was a wake-up call, but Samir chose to ignore it. “I became more angry, more violent, dropped out of college and gave all my potential to the streets,” he said. It was only two years ago when his girlfriend got pregnant that he tried to reform. “My son was about to be born and I thought, I got to stop. I tried to get a legit job, I made loads of applications but I had no confidence at all.”

A friend told him about the Spear program and he enrolled last year. “I did it over Zoom. It opened my mind and helped me get rid of my ego. I stopped listening to the wrong people. It made me see I have potential and gave me the confidence to back myself.”

Ten months ago, Samir got a job with online grocery delivery company, Gopuff, and has been there ever since. He said: “They like me and want to promote me to a team leader. I feel happy and boosted and a responsible dad. It’s a huge transformation from where I was.”

For Nicole Sandwell, 19, who grew up in Islington, doing well academically wasn’t the problem. She got the third highest GCSE results in her school, but her home and social life de ella was unraveling and she suffered severe depression. She said: “I moved schools at the end of year 8 because of bullying and although my new school wasn’t as bad, I had few friends. By year 10 I had stopped talking to friends and them to me. I tried to do A-levels but I was unhappy and attempted suicide. I was in hospital for months and decided not to go back.”

After that Nicole felt “more listened to at home” but “still lost”. She said: “Me and my mother did not speak much because she was always at work and dad had his own problems. I felt I didn’t have a place in the world.” She made around 50 job applications but got nowhere. Then a case worker at Islington council told her about Resurgo.

She said: “That first Zoom was so hard because my confidence was low and meeting new people was not my thing. But I took a risk and expressed my individuality. I ended up feeling close to the other people on the course. That feeling of connecting – it made me come out of myself and realize I was not the only one struggling.”

Resurgo assess the progress of trainees by scoring them against a Work Readiness Indicator built around five themes – attitude, communication, professional behaviour, self-leadership and mindfulness of others. A score of six is ​​work-ready, seven and above as excellent. Nicole was a clear “excellent”.

“On the ‘hire me’ day, Nicole stood out. She was hired as an apprentice fiber-optic broadband engineer for G. Network, succeeding against stiff competition, and has been there for the last 11 months. She said: “Since Spear I feel a different person. My message to other jobless young people is this – ‘you’re not on your own, seek help, it will change your life’.”

Our campaign in a nutshell

What are we doing? We have launched Skill Up Step Up, a £1m initiative in partnership with Barclays LifeSkills to upskill unemployed and disadvantaged young Londoners so they can be “work ready” and step up into sustainable jobs or apprenticeships.

Why are we doing this? Youth unemployment in London has soared by 55 per cent to 105,000 since the start of the pandemic, meaning that 21 per cent of 16- to 24-year-olds are jobless at a time of record job vacancies of 1.17 million countrywide. This mismatch, caused largely by an employability skills and experience gap, is leading to wasted lives and billions of pounds of lost productivity for our economy.

How will it work? The £1m from Barclays will provide grant funding over two years for up to five outstanding, handpicked charities that provide disadvantaged jobless young Londoners with employability skills and wrap-around care to get them into the labor market and transform their lives. The charity partners we have announced so far are:

two. City Gateway: they will get young people work ready with a 12-week employability programme, including digital skills, a work placement, CV and interview skills and a dedicated one-to-one coach, extending to up to 20 weeks if they need English and/or maths qualifications, enabling them to gain entry level positions including apprenticeships in a wide range of sectors, including finance, digital media, marketing, retail, property and IT.

3. First Rung: they will help jobless young people into employment and apprenticeships by providing guidance, identifying career options, building their CVs and preparing them for interviews. Through coaching and mentoring, they will help them develop self-confidence, resilience, teamwork skills and pro-activity. Where necessary, participants will get help improving their English, Maths and digital skills. They will also engage with employers in North London to transform the lives of young people in their community.

Four. 2020 Change: This group based in Covent Garden takes jobless youths aged 17-30 – from under-represented ethnic groups or with low socio-economic backgrounds – and makes them work-ready. They do this through their part-time 10-week “I Am Change” programme, which works on “mindset adjustment” and teaches corporate etiquette, mindfulness, financial literacy and digital skills as well as traditional CV and interview skills. The course includes TV and film workshops and they provide links to the creative industries through their Mentor Match Up programme.

5. Resurgo: This charity works annually with 700 Londoners, aged 16-24, who face serious barriers to work. Their six-week Spear Program develops mindset, skills and attitude to enter employment, including building resilience and managing emotions. Trainees get a year of follow-on support and access to employment opportunities with corporate partners via Resurgo “hire me” events.

How can the young and jobless skill up? If you are aged 16-24 and want to upskill towards a job in hospitality, contact Springboard here.

If you want to upskill towards a job in any other sector, contact City Gateway here.

How can employers step up? We want companies – large, medium and small – to step up to the plate with a pledge to employ one or more trainees in a job or apprenticeship. They could work in your IT, customer service, human resources, marketing or sales departments, or any department with entry level positions. You will be provided with a shortlist of suitable candidates for interview. To get the ball rolling, contact the London Community Foundation, who are managing the process on: [email protected]

How can readers help? The more money we raise, the more young people we can skill up. To donate, click here