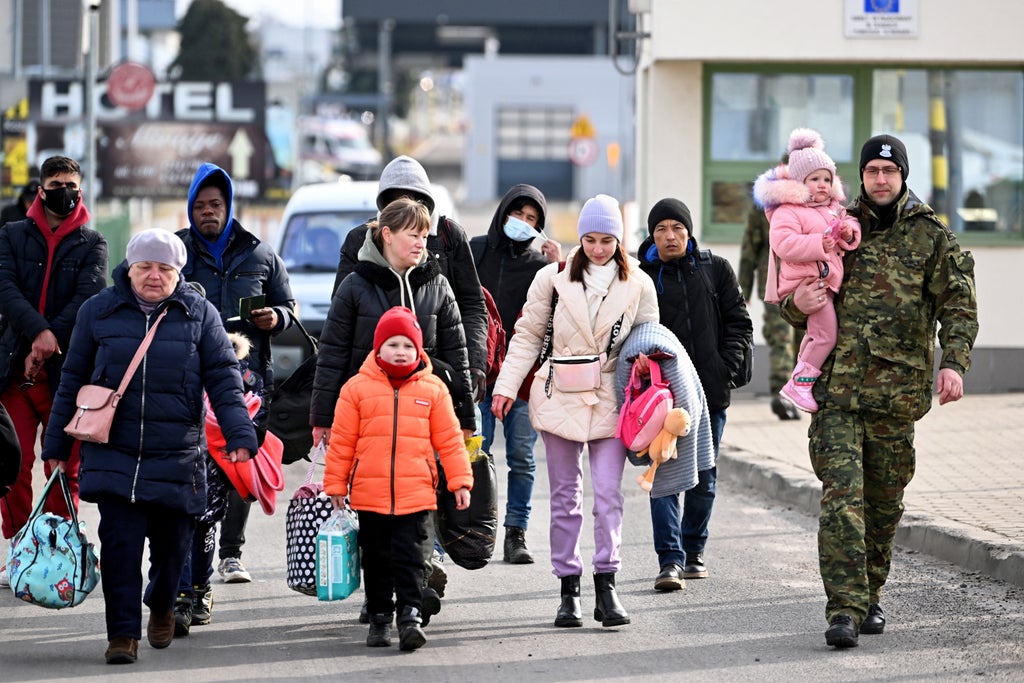 Ministers have been warned that “significant questions” remain about the humanitarian route for Ukrainians announced this week, as it emerged that many UK residents with loved ones who are fleeing the conflict are still unable to join them in Britain under the scheme.

The Home Office announced on Tuesday that it was expanding the route to include parents, grandparents, adult children and siblings of British nationals and people settled in the UK, and that a new sponsorship scheme was being established to help people fleeing the Russia invasion.

Home secretary Priti Patel said the offer was in the “best interests” of Ukrainian people and would see thousands of refugees welcomed to the UK, with normal requirements for salary or language tests waived.

However, the government has been warned that this still excludes swathes of refugees who would benefit from coming to the UK, such as partners or cousins ​​of British nationals, or close relatives of people in the UK on work or study visas, who are not deemed to be “settled”.

The Independent has spoken to UK residents who have said they are “disappointed” and “frustrated” after it emerged that they are still unable to bring their loved ones who have fled Ukraine to join them in Britain.

Lawyers and charities have also raised concern that there are likely to be delays in getting eligible people to the UK under the scheme, and called on ministers to temporarily introduce visa-free travel for Ukrainian nationals, in line with the approach taken in the EU, to prevent delays.

it eats like this The Independent ‘s Refugees Welcome campaign called on the UK government to set up a resettlement scheme to give Ukrainians fleeing the invasion sanctuary in Britain.

Shadow immigration minister Yvette Cooper said there remained “significant questions” about “gaps in the system and delays”, and that she remained concerned about whether this would deliver the “much needed support and sanctuary in practice”.

“We need a simple commitment from the Home Office that family members fleeing war in Europe are all welcome here in the UK and that they won’t be turned away just because their relative here is on a work or study visa rather than having permanent leave to remain, or if their relative is an aunt or uncle rather than a parent,” she said.

“There also needs to be a fast way for those who are not family members to be able to get sanctuary here without waiting for the community sponsorship scheme, which has previously been slow and small in scale.”

Immigration barrister Simon Cox, who has been supporting a number of Ukrainian nationals trying to join family in the UK, said the scheme announced on Tuesday had not yet been implemented, meaning most eligible people cannot yet benefit from it and may have to wait weeks before they can come to Britain.

“The Home Office should’ve started developing this scheme earlier. It has all the appearance of having been created today or yesterday afternoon. They’re making policy on the hoof,” he told The Independent.

“To get the policy up and running, they need to make it available on the website. They will then have to process these applications individually. During this time these people will need to have somewhere to stay elsewhere in Europe.

“If the government isn’t careful, if it doesn’t move quickly enough, there will be people waiting for weeks, running out of money, without a place to stay.”

Mr Cox said one way of avoiding these risks would be to allow visa free entry to Britain for Ukrainian refugees, adding: “There’s no reason why security checks can’t be done in the UK. It would be much simpler. They’re done on visa free nationals all the time.”

Mike Adamson, chief executive at British Red Cross, said the announcement was welcomed, but expressed concern that it would take “some time to put this into practice”, and echoed the calls for visa-free travel for Ukrainian nationals.

Caroline Coombs, of non-profit organization Reunite Families UK, which has been supporting people trying to bring their Ukrainian loved ones to Britain, said it “spoke volumes” that the latest announcement on family visas came after “huge public outcry across social media” .

“While we very welcome the latest amendment, we believe the Home Office must go further waiving visas for Ukrainian nationals needing sanctuary. If Ireland can open their doors and show truly decent humanity, why can’t we?” she added.

It comes after a poll by YouGov last week found almost two-thirds of British people would support the introduction of a resettlement scheme for those fleeing Ukraine.