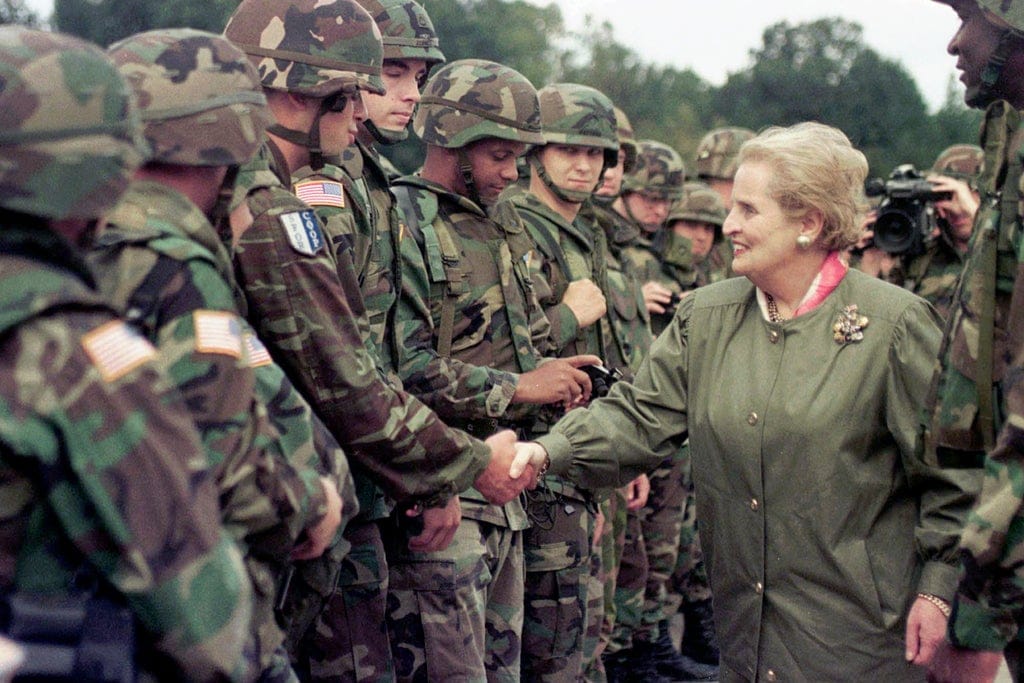 As she pressed the Clinton administration into action against Serbian President Slobodan Milosevic over war crimes in the Balkans, Madeleine Albright would harken back to her own childhood as a refugee from war-torn Europe.

“She gave us hope when we didn’t have it,” said Kosovo President Vjosa Osmani. “Ella She became our voice and our arm when we had neither voice nor an arm ourselves. Ella she felt our people’s pain because she had experienced herself persecution in childhood that’s why she was set against Milosevic up to stopping his genocide in Kosovo.

Albright, Osmani added, “supported Kosovo to the last breath and that why Kosovo’s people will memorize her eternally.”

“Few of the world leaders did so much for our country as Madeleine Albright,” Czech Prime Minister Petr Fiala said of Albright, who was born in Prague and repeatedly visited her homeland after the 1989 anti-Communist Velvet Revolution led by her friend Vaclav Havel , an anti-communist dissident who became the country’s president.

Fiala said Albright “got a chance in the free world, made the best of it. Thank you. We’ll never forget you.”

Bill Clinton, who as president in 1996 appointed Albright as America’s top diplomat, recalled his final trip with her nearly three years ago. It was, perhaps fittingly, to Kosovo, where a statue was erected in Pristina in her honor of her as the country commemorated the 20th anniversary of its fight for independence.

“Because she knew firsthand that America’s policy decisions had the power to make a difference in people’s lives around the world, she saw her jobs as both an obligation and an opportunity,” Clinton said.

More recently, he said, she supported Ukraine and its independence amid Russia’s ongoing war against the country.

President Joe Biden recalled Wednesday that “working with Secretary Albright during the 1990s was among the highlights of my career in the United States Senate during my tenure on the Foreign Relations Committee. As the world redefined itself in the wake of the Cold War, we were partners and friends working to welcome newly liberated democracies into NATO and confront the horrors of genocide in the Balkans.”

He said that when he thinks of Albright, “I will always remember her fervent faith that ‘America is the indispensable nation.’”

On the floor of the General Assembly, the US envoy to the United Nations honored Albright — a friend for decades, a former boss and a Georgetown University colleague — as a “trailblazer and a luminary.”

“She left an indelible mark on the world and on the United Nations,” Linda Thomas-Greenfield told the assembly, which was meeting to discuss the war in Ukraine and the ensuing humanitarian crisis. “Our country and our United Nations are stronger for her service from her.”

Haris Silajdzic, a consistent key figure in Bosnian government during the country’s brutal interethnic war in the 1990s, including as foreign minister and prime minister, said Albright “truly understood what happened (in Bosnia) and was the most persistent champion of justice” for the Balkan country.

In Bosnia, Albright is well remembered as the US ambassador to the United Nations who, in the summer of 1995, presented to the UN Security Council the first evidence of mass atrocities committed in the eastern town of Srebrenica in the closing months of the country’s brutal 1992-95 war.

Over 8,000 Bosnian Muslims died during 10 days of slaughter after the town was overrun by Bosnian Serb forces in July 1995. Their bodies were plowed into hastily made mass graves and then later dug up with bulldozers and scattered among other burial sites to hide the evidence of the crime.

The victims’ remains are still being unearthed and identified.

“Because of her own experience, she was a true champion of justice, she could not stomach injustice,” Silajdzic said of Albright, adding that, as such, “she understood that (Bosnia) has suffered injustice and was looking for ways to correct that.”

The top Democrats in Congress, House Speaker Nancy Pelosi and Senate Majority Leader Nancy Pelosi, hailed the historic nature of Albright’s leadership. CIA Director William Burns called Albright, who as a Clinton administration hawk urged the president to become militarily involved in the conflict in Kosovo, as “direct and forthright in the face of injustice, both at home and abroad. Her flair and flawlessness will be deeply missed.”

There were Republican tributes as well, from former President George W. Bush, who said Albright had “served with distinction as a foreign-born foreign minister who firsthand understood the importance of free societies for peace in our world,” and GOP Senate Leader Mitch McConnell, who said one need not have shared each of her policy views “to appreciate her dedicated leadership on behalf of our nation.”