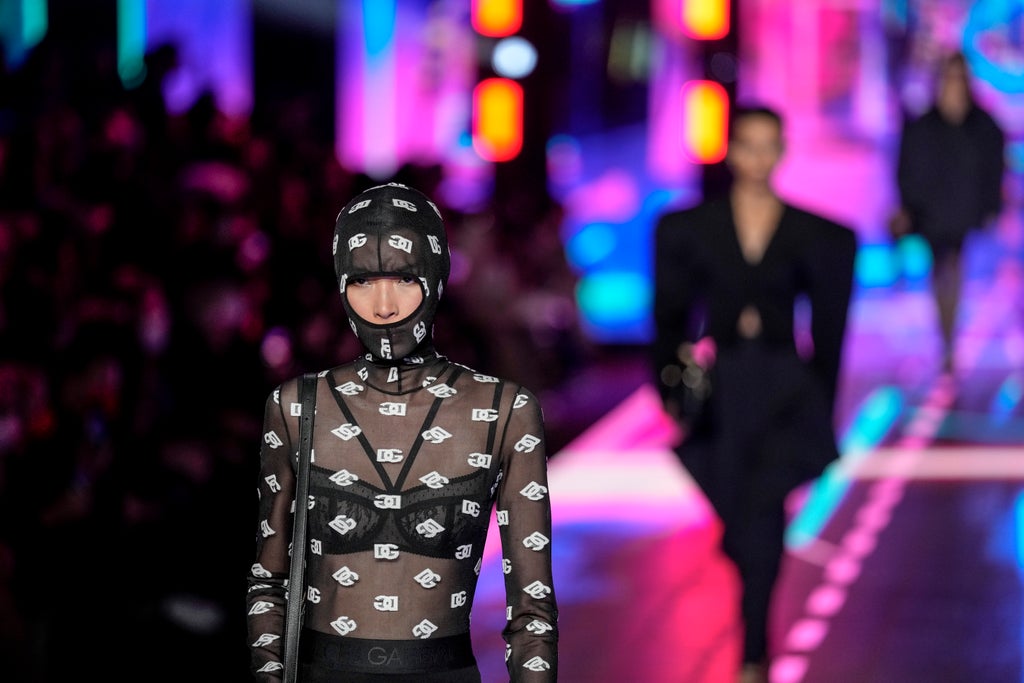 So far this week, Sharon Stone has sat appraisingly at Dolce & Gabbana, Rihanna and A$AP Rocky have rocked Gucci, and Kim Kardashian wore Prada, at Prada.

After two years of digital-physical mix, social distancing and travel restrictions that kept many overseas buyers and publishers away, there was a sense of return to some new normal, one now that includes war on Europe’s eastern fringe. Tens of thousands of people gathered in Milan’s central Piazza Duomo to demonstrate for peace on Saturday, crisscrossed by weekend shoppers and fashionistas.

Highlights from Saturday’s previews of mostly womenswear for next fall and winter include:

Want to be your own real life avatar? Check out the latest collection by Dolce & Gabbana, who brought the metaverse onto the runway.

Why leave all the fun to the digital universe, when there is a real-life version of a shiny red mini-dress with exaggeratedly puffy sleeves, or a shaggy Yeti-style coat in bold stripes or checks?

Whatever the real-life avatar, the catchword in Domenico Dolce and Stefano Gabbana’s new collection is sexy. The season’s stable are sheer stockings with garters, that peek out of short hemlines, through sheer lace dresses and even, improbably, from one-legged trousers. Yes, apparently, that innovation will be of some advantage in the D&G metaverse.

Corsets defined the shape of many coats and dresses, and also appeared as silky outlines on fitted black dresses, tops and jackets. For better moving from digital world to digital world, there were sleek fitted tops and leggings with shiny finishes worn under cutout dresses and skirts. Large 3-D-style sunglasses finish the look, along with stilettos. The designers also showed off-beat humor in a series of pod-like garments — coats, jackets and knitwear — designed to be worn protectively over the head, almost like a nun’s habit.

Sharon Stone sat in the front row alongside Sam Webb, Lady Kitty Spencer and Adam Senn and rapper Gunna. She looked appreciatively at looks as they past, mouthing, ”Gorgeous” at a strappy faux fur black dress and “Wow” at a furry white number.

The designers recently announced they were giving up fur this year, but that they would continue to work with furrier artisans on synthetic alternatives to maintain the craftsmanship.

Each Marni look appeared out of nowhere, on an undefined runway inside an abandoned warehouse with dirt floors and overgrown with greenery.

The models walked as though stunned through the crowd, each followed by a hooded torchman guiding their way wearing a uniform of trousers with dragging hems and spikey plastic shoes.

The models themselves each wore a creation by creative director Francesco Rizzo, but also an object from their own wardrobe, part of Rizzo’s growing collaboration with a community around the brand that he calls collaborators. Elaborate head-dressings, including teddy bears sticking out of knit caps, twisted felt and wool, or wire devils ears, gave a sort of zombie menace to the slow, irregular procession.

Rizzo himself walked in the show, midway, wearing a geometric sweater he knit himself in two days, distressed trousers from the new collection and a worn tuxedo jacket that belonged to his grandfather.

“Things in our wardrobes become the meaning of who we are. Sometimes you forget about these things,” Rizzo said afterward. “Everyone has brought their objects. Each one is collaborating in different ways. This is part of the game of what we are doing together at Marni.”

From the dark cavernous space, the crowd spilled into makeshift feast of fruit and cakes, bread and cheeses, served on mix matched china and silver under a bright blue sky.

One collaborator, Izzy Adams from Los Angeles, wore a bespoke pleated floral dress created by Rizzo, that looked like it had ripped and frayed after taking a tumble with a can of blue paint. She layered it with childhood T-shirt decorated with palm trees that once fit and is now a crop top. It’s her fourth show of her with Marni. “There is a lot of really interesting people on board,” she said, as one model posed on the banquet table, holding up a glass of wine.

Designers Lucie and Luke Meier are redefining Jil Sanders’ minimalism with artistic gestures and intricately tailoring that give sweep to the silhouette.

Jackets in the new collection had a bell shape that hovered over mini skits; straight coats had built-in capes, worn over short flouncy skirts; flat bows adorn shift dresses on the straps or across the front. Necklines were defined with big V bibs, or nautical lapels. The textiles are mostly wools and crepes, some textured, but there were also soft silky dresses with neat foulard ties at the neckline.

“Every garment has the dignity and subtlety of couture,” the designers said in notes.

Reflecting the cool contemplative nature of the collection, the models walked around a runway decorated with classical sculpture. The color palette was soft, including off-white, butter yellow, pink and lilac gold.

Milan designer Arthur Arbesser received his inspiration for this season’s prints through a sort of divine intervention. By sheer chance, the priest who baptized the Vienna-born designer saw him listed as the costume designer for a Berlin production of “Der Rosenklavier. ”

”He recognized my name (after some four decades) and thought I might be the kind of person interested in photos of Baroque fabric prints in a museum in Salzburg, and he sent me the CD,” Arbesser said.

The images were sometimes just scraps, showing baroque florals in myriad colors, Arbesser turned it into a patchwork print, overlaid with his own brush strokes and elements from . Another print is taken from his own water paint scratch sheet, with streaks of colors and sharp black scratches.

He pulled it together in a forgiving silhouette that ranged from wrap skirts with sporty boxy jackets, pretty dresses with angel sleeves layered with handknit scarves and flourishes. Looks were topped with a Dante-styled cap, tied neatly under the chin with a nod to the 700th anniversary of the great Italian’s death celebrated last September.