Skip to content
Home News Sexual violence towards women as ‘weapon of war’ to rise after Russia’s invasion, campaigners warn 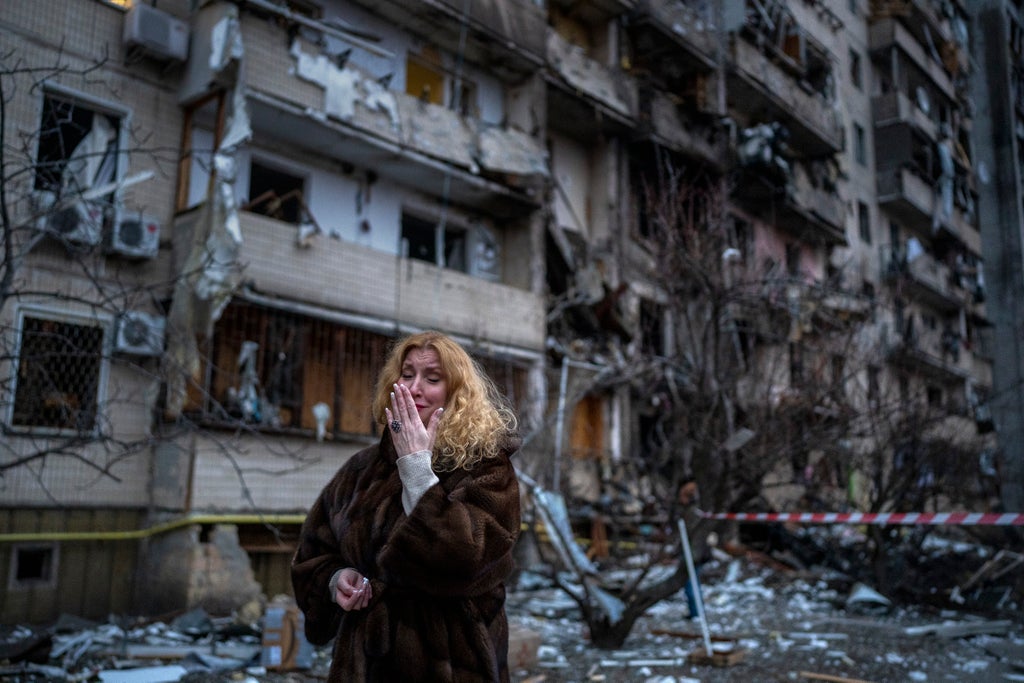 Increasing numbers of Ukrainian women will endure sexual violence wielded as a “weapon of war” in the wake of Russia’s invasion of the country, campaigners have warned.

Leading human rights organizations told The Independent women are likely to be among those hardest hit by Russia’s “full-scale invasion” of Ukraine, noting they have already “suffered” badly during the bloody eight-year conflict between Russian-backed rebels in the separatist east of Ukraine.

The warning comes after the Ukrainian authorities estimated more than 100 people have been killed since Russia launched an attack on Ukraine under the orders of President Vladimir Putin. Leaders around the world have warned Russia’s invasion could lead to the largest war in Europe has been seen since 1945.

Russian tanks approached the Ukrainian capital of Kyiv on Friday morning as the city was hit with gunshots and explosions, with residents told to retaliate with Molotov cocktails.

Steve Cranshaw, director of policy at Freedom from Torture, told The Independent Russia’s “track record” meant he envisaged torture and human rights violations will rise in Ukraine in the wake of Russia’s escalation.

“Torture is a deadly litmus test and the world needs to react if we do indeed see what those of us who care about torture most fear,” Mr Cranshaw, who specializes in the region, said.

The campaigner, a former foreign correspondent in the Yugoslav wars, said: “We saw torture when Moscow was seeking to impose with dramatic force in Chechnya. The pattern of torture became absolutely notorious. And rape was definitely part of that.

“Again and again in the context of conflict, we see torture used as a form of punishment and violation. It is mindless violence with terrible consequences for those who suffer from it.

“In the context of war, women are often targeted as a form of brutal dehumanizing, with rape, including gang rape, routinely used as a weapon of war. Many of the survivors who come to us from Sri Lanka to the Democratic Republic of Congo have suffered terribly in this.”

Mr Cranshaw argued the events which have unfolded in eastern Ukraine in recent years are “deeply worrying on a number of levels”.

He said: “Given the way President Putin’s Kremlin and Moscow forces behave, it is hardly surprising we have seen significant and really worrying reports of torture committed in eastern Ukraine in recent years. Sadly it seems we are going to see that now with this illegal mass invasion.”

Mr Cranshaw added: “The fact we know that Russian forces have already committed torture and will continue to do so is another reminder of the terrible lawlessness of these days”.

“The torture and other ill-treatment by armed groups is epitomized by their cruel treatment of women in custody,” Yulia Gorbunova, senior Europe and Central Asia researcher at Human Rights Watch, said when the report was released. “To our knowledge, many detainees are being held incommunicado, in appalling conditions, and without access to a fair legal process or proper medical care.”

Previous research by Amnesty International warned women in conflict-ravaged parts of Ukraine’s east are at “heightened risk” of gender-based violence in spite of “significant developments” in the nation’s laws.

An estimated 14,000 people have lost their lives to conflict between Ukrainian government forces and Russia-backed separatists in eastern Ukraine and the Donbas region since 2014.

speaking to The Independent from a bomb shelter in the Ukrainian capital of Kyiv, Ms Pokalchuk said: “It will have a bad impact on women in the country. Domestic violence and sexual violence rises in wars.

“Medical systems soon won’t work because of the many injuries to civilians. All war first has an impact on civilian women – old women and young women. Women civilians will be suffering from the situation much more because they are generally in a more vulnerable position in Ukraine because of patriarchy. This is the same in many countries and conflicts.”

Ms Pokalchuk, who previously worked as a lawyer at the European Court of Human Rights, said she was “scared” by the situation Mr Putin has unleashed in Ukraine.

“We didn’t expect the attack to be so big. We thought conflict might arise in the eastern part of Ukraine. Not all the territories,” she added.

Ms Pokalchuk warned some of the shelters are in poor condition and do not look safe enough to enter, saying: “If airstrikes happen, it looks like they will fall down”.

Her remarks come as Mr Putin urged the Ukrainian military to oust their own president, Volodymyr Zelensky.

She said: “That is always a concern for women in situations of conflict. Women traditionally have to take care of the health of children and their families and look after themselves last. Access to health could be a serious problem.”

Ms Denber said there was already a “severe” dearth of doctors, specialists and equipment in eastern Ukraine.

“We are talking about reproductive healthcare, preventive services like cancer screenings, for cervical cancer, breast cancer, and antenatal care,” she said.

“There is a likelihood that large numbers of women and children will be displaced,” Ms Denber said. “These were the sectors of the population most represented among displaced groups in earlier phrases of the war.”

The campaigner noted that more than a million Ukrainians were displaced before the current escalation began.

Ms Denber added: “We are extremely concerned about the safety and protection of civilians from military attacks from air strikes and shelling strikes. Ukraine has been at war for the last eight years but the war has escalated to a colossal scale. We have not seen this before.”

She noted the Geneva Convention bans attacks which are indiscriminate, “especially using weapons that can’t distinguish between military objects and civilian infrastructure”.

“Cluster ammunitions and anti-personnel landmines are prohibited by international treaties as they can’t distinguish between anything. These weapons are in Russia’s arsenal. There is serious concern about attacks in densely populated areas.”

Ms Denber said such attacks were serious violations of humanitarian international law and raised “acute” concerns about the safety of civilians in Ukraine.