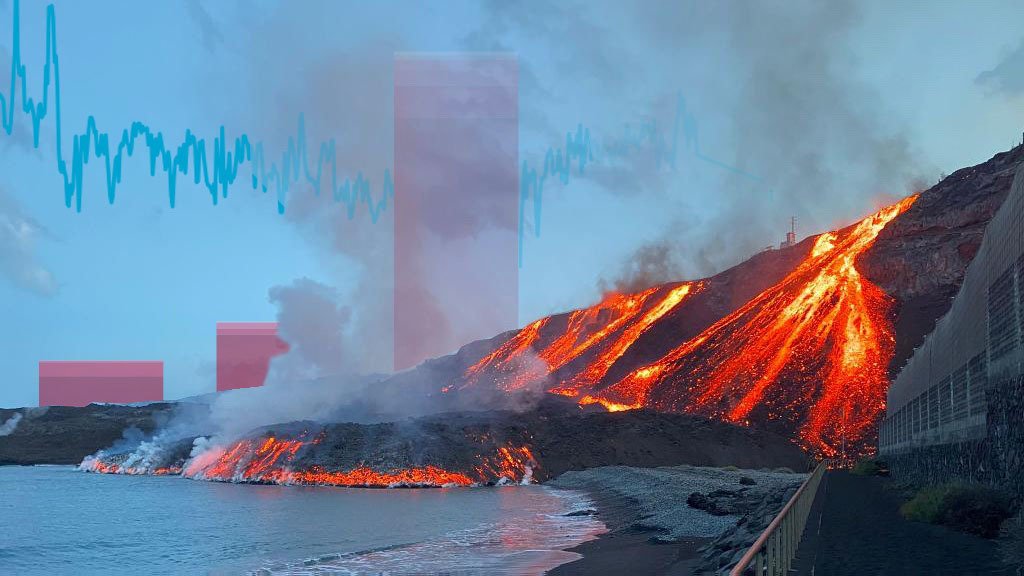 Are fulfilled two months of eruption on La Palma and scientists are still waiting to see if the brake pattern detected in recent weeks. Meanwhile, the lava from this unnamed volcano continues to flow into the sea and has already buried more than 1,000 hectares and 2,600 buildings.

“There is a whole complex feeding system of the volcano and it is normal that in the eruptive dynamics there are these episodes of intensification and after recovery of previous levels, “Carmen López explained Thursday. The scientific spokesperson for the Canary Islands Volcanic Emergency Plan (Pevolca) and a geologist for the National Geographic Institute (IGN) insists on continuing” while waiting to see if keeps the trend. “

This Friday the President of the Government, Pedro Sánchez, will receive the European Commissioner for the Environment in Santa Cruz de La Palma, Oceans and Fisheries, Virginijus Sinkevičius, who begins a two-day visit to the island. This is the summary of the effects of the eruption in Cumbre Vieja in seven keys.

1. Twelve coladas and four entry points to the sea

Throughout these two months of eruption, the La Palma volcano has found its way to the sea.

From the primal laundry that devastated the Todoque neighborhood in the first week of the eruption until the most recent, which originated this Wednesday and is already about 300 meters from the coast, the magma that erupted from the bowels of the earth first spread along the southern slope, bordering the Todoque mountain and reaching the sea on September 29.

Later, the lava threatened to destroy the municipality of La Laguna, and it was not until last November 10 that a new wash found the coast at the now-defunct Los Guirres beach.

In recent days there have been a slight upturn in activity and a higher emission of pyroclasts. However, those responsible for Pevolca emphasize that the long-term trend continues to be downward.

In these 60 days of eruption, the area covered by lava has grown to 1,040 hectares and the lava delta that continues to form over the sea occupies 43 hectares. The maximum width between runs is 3,200 meters.

The president of the Canary Islands, Ángel Víctor Torres, has advanced this Thursday the pfirst calculations on the economic damage produced by the volcano: between 550 and 700 million euros. This figure is more than 1% of the Canarian GDP, which would allow access to the solidarity funds of the European Union for the reconstruction of the island.

The map that appears on these lines shows the farmlands cataloged by the Copernicus satellite. The Cabildo de La Palma estimates that there are 314 hectares, equivalent to 30% of the entire affected area.

The most damaged crop is the most common: banana trees, with 187.3 hectares (which on the map is represented jointly with other fruit trees). The vines follow, with about 60 hectares damaged, and avocados, with 25.

In recent days, representatives of the Government of the Canary Islands have held meetings in Brussels to ensure the shielding of European aid for those affected by the eruption. Two councilors of the Canarian Executive have had a meeting with the Director General of Agriculture of the European Commission, Pierre Bascou, and his team, with the aim of maintaining the same level of aid for the agricultural and fishing sector in the 2021 campaign and thereafter despite for its sale to be lower as a result of the effects of the volcano.

From a satellite view, the Copernicus Emergency Management Service estimates that there are about 77 kilometers of roads destroyed and 3.3 kilometers possibly damaged. However, after crossing these data with the Local Equipment Infrastructure Survey (EIEL), the Cabildo reduces the figure to 66,023 meters.

Lava has also affected 1.5 kilometers of the Tacande road and 933 meters from the Todoque road. In addition, the Canary Islands authorities are already working to rebuild, in an initial period of one month, the disappeared access Puerto Naos (LP-213).

The Cabildo de La Palma reduces the more than 2,600 buildings that the satellites consider destroyed to just over 1,400 when comparing these data with the registry of the General Directorate of Cadastre. Nevertheless, most of these buildings are still residential (1.181).

On the other hand, the volcano has affected 67 industrial buildings, 34 leisure and hotel establishments and 13 public buildings such as schools.

For now, lhe Cumbre Vieja eruption has affected 2,120 people residing within the volcano’s perimeter and there are more than 7,000 evacuees. To date, 483 people continue to live in shelters, another 416 are staying at the Fuencaliente hotel and 67 in Los Llanos de Aridane. In addition, another 43 dependent people are being cared for in insular health centers.

The seismicity It is another factor that experts use to measure the activity of the volcano. In the last few days, it’s been intense, with intermediate levels on Wednesday and more felt by the population than in recent weeks. However, it continues to decline and for now the long-term stability trend is maintained.

The same goes for the tremor signal, which intensified to decrease in the last hours and to be at a low level.

The scientific and technical committees of Pevolca also remain attentive to the air quality. To keep an eye on her, measure both the gases released by the volcano and the ash particles that emanate.

In the first case, the most monitored are ozone (O3), nitrogen dioxide (NO2) and sulfur dioxide (SO2). According to the Dos Pinos measurement station, in Los Llanos de Aridane, the first two have remained at a good or acceptable risk level in the last month. Conversely, sulfur dioxide, one of the least breathable, has reached too high values and experts have shown their concern about the forecast of rains in the next few hours.

When combined with water, the gases that come out of the mouths of the volcano can be transformed into sulfuric acid, hydrochloric acid, carbon monoxide, hydrogen, helium, and radon; all of them components of acid rain.

Is about very fine fragments of rock product of the explosions of the volcano. When the thickness is more than 2.5 cm, its accumulation can cause roof collapse in structurally vulnerable buildings or due to an increase in their density when mixing with water.

Although volcanic ash poses a very low health risk, breathing its particles can affect the airways of some people, hurting their eyes and causing an abrasive and irritating effect on the skin.

The wind is another fundamental factor because it displaces the particles. Although in recent days it was blowing from the north and has allowed air quality to improve, it is expected that in the next few hours it will roll to the west, which may compromise the operation of La Palma airport and perhaps also the airports of Tenerife and La Gomera .