Skip to content
Home News Sergi Barjuan: “Xavi has to take a step forward to give Barça back where it deserves” | sports 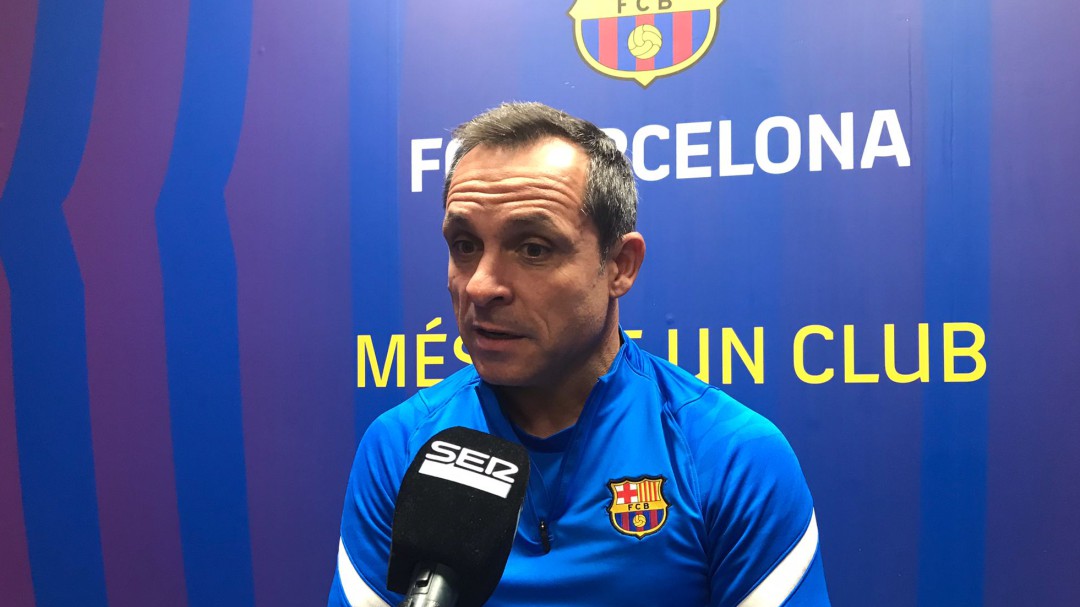 The ‘Què t’hi Jugues!’ from SER Catalunya spoke this morning with Sergi Barjuan, FC Barcelona B coach, in the first interview that the coach has offered since he coached the first team. On whether it was a brown or a gift to train Barça’s first team, Barjuan has been clear: “How many people would have wanted to be in my position … When they propose it, you must assess the pros and cons, but the balance is towards the pros. It could have turned out better or worse, but I’m very happy and satisfied, “said Barjuan on the microphones of SER Catalunya.

The coach of the Barça subsidiary explained that he was aware that the passage through the first team was punctual: “It is not difficult to return to the routine of Barça B after being in the first team. I was clear that it was for a moment. I tried to enjoy it and contribute the maximum that I knew, but it was clear that I had to go back to the subsidiary “.

Regarding the moment that FC Barcelona is living, Barjuan has affirmed that the situation is critical, but that it must be faced in a positive way: “The situation is to be sad, worried and a little anguished. I highlighted the word joy so that they would see that in the end, when things are most accepted, is when you see it with positivism. I think it went well, although unfortunately the three games were gray when Celta tied us. “

“It is a moment that I think the club needs Xavi. He has to take a step forward to return Barça where it deserves. I see him qualified”, said Sergi Barjuan in the ‘Què t’hi Jugues!’ on the arrival of Xavi to the Barcelona bench. In addition, the subsidiary’s coach has been clear in stating that Barça must fight for the League. “Competing in the League is a requirement that Barça has. The players are trained to withstand this pressure. I think the least we should do is demand ourselves to fight for the League. In this League there is no one who stands out much, and that is a benefit “said Barjuan.

The matches on the first team bench

In the ‘Què t’hi Jugues!’ Sergi Barjuan has valued his short stage on the bench of the first team of FC Barcelona. “I am satisfied. We had not won away from home and we won. The goal is there and must be sought. If with few resources we manage to score three goals away from home, Xavi is able to find the way to see a defensively and offensively strong Barça”, has affirmed the Barcelona technician.

Barjuan has also analyzed in SER Catalunya what happened to the team in Balaídos, when Celta came back three goals in the second half. “In the first play of the second half I already said: ‘Oysters, what’s going on here? Problems arise, we start to sink more and more and we can’t get out of the cave. This is ultimately the experience we have in the cave. field. We have an average age of 23 years, “explained the coach.

“I wrote a message to Koeman the next day. We were chatting for a while. I had talked a lot with him before they dismissed him and I think we have had a lot of affinity. Afterwards we have not spoken anymore”, explained Sergi Barjuan in the ‘Què t’hi jugues! ‘ from SER Catalunya.

On the other hand, the current subsidiary coach has regretted that the coaches depend on the results of their team to assess their work: “We are marked by the results. It is a pity because you can work the same and depend on a moment or a player make one move or another. Even if you want to do things very well, you don’t depend on yourself, you depend on whether or not 15 players have their moment. “

The irruption of Nico and Gavi

On the level that Nico and Gavi are exhibiting in the Barça first team and asked if he is doing well with “freaking out so much with them”, Barjuan has been clear. “We are so low that we must catch ourselves to something. What we would do well would be to take responsibility away from them. They need the help and protection of veterans to continue playing. They have their feet on the ground and are well advised,” he replied.

His past at Barça

Sergi Barjuan has also highlighted three players in the history of FC Barcelona and of whom he has very good memories. “I always remember the three R’s: Romario, Rivaldo and Ronaldo. They are all different, but they are players who made a lot of difference. The first day I got to the dressing room they put the box office next to Romario and he said: ‘Little boy, come here by my side. ‘I’ve been lucky enough to do something that I liked a lot, “said the current subsidiary coach.

The future of the farmhouse

Finally, Barjuan spoke about the situation of young footballers who can play an important role in the future of the FC Barcelona first team. “Alejandro Balde needs time. We must try not to lose a year. He is at an age of learning,” he said and also spoke about Ilias Akhomach. “He has many abilities. He has to learn to make the right decisions at the right time. In the future he will be a player who will give us many joys,” he explained.