Today, Monday, the first of the five days of strike of the week in the metal sector of Bizkaia is held, called by the unions ELA, CC.OO., LAB and UGT. Unions have encrypted the follow-up strike by 85%, while the president of the employer FVEM (Basque Federation of Metal Companies) has highlighted on Radio Euskadi that the follow-up of it is not being total.

The unions have provided the participation data minutes before the start of the demonstration called for today, which started at 11:30 am from Plaza Euskadi in Bilbao. The march has come together with the weekly protest of the pensioners in the Arriaga. The pensioners have concentrated, as usual, in front of the City Hall and then have marched through El Arenal until coinciding with the Metal protest in the Plaza Arriaga.

At that point, two communiqués have been read. “We will show mutual solidarity and the defense of claims that, in part, are specific, but are mostly common, especially the demand for decent public pensions for today and for the future,” said the Pensioners’ Movement. of Bizkaia.

According to union representatives, the follow-up has been 85% “in both large and small companies.” “What we are asking for is fair and feasible”, they have pointed out, while they have warned the employers that “it is not only worth mentioning the proposals but that they must be provided with content.”

First thing in the morning, pickets they have barricaded Elorrio e Iurreta. Specifically, in Elorrio they have set tires on fire and caused the N-636 road to be cut off for several minutes. In Iurreta, an incendiary barricade has kept the N-634 road cut off for ten minutes as it passes through Iurreta until it has been withdrawn by Ertzaintza agents.

On Durango Unknown persons have crossed several containers at 07:30 hours, some of them burning, and some vehicles in different streets of the municipality, among them Larrasoloeta street. The Ertzaintza has identified two people and has opened proceedings against them within the framework of the disorders generated in Durango. 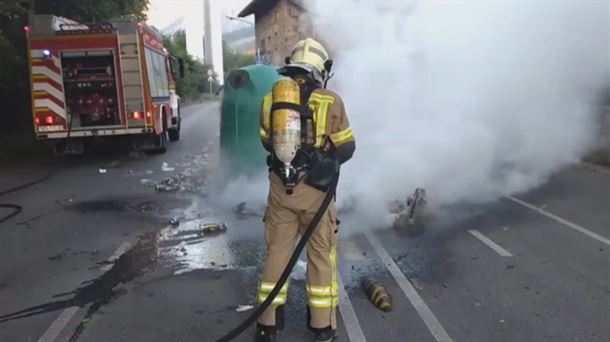 More of 50,000 workers are called to the strike in metal companies in Bizkaia between today, Monday, and Friday, October 4, in a call that is added to the five strikes carried out between the months of May and June.

The unions ELA, CC.OO., LAB and UGT have made a “clear and firm” call for a strike in the sector, to all metal workers in Bizkaia, in defense of the agreement, after rejecting the last proposal of the employer’s association, considering that it is still far from their demands.

The Lehendakari Iñigo Urkullu, who spoke at a conference at the Forum Europe, referred to the call for a strike. He has affirmed that he is “absolutely sure” that the Biscayan Federation of Metal Companies “has done everything possible” during the last months to try to reach agreements. On the contrary, it has questioned the will of the unions to agree.

Faced with those statements, LAB has requested the resignation of the Lehendakari, Iñigo Urkullu, for “turning his back” on the workers and for “siding with the employers.”

“Along with the overwhelming and admirable response shown by the workers over the last few hours, we want to denounce the statements made this morning by the Lehendakari Iñigo Urkullu, who has clearly and publicly positioned himself on the side of Confebask and FVEM , proving to be very far from the workers and at the orders of the employer “, has denounced LAB.

During the week they have organized several demonstrations in Bilbao and other towns.

Tomorrow, Tuesday, October 1, they have summoned two demonstrations at 11:30 am. One will depart from the Zelaieta de Amorebieta-Etxano park and the other from the Erandio metro stop.

The Wednesday, October 2, have called a rally at Gran Vía 85 in Bilbao, in front of the Basque Government headquarters.

The Thursday, October 3, two demonstrations will tour Sestao and Basauri starting at 11:30 am.

The Friday, October 4, a demonstration with two columns will tour Bilbao at 11:30 am. One will depart from San Mamés and the other from Deusto to converge at the Sagrado Corazón.

The unions recall that their main demands are to obtain a salary increase of the CPI plus 2 points in tables and of the CPI plus 1 in real wages, the right of subrogation, the eventuality control and the temporary employment agency and the adoption of “effective measures” in gender equality and occupational health.