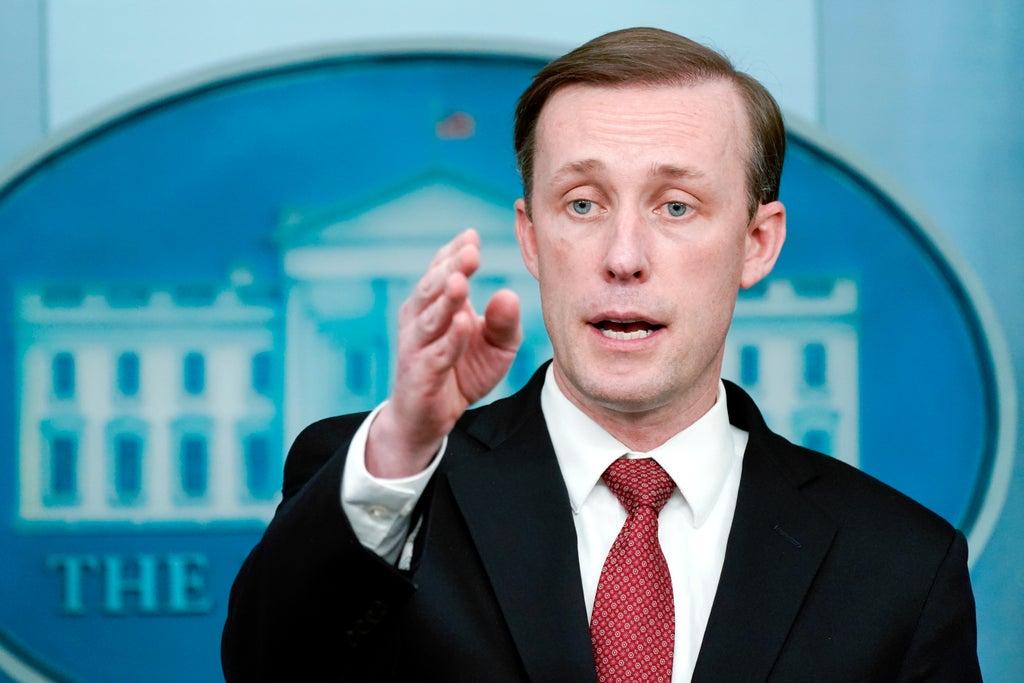 Stopping short of legislation to impose sanctions on Russia, the US Senate is considering a resolution in support of Ukraine as senators are eager to respond to Russian President Vladimir Vladimir Putin’s aggression but deferential to the White House’s strategy to avert a crisis in Europe.

White House national security adviser Jake Sullivan briefed Senate leadership Monday afternoon amid fast-moving developments. President Joe Biden and Western leaders are working swiftly to persuade Putin not to invade Ukraine, an attack the administration warns could unfold in a matter of days. Biden’s administration is able to impose devastating sanctions on Russia that would cut across the country’s economy, with or without congressional action, senators said.

Senators emerged from the closed-door session suggesting all options remain on the table.

Sen. Bob Menendez, DN.J., the chairman of the Senate Foreign Relations Committee working to assemble the legislation, said, “Either we’re going to have a sanctions package …” or “We should express the Senate’s position vis-à -vis the support of Ukraine, at a minimum.”

The top Republican on the panel, Sen. Jim Risch of Idaho, said even a Senate resolution backing Ukraine would carry weight: “It sends a message.”

Senators are racing time as Putin’s military has amassed at the Ukraine border and in neighboring Belarus as Washington works with Western allies to prevent what experts warn could become a wider war in Europe. The Senate is poised to recess at the end of the week, and lawmakers want a unified response before then.

There is broad support in the Senate for imposing sanctions on Russia as a powerful foreign policy tool, but Republicans and Democrats differ on the details and timing. There have also been differences over the Nord Stream 2 energy pipeline between Russia and Germany, although those may have become resolved after Biden said last week the energy line would not continue if Russia invades Ukraine.

Senators considering the options Monday also said the White House has its own strategy, signaling they may hold off as the administration pursues its approach. They said the administration can impose sanctions on its own, regardless of congressional action.

“We don’t want to complicate their lives by restricting their ability to engage in diplomacy with Europe,” said Sen. Chris Murphy, D-Conn., a member of the Foreign Relations Committee. “I think the deeper we got into it, the more complicated and nuanced the balance became.”

Sen. Marco Rubio, R-Fla., said administration action could be quicker than the sanctions Congress is considering, especially with the House away until the end of the month.

“The administration has all the authorities that it needs under law to level the sanctions that many of us have talked about doing,” Rubio said. “I don’t want anyone to believe that somehow the US won’t be able to respond with sanctions along with our allies if there is an invasion.”

Still, senators are eager to act. A resolution would not carry the weight of law, but would nonetheless provide a record of Senate support for Ukraine’s independence in the face of Russian aggression. Such a measure, still being drafted, could come together for a vote, senators said.

Late Monday, senators spoke about the strong, bipartisan support the Senate has shown for years toward Ukraine. Congress has approved aid and supplies, and many lawmakers have traveled to the country to stand alongside the Ukrainian people and their leaders.

Tensions have mounted in the region as Putin demands assurances from the US and its allies that it won’t accept Ukraine into NATO, a pledge Washington has rejected.

Shaheen says bipartisan discussions on Ukraine are “an opportunity to show the rest of the world we are united.”