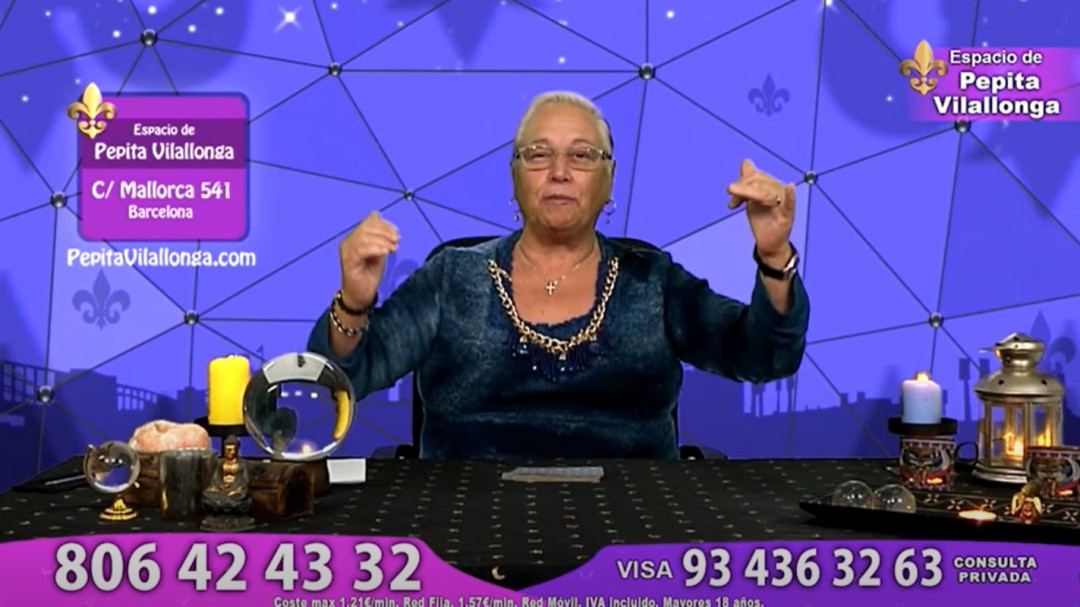 The Barcelona Court has sentenced the tarot reader Pepita Villalonga and two other people for a continuous crime of fraud and they will not be able to carry out activities related to esotericism during these two and a half years of sentence. Of course, they have been acquitted of belonging to a criminal group.

According to the sentence, the three defendants took advantage of the personal situation of the woman they scammed into paying them more than 40,000 euros under the excuse that they helped her avoid an alleged imminent death.

The woman had an anxious depressive picture that had been dragging on for a long time. She was aware of the scam to such an extent that she attended the consultation with a tape recorder. The invoices he asked for never came either. The complaint was filed by the victim’s family.

Consultation for an evil eye

The events now sentenced date back to November 2016, when the alleged victim, RP, went to an esoteric office located on Mallorca Street in Barcelona linked to the seer Villalonga, and ended up paying, according to the complainant, three amounts of 4,400, 10,000 and, finally, 17,000 euros to remove an “evil eye” and the risk of death that weighed on her and that the accused had predicted.

During the trial against the seer and two other defendants, held on November 8 in the eighth section of the Barcelona Court, the public prosecutor did not impute these three people on understanding that there had been neither fraud nor “deception”, while that the private prosecution requested eight years in prison for a continuing crime of fraud and another two for belonging to a criminal organization.

However, in his sentence, the judge condemns the popular seer and the other two defendants to two and a half years in prison for a continuing crime of fraud, since the court considers the facts to be proven, as well as a disqualification from all economic activity referred to esotericism for the duration of the sentence, although it acquits them of the crime of belonging to a criminal organization.

He gave up asking for compensation

During the hearing, the woman resigned to request compensation from the accused, an end that now confirms the sentence.

During the trial, the victim related that he did not believe in esotericism, but that at that time he was going through a bad time, in a “black hole”, and that when he saw the popular seer on television, he decided to contact the local to arrange a visit.

Contrary to the defendant’s version, he affirmed that she sent the letters to him in 30 seconds and said: “You have a very strong evil eye, you have a dead man on your back, neither you nor your dogs arrive at the end of the week “And she added that the seer immediately told her that there was a worker on the premises who could help and cure her.

“I was so frightened”

This worker, the defendant DL, and the son of the seer, FB, “convinced” her to perform a series of rituals to remove the evil eye, for which they asked for 4,400 euros, as explained by the woman, who stressed: ” I was very scared, I was very scared. “

About three days later, after working “day and night”, the defendants informed her that the evil eye she had was “very, very strong,” the woman continued during her testimony in court, so they told her that ” to stay alive “they had to call a Vatican chaplain, who would have to travel to Jerusalem to continue with the rituals, for which he had to pay another 10,000 euros.

After this second payment, the alleged victim said that on December 2 they asked him for an additional 17,000 euros to be able to finish the job, an amount that he paid, but that already that day he began to suspect, and that when on the 7th of that month they asked him for other 10,000 euros if he wanted “everything to be fixed before Christmas”, he no longer paid.

In the sentence, the magistrate gives credibility to the victim’s account, in the sense that he was predicted an “imminent death”, which caused him a “state of fear and insecurity, due to the family and health problems that he dragged from years ago. “

“Taking advantage of that vulnerability, of which the accused immediately realized, and with the aim of benefiting economically at her expense,” he “agreed” with the other two defendants in that spirit, “who also warned” from the first moment “his” emotional fragility “, maintains the magistrate in his resolution.

According to the court, the defendants transmitted to the victim “a severe fear for his life” and a “state of panic” that led her to comply from that moment on with everything the defendants were telling her, thus achieving, and by means of various tricks, a patrimonial displacement of the woman in favor of those “.

In this sense, it stands out that at the time of the events the woman was 57 years old and was in a “state of great fragility and emotional vulnerability as a consequence of an anxious-depressive syndrome with emotional stress that she had been dragging on for years” .