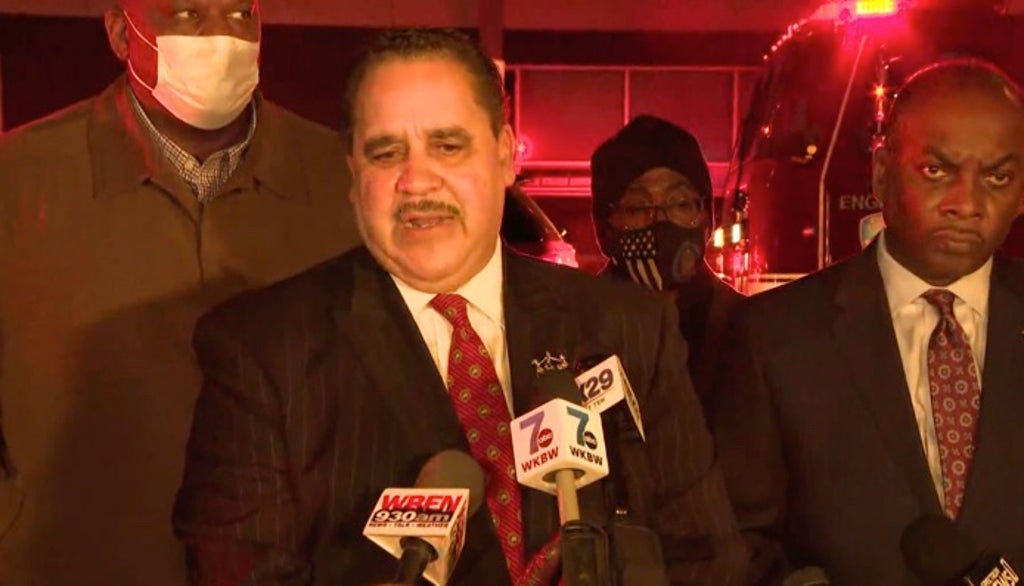 The security guard wounded in a shooting at a Buffalo high school has revealed he was shot in the leg trying to stop a student being attacked, as a teachers’ union claimed the campus has been “out of control” for years.

Brad Walker, a 27-year-old security guard, was shot and a 14-year-old male student was stabbed multiple times in the parking lot of McKinley High School in New York state on Wednesday afternoon.

Mr Walker, who had been working as a security guard at the school for about a month, toldWIVB he saw the student being attacked and was running towards him to try to help him when he was shot once in the leg.

He was taken to ECMC for treatment and was discharged later that night. He is expected to make a full recovery.

The teenage victim underwent surgery at Oishei Children’s Hospital and is said to be in a stable condition. Police initially said the boy had been shot but announced on Wednesday night that he had actually been stabbed multiple times.

A manhunt is now underway for the suspect, with police confirming on Wednesday night that they did not have anyone in custody. The Independent has reached out to Buffalo PD for an update on the investigation.

Neither a suspect nor the teenage victim have been named by officials.

Hours after the incident, the president of a teachers’ union claimed that the high school has been “out of control” for years and a teacher was attacked by students a few weeks earlier.

Buffalo Teachers Federation President Phil Rumor told SpectrumNews that he wasn’t surprised when he heard about the violence at McKinley High School, saying that there have been several recent reports of fights, teachers have repeatedly warned of dangers and students are “afraid to come to school”.

“The school has been out of control and we’re hearing that students are afraid to come to school,” he said.

Mr Rumore said that there had been warning signs at the high school for some time and claimed that McKinley is “far worse” than other schools in the area.

“This school is far worse than any of our other schools,” he told SpectrumNews.

The union president called for action to be taken in addressing poor student behavior at the school.

“What we need to do is have a plan where there is discipline and there are consequences and wherever the students need help, they get help,” he said.

“But we need the involvement of the whole community.”

Mr Rumor told WKBW that he had heard of violence from students against teachers in the last few weeks including a recent attack on a female member of staff.

“She was thrown to the ground and some of the girls were kicking her,” he said.

He added of Wednesday’s violence: “Well unfortunately we saw it coming.

“We’ve been warned about the discipline at McKinley for years now.

“Something has to be done. Enough talk let’s see some action.”

Buffalo Public Schools Superintendent Kriner Cash referenced what he described as “bumps” at the school in a press conference outside the high school on Wednesday night.

He said that steps had already been taken to address violence at the school including adding 15 staff members but that the incident showed a need for a “reset”.

“There has been a plan in place, for some time, with McKinley, because we’ve had bumps here, much of the year,” he said.

“We put additional teachers, additional staffing in the hallways so that we can monitor the passing of classes.

He added: “Nothing this year has risen to the level that we have seen here today.”

The superintendent said the school would remain remote for the next three days but that this could continue until the end of the month if necessary.

“What I will do with my staff, I’ve already directed them, is we are going to reset McKinley in a phased approach,” he said, adding that this would involve speaking with students, teachers and all staff.

Buffalo Police said that Wednesday’s incident unfolded at around 3.45pm – just 20 minutes after the school day ended at 3:25pm.

BPD Deputy Commissioner Joseph Gramaglia said in a press conference that a fight broke out between two groups of people in the school parking lot.

The situation escalated into gunfire when an individual pulled out a gun and fired multiple shots.

Two victims – the student and the security guard – were rushed to hospital while the school and nearby SUNY Buffalo State College were plunged into lockdown.

Around 100 students were still inside the school several hours later after the building was secured. They were reunited with their panicked parents who had gathered outside on Wednesday evening.

At around 6:30pm, SUNY Buffalo State College lifted its shelter in place on the campus.

Get ready for take-off: The new ELEMIS Summer Bloom Cleansing Balm has landed