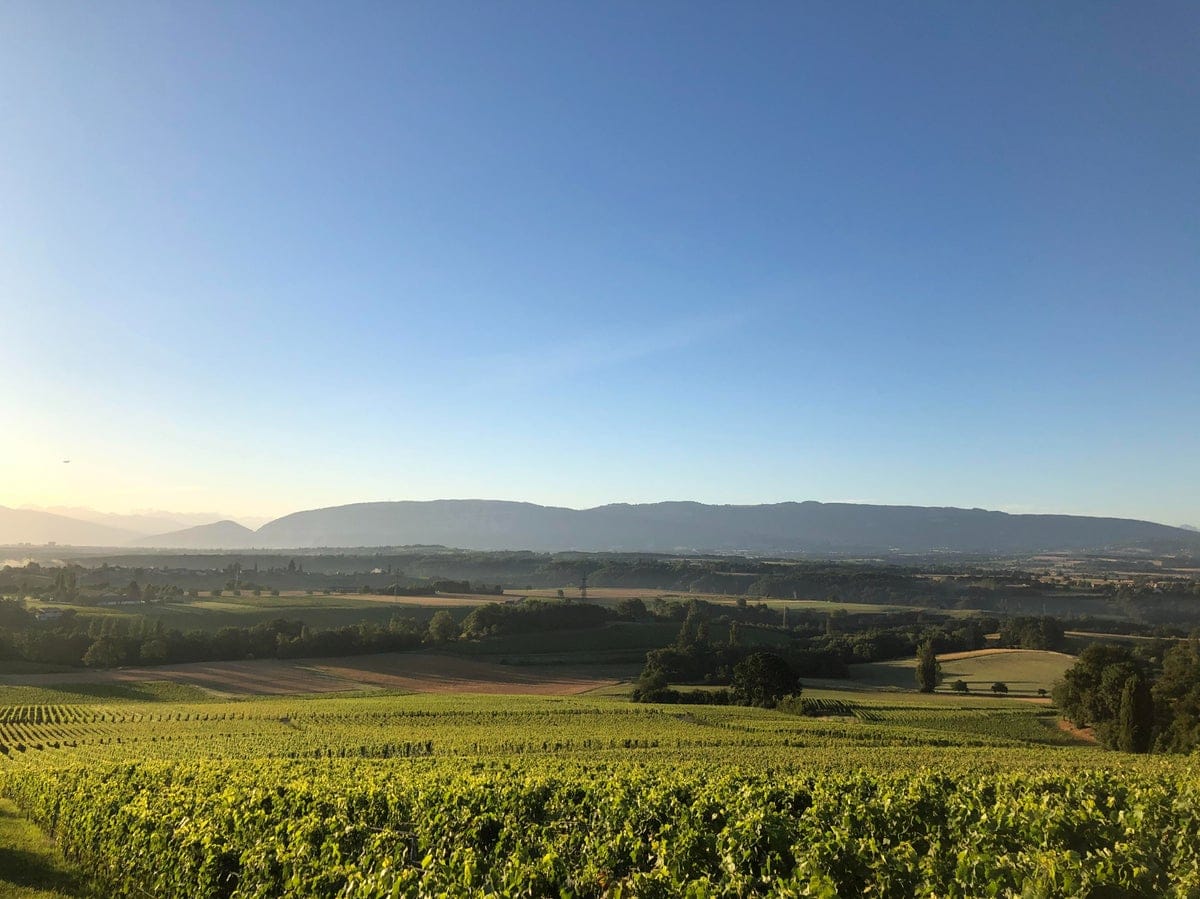 Yot’s 11am on a sunny Saturday morning and I’m sipping a cold glass of Chasselas in a tranquil Swiss village a cork’s pop away from the French border. The only sound is the light breeze rustling in the tall trees lining this quiet country road and the occasional bleating of a nearby bird. In the distance sits the colossal Mont Blanc, Europe’s highest mountain; in the opposite direction, I can glimpse the verdant Jura Mountains. Life feels good.

I’m around 12km from central Geneva in a place called the Dardagny region. Situated on the southwestern banks of Lake Geneva, this vast plateau has been home to Switzerland’s third-largest wine producing canton for centuries. And if you haven’t heard of it? Well, that’s just how the Swiss like it.

Contrary to its Italian and French neighbours, this central European nation’s wine industry remains one of its best-kept secrets. Only around 1 per cent of the wine produced here is exported, meaning very few people outside of the country get to try it, let alone know about it. But don’t make the mistake of thinking this is a small-scale enterprise: Switzerland ranks 10th in the world in terms of vineyards-to-country surface-area ratio, produced 100m liters of wine in 2018, and comes fourth globally in annual wine consumption per capita.

Determined to sample some of this exclusive tipple for myself, I leave the city center and head for the hills. While it’s possible to reach Dardagny by bicycle in about an hour, we take the responsible approach and opt for a tuk tuk tour. Cast aside all harrowing memories of white-knuckle-rides through polluted city streets, however: our electric-powered chariot, which has a maximum speed of 45km, has space for four passengers, a canopy, thick woolen blankets to keep cozy, seatbelts and a central table with designated slots for your wine glass. Our congenial driver swings by a local fromagerie to collect a charcuterie board to help soak up the booze, and we’re off.

And what a civilized excursion it is. We’re quickly meandering along quiet country roads and climbing up past yellow fields of rapeseed, goats with tinkling bells and sweeping vineyard panoramas. Dardagny itself is an ISOS, or Swiss Heritage Site of National Importance – an accolade awarded in 1978 for the development and preservation of its architectural heritage – and was immortalized by the 17th century landscape and portrait painter Jean-Baptiste-Camille Corot.

We draw to a halt outside Domaine Les Hutins, a family-run operation dating back to the 18th century. Here, we sample a selection of red and white wines, beginning with a classic white Chasselas. This delicate and elegant wine is ineffably quaffable, unequivocally linked to the area and a firm favorite on discerning dinner tables throughout Geneva.

We follow it with a dry Chardonnay, another popular grape from the region, then a deliciously fruity Sauvignon Blanc. Here, the vignerons wait a few days before pressing the grapes, which brings color and aromatics to the wine. We sink a smooth Sauvignon Rose with tropical notes, before graduating to the reds: Gamaret and Pinot Noir, juicy and spicy and a pleasure to drink.

The clock is ticking, so we take a large glass of the intense Bertholier rouge back to our waiting tuk tuk and hit the road. Ordinarily, we would have made a pit stop at Domaine de Perrières, a family estate since 1794 in the village of Peissy, located opposite a 1,000-year-old chapel but, fortuitously, our visit has coincided with the annual Marché du Vin – a yearly wine festival attracting over 30 Swiss winemakers. It’s here we meet the affable Cyril from the aforementioned vineyard, who plies us with citrusy Sauvignon Blanc, a silky Rosé de Gamaret, and an award-winning La Chênaie Gamay de Peissy. We take our final gulp from Stéphane Gros and reflect on the decorum displayed by our fellow drinkers. Granted, it’s still only 1pm, but the event has been open since 11am (and we can’t imagine our British countrymen and women showing the same gentility).

It’s not the only knees-up for oenophiles. Nyon’s Fête de la Vigne, Lausanne’s Caves Ouvertes Vaudoises, a 12-hour Wine Night, complete with house and techno DJs, and the legendary Fête des Vignerons – a Unesco-designated celebration dating back to 1797 that’s so epic, it only takes place every 20-25 years – are just a handful of the wine-related activities taking place in the area throughout the year.

At this stage, a mellow inebriation has befallen us, so we withdraw to our lodgings. Visitors keen to continue the decadence can sleep off the booze at the ultra-luxe Four Seasons Hotel des Bergues Geneva; dating back to 1834, it holds the accolade of being the city’s very first hotel and benefits from a first-rate position on Lake Geneva. Enjoy a dip in the rooftop pool and a steam in the spa, before feasting on inventive Michelin-starred food at Il Lago on the ground floor. Sante!

Geneva is easily accessible from the UK by train: travel from London to Paris on the Eurostar, before catching the TGV-Lyria high-speed train from Paris’s Gare de Lyon.

British Airways, Swiss and easyJet all fly direct from the UK to Geneva.

Tuk tuk tour for three hours, seating up to four people, costs CHF340 (£279). Holders of a Geneva City Pass, offering entry to more than 50 attractions in the city, can get a 20 per cent discount.