Skip to content
Home News Second round: Boric and Kast make an unusual joint defense of the democratic transition six days after the elections in Chile | International 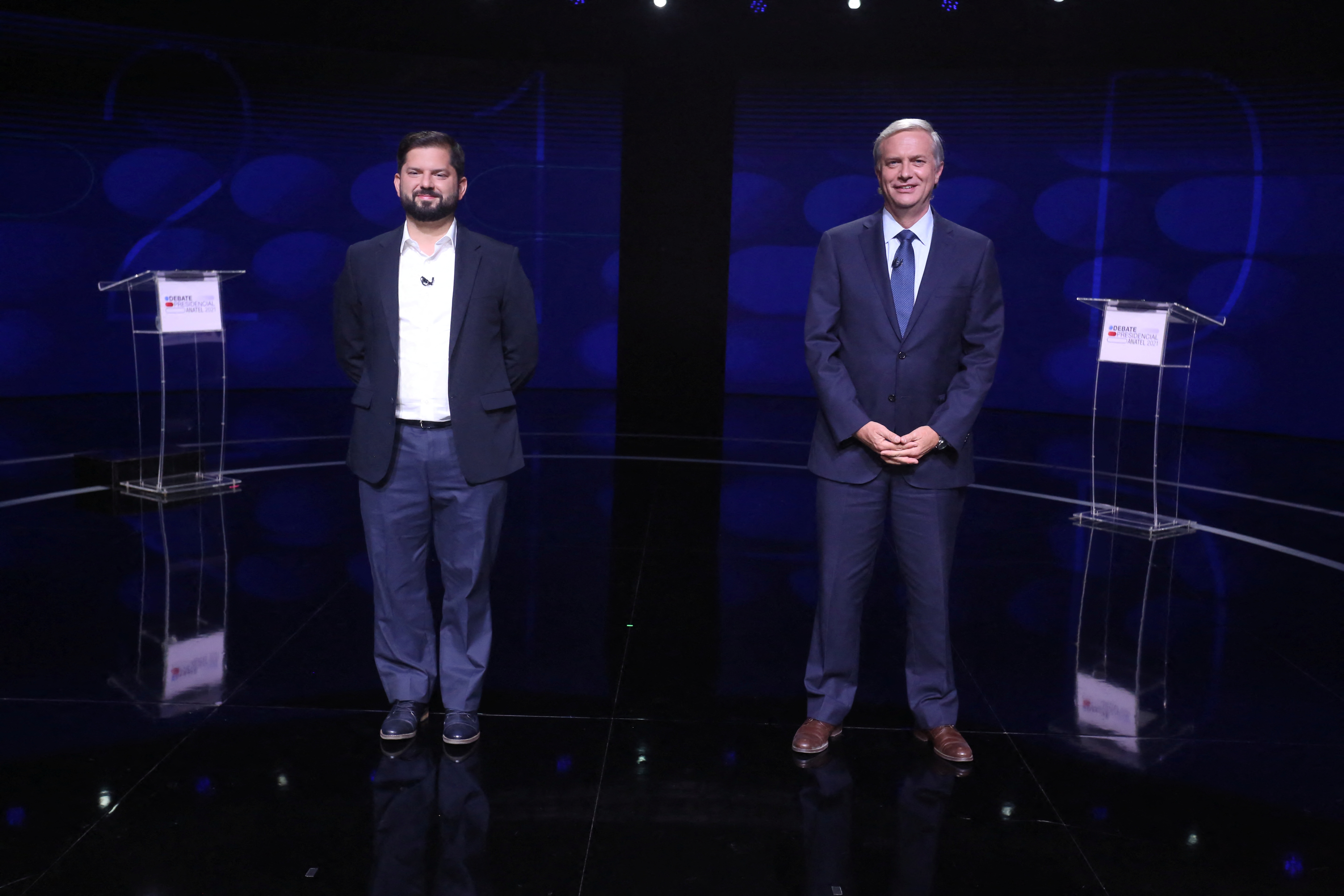 The two candidates for the presidency of Chile have met for the last time in a face-to-face debate, with only six days left until the second round. The leftist Gabriel Boric and the extreme rightist José Antonio Kast exchanged accusations, defended the efforts to moderate the most radical edges of their respective programs and surprised with a joint defense of the years of the democratic transition, which until now they had harshly criticized .

On Sunday, December 19, Boric and Kast will bring two opposing views of Chile to the polls. The first, at the head of a coalition that has the Communist Party among its members, proposes to strengthen the State to guarantee basic universal rights such as education and free health. His speech also flies the flags of minority rights, sexual freedom and gender equality. The second, presents himself as the leader of the restoration of the order lost after the massive protests of 2019. A fervent Catholic, he opposes abortion, considers the claims of minorities a “gender ideology” and promotes a minimal State that intervenes the least possible in economic development. Both, however, have been moderating their positions since the first round of November 21, needing as they are to add the vote of the center.

The debate was the public display of these twists, in many cases radical. Boric reminded Kast and Kast Boric of them, while both tried to link them to pragmatism and the capacity for self-criticism that, in his opinion, every good candidate must have. Above all, the defense they made of the years of the Concertación, the coalition of Christian Democrats and socialists that governed Chile from the end of the dictatorship, in 1990, until 2010, when they yielded La Moneda to the right was surprising.

See also  McDonald's, Coca Cola and KFC slammed as they continue to operate in Russia despite invasion

“I have a good opinion of the second Government of [Michelle] Bachelet ”, said Boric, after his candidacy grew with harsh criticism of what was done during the 30 years of the transition. The candidate even said that in recent days he had met with Bachelet and former socialist president Ricardo Lagos. “My duty is to listen to those who have experience and have been generous,” he added. Kast, in turn, preferred to vindicate Patricio Aylwin, the first president of democracy, because “he was the one who had the most complex situation.” “It had to lead an authoritarian government to a full democracy, and there a good part of these 30 years was played. We were a model for the world and we have to recover that ”, he said.

The debate was developed in three blocks, with the first two dedicated to structural issues such as governance, taxes, culture and the cost of living. Each one remained within what was expected, except when they decided to leave the program and cross accusations, to the exasperation of the four journalists in charge of moderating. “He’s lying once again,” Boric repeated several times each time Kast, with an imperturbable half smile, accused him of having changed his mind on key issues such as raising taxes or the end of the private retirement system. “It’s okay to be nervous,” Kast replied in a monkish tone. “Soon this will be a Kast vs. Kast debate,” the right-winger told him wryly.

Controversial are also the proposals of the far-right candidate, especially on issues related to minority rights. “Kast’s intolerance is a danger to diversity in Chile,” Boric shot. “My daughters’ friends come to my house with their same-sex partners,” Kast replied. The journalists reminded Kast that, years ago, he spoke of “gay dictatorship” to criticize that La Moneda had lit up with LGTB colors. “What is this about the gay dictatorship?” Boric countered. Kast couldn’t answer and went off on a tangent. “If we have a president who talks about a gay dictatorship, imagine what his government would be like,” Boric took advantage of.

The bloc dedicated to the fight against drug trafficking also had scenes outside the rigid scheme of television debate. Kast reminded Boric that he had been asking for months that both of them undergo a test that “proves that neither of them uses drugs.” Boric came prepared. “Here is the drug test, which I took on November 2, 2021. I am not a drug user,” Boric replied. “But raising suspicion is the speech of the extreme right. Kast supporters even invented a false medical record for me. The dirty campaign is not the path that Chileans require, ”he said. “I’m glad that every time he looks more like me,” Kast replied, always ironic.

The spiciest of the debate, however, was at the end, in the block of questions crossed between the candidates. Boric blamed his rival that, according to his reading, he is not a politician prone to agreements. “How can a bigot run a country that requires big deals?” Boric wondered. Kast then produced two letters that he had kept in storage from the beginning. If we talk about intolerance, he said “it is not understood how the Communist Party is one of its main allies.” They “have guided you”, he shot Boric. The second letter was to once again agitate the complaint of harassment facing the candidate of the left. The matter occupied a good part of the discussions of the last week, until finally the victim published in networks a repudiation of the use that the right was making of the case.

“I have never committed abuse or harassment. And what I talked to the person is that if I had macho attitudes I would apologize. There are many things that are said about you and your family and I will not use them. And unlike you, I recognize the error; I don’t hide things, ”Boric told him, referring to the journalistic investigations that link Boric’s family to the Pinochet dictatorship and many of its crimes, such as illegal detentions and torture. “I have not lied,” Kast replied. “A person who only asks for forgiveness when caught can hide many other things,” added the right-wing, and left an indeterminate suspicion floating in the air.

This Monday was the second and last face-to-face of the candidates before the final battle, on Sunday. Both forced to move away from the extremes to seduce the vote of the center, there were no great programmatic definitions, but there were many cheap blows. The latest polls give Boric a small lead over Kast for the tiebreaker, although they leave the definition of the result in the hands of a great mass of undecided.