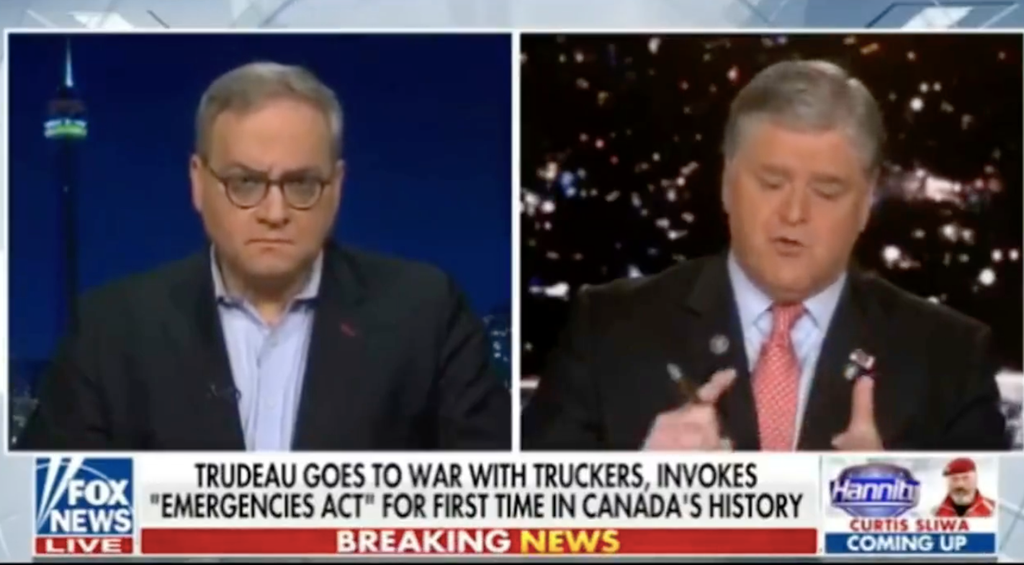 On his Monday show, the host discussed Prime Minister Justin Trudeau invoking the rarely used “Emergencies Act” to tackle the “Freedom Convoy” – which has paralyzed the capital of Ottawa over cross-border vaccine mandates.

“They’re talking about putting these heroes of the pandemic in jail, $100,000 fines, confiscate their rig, take away their licenses, and destroy their livelihoods for what? Five provinces have already got rid of the mandate, and the rest of the world is getting rid of their mandates,” said Mr Hannity.

Many have condemned the host for his comments. “Last night Hannity called the anti-vaxxer truckers spreading Covid the ‘heroes of the pandemic,’”said one Twitter user.

“@seanhannity You don’t know what you’re talking about as usual. 90 per cent of truckers are vaccinated and still doing their jobs. The idiots occupying the Ambassador Bridge are not ‘heroes of the pandemic’, their cause is not freedom. #FluTruxKlanGoHome,” said another.

“The Canadian truckers are heroes according to @TuckerCarlson and @seanhannity. These people are holding up precious goods, but BLM are terrorists? The hypocrisy is insanity like @seanhannity”

On Monday morning, police obtained a warrant to search a number of vehicles in a smaller group aligned with the “Freedom Convoy” protest. The authorities found more than a dozen guns, plus sets of body armor, and other weapons including a machete.

It’s an “example of the militant mindset of a small segment of the protest,” police said in the statement, which announced the arrests of 11 people.

The trucker demonstration started on 29 January, with hundreds of vehicles converging in Ottawa near parliament, followed by a rally, which started about vaccine mandates but evolved into a protest about wider Covid restrictions.

There have been numerous reports of crimes and social disobedience reported during the protests, including engines being run 24 hours a day and horns being tooted day and night, some protesters have reportedly desecrated public property, harassed staff at soup kitchens and set fireworks off. Reports of far-right protesters include people holding swastikas and Confederate flags.

Local businesses and attractions have closed their doors for periods of time during the protest, over safety concerns.

“There is no revolution in the streets of Canada, you’ve seen for yourself it’s a festival environment,” said Mr Hannity’s guest Ezra Levant, a far-right Canadian political commentator. “There’s no violence, it’s happy, moms and dads and kids. Trudeau is claiming they’re dangerous, claiming they’re terrorists,” he continued.

The prime minister’s Emergencies Act can be implemented in the event of an “urgent and critical situation” that “seriously endangers the lives, health or safety of Canadians”. It will give Mr Trudeau the power to prohibit public assembly for 30 days.

Of the 120,000 cross-border Canadian truck drivers, around 85 per cent were already vaccinated by January.

Canada has had more than 3.2 million coronavirus cases since the start of the pandemic and 35,500 people have died from the disease in the North American nation. More than 81 per cent of the population is fully vaccinated, according to John’s Hopkins data.

The Independent has contacted Fox News for further comment.