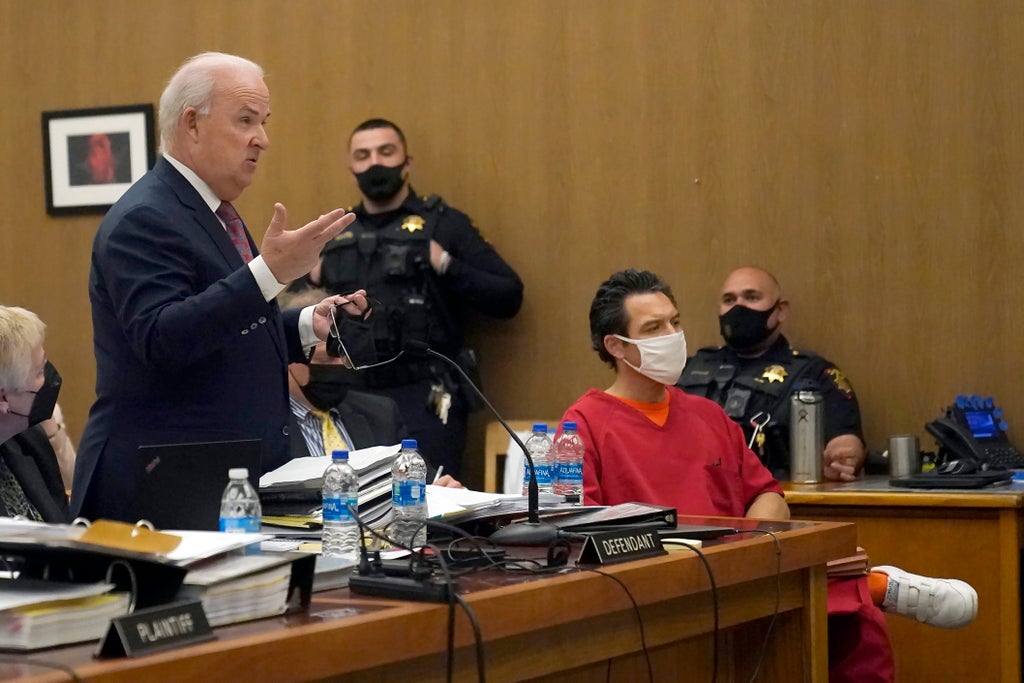 Lawyers trying to overturn Scott Peterson’s conviction in the sordid slaying of his pregnant wife 20 years ago completed their questioning Monday without shaking a former juror from her crucial testimony that she acted properly before and during his 2004 trial.

They must first prove to California Superior Court Judge Anne-Christine Massullo that juror Richelle Nice lied on her pre-trial jury questionnaire to get on the panel that convicted Peterson of murdering Laci Peterson, 27, and the unborn son they were going to name Conner . The judge then would have to find that Nice was biased against Peterson from the start, tainting his jury of her and denying him a fair trial.

But Nice swore in testimony Friday and again Monday that, while she may have answered juror questions improperly, she did so truthfully.

Peterson’s attorneys plan to spend the next two days of the weeklong hearing putting on witnesses they say will contradict Nice’s answers.

“When I filled out that questionnaire, honestly and truly, nothing of this ever crossed my mind, ever,” Nice said Monday of her failure to disclose that she had sought a restraining order in 2000 against her then boyfriend’s former girlfriend, saying then that she feared for her own unborn child.

That, Peterson’s attorneys say, colored her view of their client, accused of killing his wife when she was eight months pregnant and dumping her body into San Francisco Bay on Christmas Eve 2002.

“I didn’t write it on the questionnaire because it never crossed my mind, ever. It wasn’t done intentionally — it didn’t cross my mind,” Nice swore.

She also disputed any financial motive in the case.

Jurors never discussed jointly writing a book until after the trial and verdict — “Absolutely not,” she swore.

She denied selling a series of post-trial letters between herself and Peterson to People Magazine.

Nice said she doesn’t recall a fellow juror’s account that when she joined the jury in deliberations she declared that “We should get Scott for what he did to Laci and ‘little man.’ ”

“It doesn’t sound like something I would say, but I have no idea,” she said. “I don’t remember this.”

She said to her recollection, the first time she used “little man” to refer to Conner was in her first television interview after the trial.

Peterson’s attorneys argue that she lobbied to get on the jury.

But prosecutors on Monday called that into question with a transcript of the jury selection process showing that the trial judge had dismissed Nice from the jury pool because of financial hardship and she was ready to walk out the door without complaint — until Peterson’s celebrity attorney, Mark Geragos, called her back.

It was only then that she said she could afford to serve during what was expected to be a five-month trial despite being paid by her employer for just two weeks.

Nice said she could afford to go without pay because she was living with her mother and boyfriend, who could help financially.

But Peterson attorney Pat Harris said Friday that they can’t find Nice’s then-boyfriend, who he said told a defense investigator that he was concerned at the time about the financial toll and Nice’s need to care for a sick child. Massullo is weighing whether to allow the investigator to testify instead.

Defense attorneys plan to call Geragos to the stand, now contending that his allowing Nice to serve amounted to ineffective assistance of counsel.

Geragos has said in court papers that he had known of Nice’s personal history he would have immediately bounced her from the jury.

Peterson’s attorneys plan to call the witness stand three former fellow jurors; a co-author of “We the Jury,” the book written by Nice and six other jurors; and filmmakers who say Nice had on her wall a photograph of a young child in pajamas with printing on the pajamas that said “Little-man.”

They also plan to question a People magazine reporter who wrote a story based on the 17 letters Nice wrote to Peterson after his conviction and the eight letters Peterson wrote to Nice.