A Scots couple won their dream £20,000 wedding after meeting while working on cancer wards at Glasgow’s Beatson.

Ashleigh Edgar first locked eyes with Derek McCarvel while the pair were working there in January 2016.

Sparks flew between the lovebirds, both from Maryhill, who got together that April and have been inseparable ever since.

Hospital porter Derek entered a competition with GoRadio to win an all-expenses-paid wedding while raising thousands for a charity close to their hearts.

Battling against three other couples to raise the most cash for their chosen charity, Ashleigh, 35, and Derek, 42, organized a bingo night, bucket collections and bungee jump in just two weeks.

Raising over £13,000 for the Beatsons, the sweethearts took home gold and look forward to their lavish wedding do at Citation in Glasgow’s Merchant City in March 2023.

With venue, food, drinks, cars, DJ, decorations and a piper all paid for, the bride and groom-to-be also received money towards their dress and kilt.

Still on cloud nine and “totally overwhelmed” Ashleigh reflected on the “win-win” situation.

The community staff nurse, who shares three children with Derek, told the Record: “I still can’t believe it.

“Citation is our dream wedding venue and now we’re getting married there, all expenses paid, it’s worth around £20,000.

See also  Dyson's new airwrap for 2022 is out now: How to buy the multi-styler and updated attachments

“We knew we’d never be able to afford to have the wedding we wanted until 2025 so it’s amazing we can get married sooner.”

She added: “People’s kindness has been amazing, total strangers donated to our JustGiving page.

“Everybody won out of this; we have our wedding next year, the Beatsons are getting £13,303 and the total amount raised for charities from all four couples was around £48,000 which is amazing.”

Ashleigh took a shining to hospital porter Derek straight away when working together at the Beatsons.

“I’d never met someone so happy all the time, even at work,” she said.

“I really liked him and, on my second placement there, I asked him out and the rest is history.”

Derek’s unconventional proposal saw him get down on one knee while Ashleigh was having a back massage in Glasgow’s west end.

“I was lying face down with a towel wrapped round me, I couldn’t have been more shocked,” she added.

“But it was a lovely surprise, we knew we wanted to get married, I just didn’t know when.

“We have big families so a wedding in somewhere like Citation, financially, was not an option until a couple of years away.

“In February I noticed the GoRadio competition and went for it.”

The pair were shortlisted and scrambled to raise money in the allocated fortnight and, on March 11, gathered with GoRadio presenters, Grado and Gary Muircroft who made the announcement to a shocked and tearful Ashleigh.

After celebrating with a ‘few bottles of Prosecco’ in their local pub, the pair stuck to their word of completing a bungee jump at Killiecrankie Visitor Center near Pitlochry the next morning.

“Derek’s petrified of heights but, to be honest, he might have still been a little under the influence for the bungee jump which might have helped,” Ashleigh added.

“It was terrifying but we had to do it after raising all the money.

“We’ve seen what the Beatson do. They’ve helped my family and friends in the past. Derek’s worked there for 17 years and sees how treatment has progressed. That made it all worthwhile.” 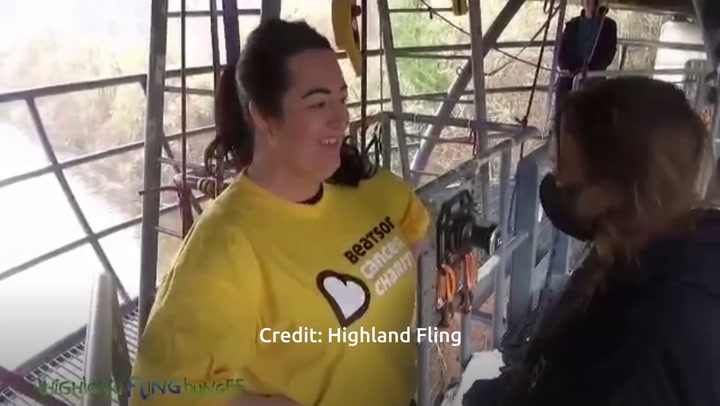 Beatson chiefs are ‘truly thrilled’ for the couple who have ‘such strong connections’ to the charity.

A spokesperson told the Record: “We are truly thrilled for this couple.

“The fact they have strong connections with our charity and hospital makes it even more special.

“This incredible amount of fundraising will go directly towards our service development.

“We are exploring new services to offer patients and their families so this shall be warmly received.

“We are super happy for Ashleigh and Derek who went over and beyond to secure their special day.”

For more information on Beatson Cancer Charity visit their website or call 0141 212 0505.

See also  It Happened in Paris: Portrait of a City Through Their Brightest Minds | Culture | ICON