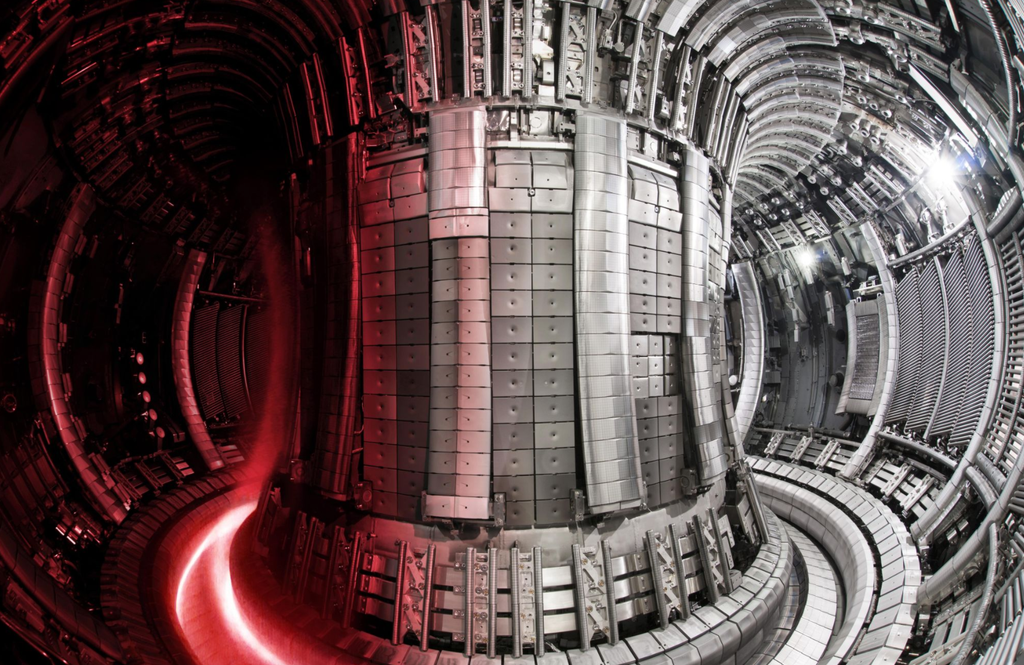 A scientific experiment that mimics the way in which our sun powers itself has set a new record for generating energy, in a breakthrough that raises the prospect of one day developing a near limitless source of power.

The UK-based JET reactor, based in Oxford, produced 59 megajoules of energy during a five-second burst of nuclear fusion, doubling the previous record of 21.7 megajoules set by the facility in 1997.

Fusion, the process that powers the stars, brings together hydrogen atoms at temperatures 10 times hotter the sun, which then bind to release a vast amount of energy and form new elements.

“We’ve demonstrated that we can create a mini star inside of our machine and hold it there for five seconds and get high performance, which really takes us into a new realm,” said Dr Joe Milnes, the head of operations at the reactor lab

In theory, nuclear fusion does not require an abundance of fuels and generates only very small amounts of short-lived radioactive waste. Importantly, it does not produce greenhouse gases.

The breakthrough at JET, run by the UK Atomic Energy Authority (UKAEA), opens the door to one day producing a near limitless and clean source of power that can be used to fuel our homes, cars and cities.

However, harnessing the forces involved in nuclear fusion is a huge challenge and there is still a long to go before this type of energy will be accessible on a practical basis.

Temperatures of more than 100 million Celsius are required to fuse together atomic nuclei and generate the release of energy. No materials on earth can withstand direct exposure to such high levels of heat.

See also  Rebekah Vardy and Coleen Rooney: What is their friendship history?

Because of this, the JET scientists have constructed a doughnut-shaped magnetic field that holds in place the fusion reaction’s “fuel” – the hydrogen atoms deuterium and tritium – which goes on to form a highly ionized cloud of gas called plasma.

Fusion occurs within this white hot river of plasma as it races around the inside of the JET machine, known as a tokamak, before releasing a burst of energy and other elements, such as helium.

In an experiment conducted at JET last autumn, around 59 megajoules, or 11 megawatts of energy were produced – enough to power around 60 kettles’ worth of water – in a five-second burst.

Because of the complex set-up of the JET facility, the experiment consumed more energy to create the fusion reaction than the energy it released.

However, Ian Fells, emeritus professor of energy conversion at the University of Newcastle, described the output as “a landmark in fusion research”, and other scientists have said this type of energy is a power worth striving for to “protect the planet for future generations”.

Indeed, 1kg of fusion fuel contains about 10 million times as much energy as 1kg of coal, oil or gas.

The approach pioneered at the Joint European Torus (JET), located at Culham in Oxfordshire, is the culmination of nearly 40 years’ worth of work, and is being replicated at the International Thermonuclear Experimental Reactor (Iter), a larger and more advanced version of JET.

Iter is a fusion research project supported by seven members – China, the European Union, India, Japan, Korea, Russia and the US – based in the south of France.

Researchers say the recent results from JET support the development of the Iter project, which is aiming to start burning deuterium-tritium fuel in 2035 and generate more energy than it consumes.

JET cannot run any longer than five seconds because its electromagnets get too hot. For Iter internally cooled superconducting magnets will be used.

Dr Mark Wenman, a reader in nuclear materials at Imperial College London, said: “These exciting new results from JET clearly show that it can be achieved in a tokamak similar to the new, larger, more powerful, Iter device.

“For me, this means we can expect big things from Iter and that fusion energy really is no longer just a dream of the far future – the engineering to make it a useful, clean power source is achievable and happening now.”