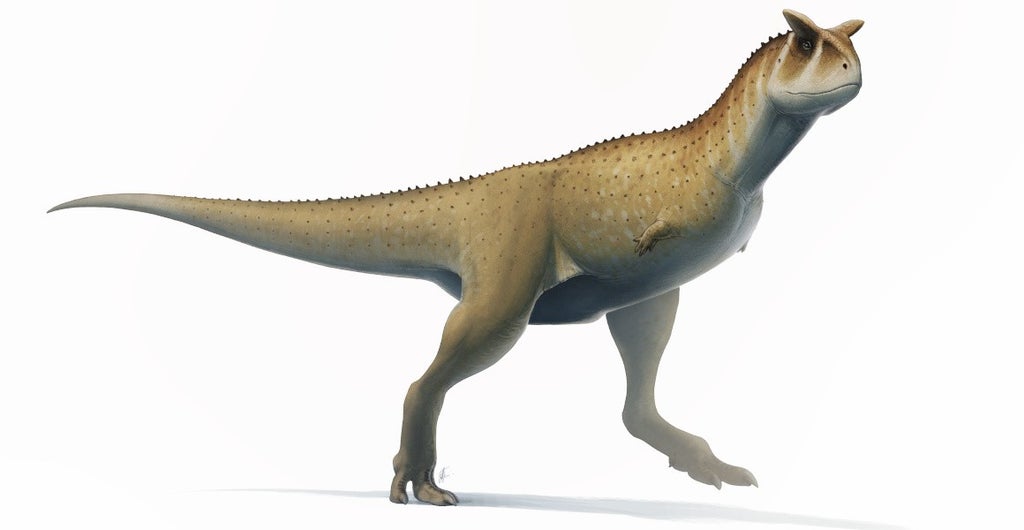 Paleontologists have uncovered the skull of an “unusual” dinosaur that could be the close relative of the ancestors of an armless group of dinosaurs that roamed the Earth’s southern hemisphere about 70 million years ago.

The new species, Gemesia Ochoai, was a species of abelisaurid – a clade of carnivorous dinosaurs that lived in parts of modern-day Africa, South America, and India, according to the study, published earlier this month in the Journal of Vertebrate Paleontology.

The skull fossil may lead to a better understanding of why this area gave rise to such unusual animals, say researchers including those from Universidad Maimónides in Argentina and the Natural History Museum in the UK.

“This new dinosaur is quite unusual for its kind. It has several key characteristics that suggest that it is a new species, providing important new information about an area of ​​the world which we don’t know a lot about,” Anjali Goswami, study leader from the Natural History Museum, said in a statement.

While some preliminary research suggests the mighty tyrannosaurus rex might have actually used its tiny arms to bring prey in close for a bite, paleontologists behind the new study say many species of abelisaurs had front limbs that were even shorter than those of the t.rex, and “effectively useless.”

Abelisaurid hands, they say, could not grasp prey or objects, forcing the dinosaurs to rely on their powerful heads and jaws to capture prey.

Fossils of this clade of dinosaurs have been found in rocks across Africa, South America, Europe as well as India dating to the Late Cretaceous, just before dinosaurs were wiped out 66 million years ago, scientists say.

Paleontologists also found that the G. ochoai‘s braincase was small like those of other abelisaurids, suggesting it had a small brain.

They also identified rows of small holes in the front of the skull known as foramina that could have allowed the dinosaur to cool down, with blood being pumped into the thin skin at the front of the head to release heat.

The fossil reveals the new species had a cranium about 70 per cent smaller than any of its relatives, but also indicating it may be the remains of a juvenile.

Scientists say there is conflicting evidence on this, but add that there are enough unique features of the dinosaur to believe this is a new genus and species near the bottom of the family tree of abelisaurs, or closely related to the ancestors of the rest of the group.

The fossil, scientists say, adds to a growing body of evidence that suggest north-western Argentina had a unique set of creatures unlike those found elsewhere in the world at this time, including the podocnemidoidae turtle Stupendemys geographicusone of the largest aquatic reptiles to have ever lived.

While Argentina is well known for fossils of dinosaurs from this clade, with 35 species already described from the country, researchers say nearly all of these fossils are from Patagonia, in the country’s south, and relatively few have been found in the north-west.

“It shows that the dinosaurs that live in this region were quite different from those in other parts of Argentina, supporting the idea of ​​distinct provinces in the Cretaceous of South America,” Dr Goswami said.

“Understanding huge global events like a mass extinction requires global datasets, but there are lots of parts of the world that have not been studied in detail, and tonnes of fossils remaining to be discovered,” she added.

Researchers say they are now focused to uncover more specimens, particularly from the period just before and after the end-Cretaceous mass extinction that wiped out most dinosaurs to understand how this massive event shaped life on the planet.