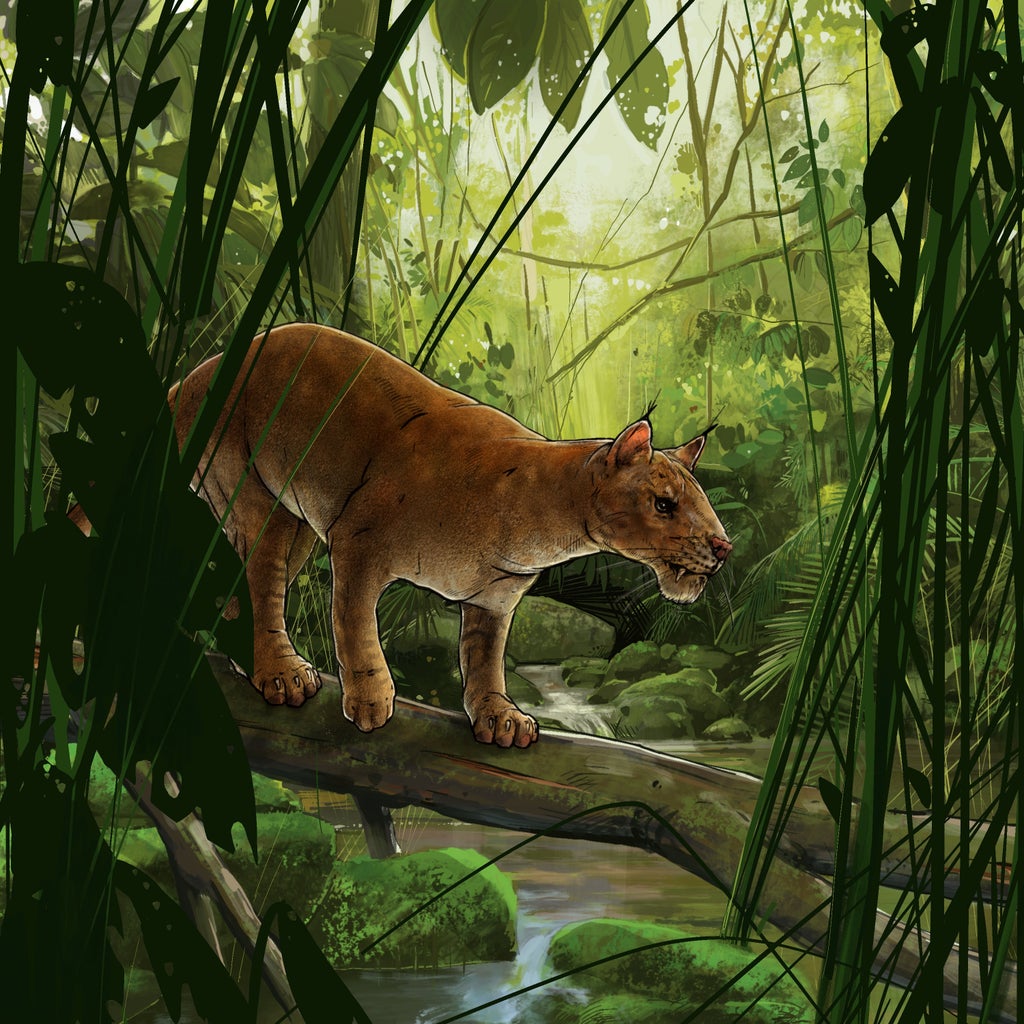 Cats evolved from a fierce saber-toothed predator that prowled North America 42 million years ago, according to new research.

The new species was among the first mammals to have an exclusively meat-based diet.

It was twice as big as an average housecat – and could have taken down rhinoceroses, camels, tapirs, pigs and horses.

“Tigers do it, polar bears can do it. If you have a house cat, you may even have a hypercarnivore at home.

“But 42 million years ago, mammals were only just figuring out how to survive on meat alone.

“One big advance was to evolve specialized teeth for slicing flesh – which is something we see in this newly described specimen.”

Its lower jaw and well-preserved teeth were unearthed at a fossil site in San Diego, southern California, west of the Rocky Mountains.

The powerful killer would have been about the size of a modern bobcat – found across the US.

It’s an ancestor of Smilodon – the most iconic saber-toothed cat – which died out 10,000 years ago.

The animal may have been the first to develop long, curved fangs which protruded from the mouth when closed.

Co-author Dr Shawn Zack, of the University of Arizona, said: “We know so little about Machaeroidines, so every new discovery greatly expands our picture of them.

“This relatively complete, well-preserved fossil is especially useful because the teeth let us infer the diet and start to understand how Machaeroidines are related to each other.”

It opens a window into what the planet was like during the Eocene – when the oldest known members of modern mammals appeared.

Diegoaelurus sheds fresh light on the behavior of the first felines to roam Earth.

It had a downturned bony chin to protect its long upper saber teeth. The adaptation made it a new and particularly efficient kind of hunter.

Explained Dr Poust: “Nothing like this had existed in mammals before. A few mammalian ancestors had long fangs.

“But Diegoaelurus and its few relatives represent the first cat-like approach to an all-meat diet, with saber-teeth in front and slicing scissor teeth called carnassials in the back.

“It’s a potent combination that several animal groups have independently evolved in the millions of years since.”

Diegoaelurus was likened to an “evolutionary experiment” – a primitive stab at a hypercarnivory lifestyle followed by cats today.

The machaeroidines are poorly understood – with only a handful of fossil specimens from Wyoming and Asia.

Dr Zack said: “This fossil finding shows they were more diverse than we thought.”

“We already knew there was a large form, Apataelurus, which lived in eastern Utah.

“Now we have this smaller form, and it lived at approximately the same time. It raises the possibility that there may be more out there to find.”

Smilodon became the apex predator of the Ice Age – weighing almost a ton and reaching more than ten feet long.

It’s popularly known as the saber-toothed tiger – despite not being closely related to modern tigers or cats.

Dr Poust said: “Diegoaleurus, though old, is the most recent of the machaeroidine predators.

“That puts it within striking distance of the time that the next cat-like animals arrived in North America – the nimravids or sabre-tooth false-cats.

“Did these groups ever meet, or even compete for space and prey? We don’t know yet, but San Diego is proving to be a surprisingly important place for carnivore evolution.”

The fossil was dug up at a prehistoric graveyard stumbled upon in the 1980s by a local 12-year-old boy.

Since then, ‘Jeff’s Discovery Site’ has become an important site within a larger group of rocks called the Santiago Formation.

Fossils of an entire ecosystem from the ancient, tropical past have been found.

Dr Poust said: “Not only was San Diego further south due to tectonic plate movements, but the Eocene was a wetter, warmer world.

“The Santiago Formation fossils show us a forested, wet California where tiny rhinos, early tapirs, and strange sheep-like, herbivorous oreodonts grazed under trees while unusual primates and marsupials clung to the canopy above.

“This richness of prey species would have been a smorgasbord for Diegoaelurus – allowing it to live the life of a specialized hunter before most other mammals.”

The jaw of Diegoaelurus, described in the journal PeerJ, has been reconstructed in 3D. It can be viewed for free on the museum’s website.