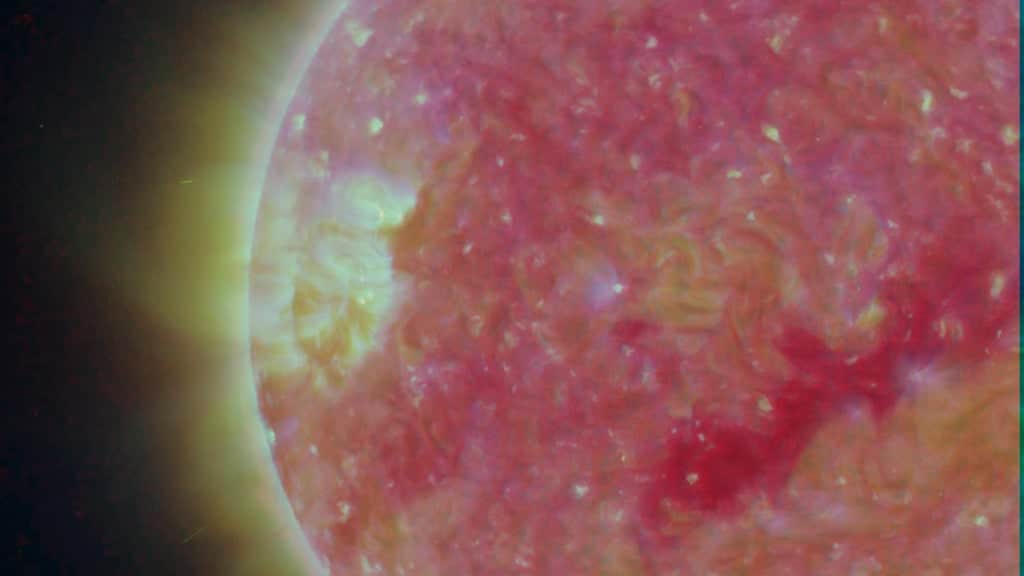 Scientists have developed a new, unified theory of why the Sun is hot – or more specifically, why its upper atmosphere is so hot when it’s furthest from our star’s core.

The new theory could help scientists better understand solar wind, the charged particles streaming from the sun’s upper atmosphere, which can interfere with satellites and transfer energy into Earth’s magnetic field.

In a new paper published Thursday in the journal Nature Astronomy, Scientists at the University of Otago propose a new process to explain why a solar astronomy puzzle: Why is the Sun’s upper atmosphere so much hotter than its surface?

As the outer edge of a massive ball of gas superheated by thermonuclear reactions fusing hydrogen atoms into helium atoms, the surface of the Sun is extremely hot – a blistering 6,000 degrees Celsius.

The Sun’s surface is relatively temperate compared with the Sun’s upper atmosphere, or corona, the wispy tendrils of plasma seen around the edge of the Moon during a total eclipse and ranging from a few hundred kilometers to five million kilometers above the surface. Temperatures in the corona regularly measure more than 1 million degrees Celsius, and scientists believe that the process that generates this intense heat so far from the Sun’s core may govern how powerfully the solar wind flows from the Sun.

“We know from measurements and theory that the sudden temperature jump is related to magnetic fields which thread out of the Sun’s surface,” the lead author of the study, Jonathan Squire, said in a statement. “Astrophysicists have several different ideas about how the magnetic-field energy could be converted into heat to explain the heating, but most have difficulty explaining some aspect of observations.”

Hypotheses involving a form of turbulence known as low-frequency “Alfvénic” turbulence are supported by observations by spacecraft and would explain the transportation of energy outwards from the Sun. But they don’t fit observations that ions — the cores of hydrogen, helium and oxygen atoms stripped of their electrons — become superheated while electrons remain relatively cool in the corona.

A hypothesis involving a sort of magnetic wave known as high-frequency ion-cyclotron waves can explain the differential heating between ions and electrons, but scientists haven’t found a clear source for such waves.

But in the new paper, Dr Squire and his colleagues argue that both turbulent and magnetic waves are two components of a larger, unified process of coronal heating. Through a phenomenon they call the helicity barrier, they theorize that the low-frequency turbulence process diverts electrons’ energy into the creation of ion-cyclotron waves, which then heat the ions.

The researchers then tested the hypothesis using six-dimensional computer simulations and found the magnetic field structures and coronal gas eddies generated hewed close to observations of the actual solar corona made by Nasa’s Parker Solar Probe spacecraft, which first flew through the Sun’s corona in December.

And beyond gaining a better understanding of solar coronal physics for its own sake, said study co-author Dr Romain Meyrand, scientists will better understand and be able to predict space weather events that can affect spacecraft near Earth.

“The solar corona’s dynamics can have profound impacts on Earth,” he said in a statement. “Perhaps, with a better understanding of its basic physics, we will be able to build better models to predict space weather in the future, thus allowing the implementation of protection strategies that could head off — literally — billions of dollars of damage.”