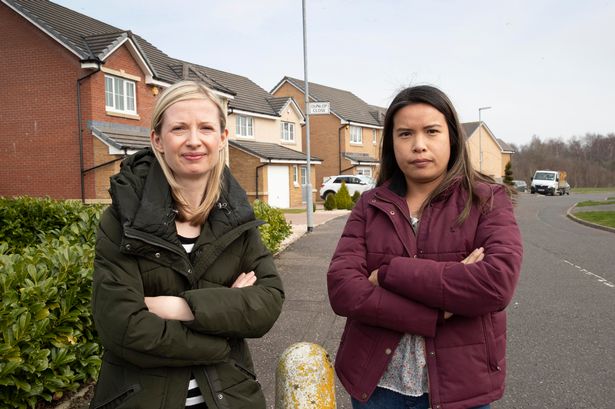 Angry parents have demanded council bosses redraw school catchment areas amid fears children will be separated from friends because of the street they live on.

Classrooms near the boundary of Glasgow and North Lanarkshire councils are bursting at the seams following years of massive housing developments in the suburbs.

But the building boom has caused confusion among locals over who provides which services – with some streets passing between the two local authorities.

Dunlop Close in Cardowan, Stepps, was originally part of Glasgow when it was built in the last decade but was adopted by North Lanarkshire in 2019 following a request from residents.

A group of parents have now lodged an official complaint with council bosses after they discovered their street is still part of the Glasgow school catchment zone.

It means some youngsters attending a local nursery will not be able to go on to Chryston Primary in North Lanarkshire after the summer break – and will instead be expected to travel to Aultmore Park, a 15 minute drive away.

Thipnatee Sansawatt, who lives in Cardowan, had hoped her four-year-old son Maxwell would be able to walk to school when he begins primary in August.

The single mum must now navigate the placement process required when a child wants to attend a school in a different catchment area.

She said: “I am originally from Thailand and the image I had of the education system in Scotland was very positive.

“But I never imagined I would have to go through this kind of pressure and hassle just for my son to go to school.

“I was not aware of the catchment area issue as I thought it was settled when our estate was transferred to North Lanarkshire.

“It was only when I applied for my son to attend Chryston that I was told. I was shocked.”

Another local parent, who asked not to be named, said: “We’ve gone from a mad situation where Glasgow bin lorries had to make a point to come to our area to collect the bins, and roads would never be gritted, because we were the forgotten part of Glasgow to now being the forgotten North Lanarkshire residents who can’t get into schools.

“The council didn’t want us to be their residents but they happily take our council tax payments.”

“The council boundary change is now in place and homes in this development now come under North Lanarkshire Council although their school catchment area remains with nearby primary schools in Glasgow, which have more than sufficient capacity to accommodate all pupils.

“We are working on a plan to provide a long-term solution for schooling for residents living at this development and work has recently started on building a replacement Chryston Primary School building which is expected to complete by Autumn 2023 and respective homes in this development will be reasoned to this school.

“Some residents have applied for placing requests to Stepps Primary School and where there has been availability, these have been granted.

See also  Let's be honest on International Women's Day – we have gone backwards, not forwards

“However, the capacity at Stepps Primary School is under extreme pressure and we are currently unable to accommodate all placing requests.”