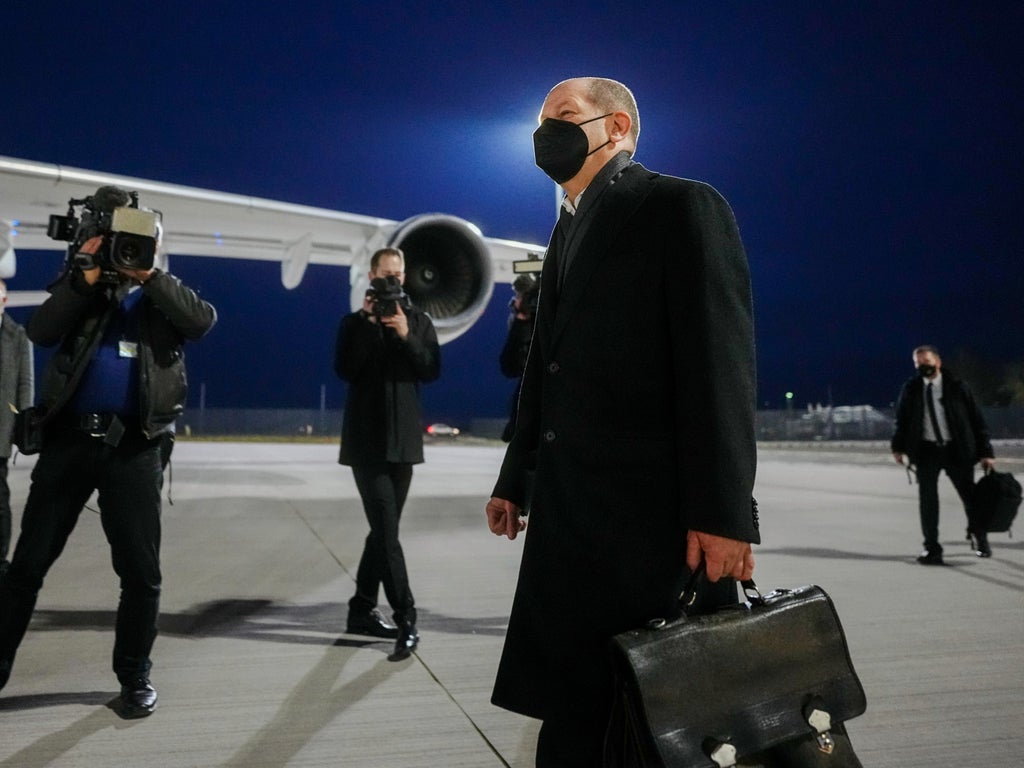 German Chancellor Olaf Scholz will head to Moscow later today to discuss the Ukraine crisis with Russian President Vladimir Putin as the West ramps up diplomatic efforts to try to avert war.

Mr Scholz’s one-day trip, after visiting Kiev on Monday, is part of frantic efforts to stop a potential invasion as about 130,000 Russian troops mass on Ukraine’s borders.

The chancellor is expected to say that the West is open to dialogue about Russia’s security concerns but will warn that tough sanctions will be imposed if it does invade its neighbour.

“We are ready for very far-reaching and effective sanctions in coordination with our allies,” Mr Scholz said in Kiev on Monday.

Mr Scholz’s trip to Moscow follows comments made by British PM Boris Johnson and US President Joe Biden last night, who stressed there remains “a crucial window for diplomacy” and “for Russia to step back from its threats towards Ukraine.”

In a call on Monday evening, the two leaders agreed Western allies should stay “united in the face of Russian threats” and warned of a “significant package of sanctions” should Russia invade Ukraine.

Russia denies it is planning to invade, accusing the West of “hysteria”. However, Moscow has said it could take unspecified “military-technical” action unless a range of demands are met, including barring Kiev from ever joining the Nato alliance.

In fresh developments on Tuesday, some troops in Russia’s military districts adjacent to Ukraine are returning to bases after completing drills, its defense ministry was quoted as saying, a move that could de-escalate frictions between Moscow and the West.

Russia on Monday indicated that it is prepared to keep talking to Western governments to ease tensions, while a Ukrainian official said Kiev was prepared to make “many concessions” to Moscow.

Mr Scholz’s visit to the Kremlin today could prove influential as Germany is Russia’s top trading partner in Europe and also the biggest consumer of its natural gas.

However, Europe’s dependence on gas imports from Russia could mean the German leader has limited room for manoeuvre.

Mr Scholz signaled last month “everything will have to be discussed should there be a military intervention” when asked about the Nord Stream 2 pipeline from Russia to Germany, which is intended to bring more Russian gas to Western Europe, bypassing traditional transit country Ukraine.

But he has not vowed to end Nord Stream 2 or even named it in connection with sanctions, in contrast to Mr Biden who said last Monday the pipeline would be halted if Russia invaded.

Meanwhile, Ukraine President Volodymyr Zelenskiy on Monday called on the country’s people to fly flags and sing the national anthem in unison on 16 February, a date that some analysts and media outlets predict is the day Russian could invade.

Ukrainian government officials stressed that Mr Zelenskiy was not predicting an attack on Wednesday, but responding skeptically to the foreign media reports.

“They tell us Feb. 16 will be the day of the attack. We will make it a day of unity,” Mr Zelenskiy said in a video address to the nation.

“They are trying to frighten us by yet again naming a date for the start of military action,” he added. “On that day, we will hang our national flags, wear yellow and blue banners, and show the whole world our unity.”

The Ukrainian leader has long said that, while he believes Russia is threatening to attack his country, the likelihood of an imminent invasion has been overstated by Western allies, responding to Moscow’s efforts to intimidate Ukraine and sow panic.

Mr Zelenskiy’s office released a decree calling for all villages and towns in Ukraine to fly the country’s flags on Wednesday, and for the entire nation to sing the national anthem at 10 am It also called for an increase in salaries of soldiers and border guards.

US officials said they were not predicting an assault ordered by Mr Putin on a specific day, but warned again that it could happen at any time.

It comes as new commercial satellite images show a flurry of Russian military activity at several locations near Ukraine, according to a private US company that released the pictures.

Maxar Technologies, which has been tracking the buildup of Russian forces for weeks, said on Tuesday that images taken on Sunday and Monday captured significant new activity in Belarus, annexed Crimea and western Russia.

The company pointed to the arrival of several large deployments of troops and attack helicopters as well new deployments of ground attack aircraft and fighter-bomber jets to forward locations.

The images also captured the departure of multiple ground forces units from existing garrisons along with other combat units seen in convoy formation, Maxar said.

The images could not be independently verified by Reuters.