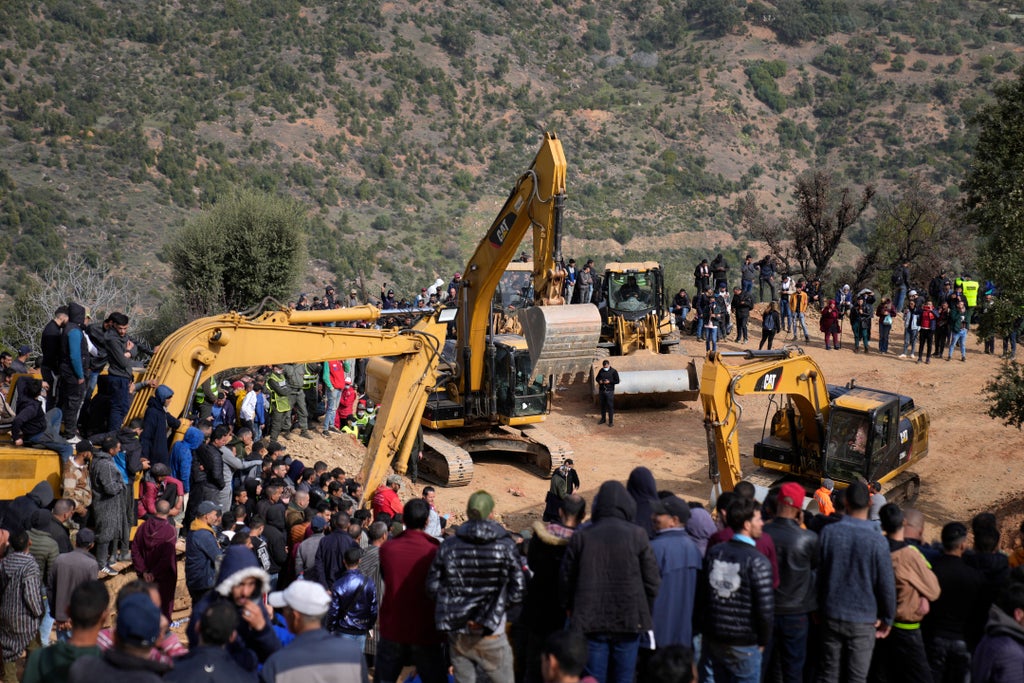 Rescuers have edged close to a five-year-old boy who fell into a 30-meter (100 feet) deep well in northern Morocco.

Perilous work to free the boy, who local media have named as Rayan, was temporarily halted on Friday night amid fears the ground could collapse.

Officials have said there is less than 20ft of earth left to dig through before reaching the boy. Two rescue team members are now using manual drills to penetrate the final stretch of ground separating from the trapped five-year-old.

“This stage is the most important and most complicated one,” one of the rescuers, Abdelhadi Temrani, told New York Times.

“We’re almost there. We’ve been working non-stop for three days and tiredness is kicking in, but the whole rescue team is hanging on,” Abdesalam Makoudi, one of the leaders of the operation, told Al Jazeera.

Rayan was reportedly with his father, who had been repairing the well, when the accident happened in the village of Ighran in Morocco’s northern Chefchaouen province on Tuesday evening. The five-year-old has been trapped between the narrow walls ever since.

Efforts to rescue him have gripped the country and thousands of people have been watching footage of the rescue attempt on social media. A large crowd has also gathered at the rescue site.

Footage from the rescue shows Rayan waiting in a narrow notch of earth and stone, with what appears to be scratches across his face. The boy appears dazed and distraught.

Other images from the search have shown officials using rope to deliver him supplies.

Rayan has even been sent messages of support, including from Manchester City and Algerian footballer Riyad Mahrez, who urged him to “stay strong” in a social media post.

The boy’s family was reportedly at the rescue site, and made a traditional Moroccan couscous to share with neighbors and onlookers who came to lend their support.

“I ask Moroccans to pray for the safe return of my son,” Rayan’s mother told local media outlets.

Search crews first used five bulldozers over days to dig vertically to a depth of more than 31 meters, according to Morocco’s official MAP news agency. On Friday, they started excavating a horizontal tunnel to reach the trapped boy, with experts in topographical engineering called upon for help.

Work was temporarily halted on Friday “out of concern that the ground surrounding the well could collapse,” rescue committee member Abdelhadi Temrani told local television 2M. It has since been summarized and workers said “the boy’s rescue is approaching”.

Rescue operations are being led by Morocco’s civil protection services, who attached a mobile phone to a rope and lowered it to communicate with Rayan and film his surroundings, according to the Middle East Eye. The boy is said to be aware, though he appeared to be suffering from minor head injuries.

Authorities have used bulldozers to dig around the well but are worried about further injuring the five-year-old. Hundreds of locals gathered around the well on Wednesday night and the hashtag #SaveRayan has been trending on Twitter in Morocco. A helicopter stands waiting to carry him to a hospital once he is extracted.

The father of the boy told the le360 site: “It’s my well, I was fixing it. Rayan was next to me, at one point he fell. I did not realize it. Everyone is doing their best so that he comes out alive and that we can take him in our arms by the end of the day. But I won’t hide that his mother and I are very worried.”

Mohamed Yassin El Quahabi, president of the Chefchaouen Association of Caving and Mountain Activities, said the narrowness of the well was impeding rescue efforts. “The problem of this rescue is that the hole diameter is very, very small, about 25cm,” he said. “At the depth of 28 metres, it became smaller so we couldn’t reach him.”

But he added: “The child’s rescue is approaching. Our hearts are with the family, and we are praying that he will be back with them as soon as possible.”

Rescuers have lowered an oxygen mask, food and water into the well. A medical team is also onsite, ready to treat the boy.

On Friday, drilling rigs were used. Rescuers are digging a parallel hole close to the well to try and rescue Rayan.