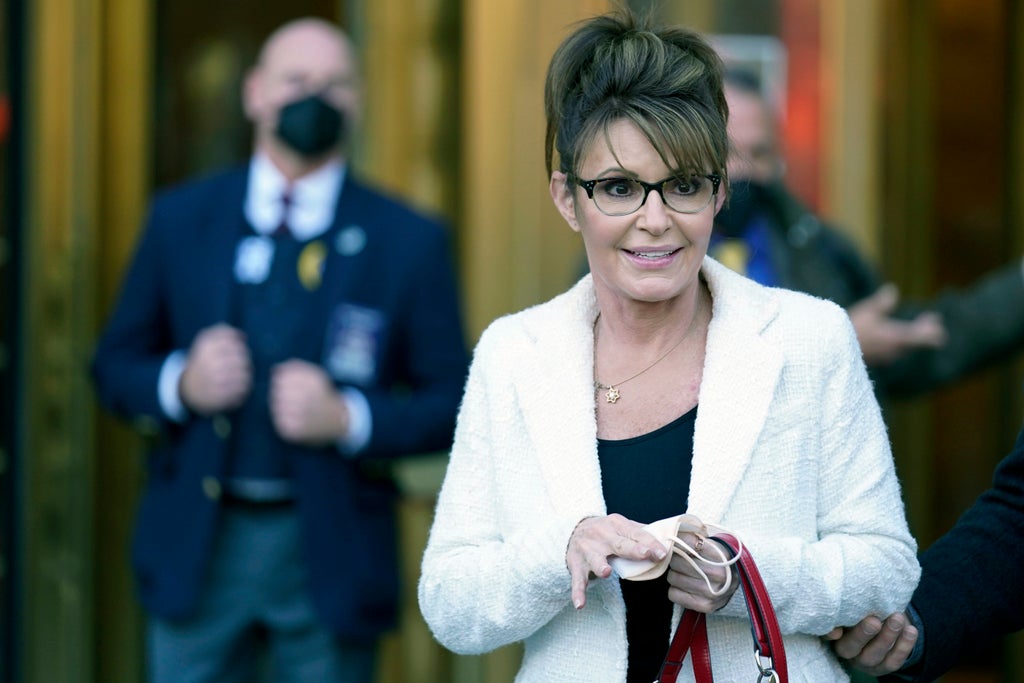 Sarah Palin said she felt “powerless” following an emotionally “devastating” editorial in the New York Times at the center of a high-profile defamation trial to determine whether the newspaper knowingly published false information against her.

The editorial, which was promptly corrected, falsely linked her political action committee’s map, featuring crosshairs over Democratic-leaning congressional districts, to a 2011 shooting in Arizona that killed six people and then injured US Rep Gabby Giffords.

“It was devastating to read, again, an accusation, false accusation, that I had anything to do with murdering innocent people,” she said from the witness stand in US District Court in Manhattan on 10 February.

Closing arguments in the first libel trial against the newspaper in nearly 20 years will begin on Friday in a case that could affirm legal precedents that have provided broad legal protections to journalists and media organizations when writing about public figures.

Before the court wrapped for the day, New York Times attorney David Axelrod requested that case against the newspaper be dismissed, arguing that Ms Palin failed to offer evidence that then-editorial editor James Bennet knowingly published false material or with animus toward her, or was intentionally reckless in doing so.

Judge Rakoff said he will reserve judgment until both parties present their closing arguments on Friday.

Earlier, the judge ruled that he will not allow punitive damages against the Timessaying that no reasonable juror would conclude that Mr Bennet sought to injure Ms Palin.

“The evidence frankly that Mr Bennet harbored ill will toward Ms Palin is quite modest indeed,” he said.

Despite her social media following and appearances on cable television, including highly rated programs on Fox News, Ms Palin said she felt “powerless” and lacked a platform to combat the claims.

She compared herself to David against the newspaper’s Goliath, while she was “up in Wasilla, Alaska, up against those who buy ink by the barrel, and here I was with my No 2 pencil on my kitchen table.”

Attorneys for the newspaper appeared to try to undermine her claims of emotional and professional damage in the face of criticism, following her rhetoric and dozens of media appearances in her years in public office and on the Republican vice presidential ticket in 2008.

She acknowledged heightened media scrutiny and public criticism comes with the territory.

“You become a target, and people take shots,” she said. “I expect a level playing field in that territory, anticipating some shots.”

During cross-examination, Mr Axelrod noted that her response to initial criticism of the map in 2010 was to tell her supporters on social media “Don’t Retreat, Instead – RELOAD!”

She did not point to any specific financial impacts or other specific damages in the wake of the 2017 editorial’s publication, other than stress and losing sleep, and she claimed that requests for endorsements and appearances began to taper off.

The former Alaska governor recognised, however, that “the door is always open” for her return to public office, and she has continued to make appearances on Fox News, at Turning Point USA events, and on reality television series, including The Masked Singer, which he called the “most fun 90 seconds of my life.”

“It paid some bills,” she said.

She also acknowledged that she campaigned for Roy Moore in the Alabama Senate race three months after the editorial was published.

Asked whether any candidates or others have “shied away” from her in the editorial’s wake, she told the court that she “can’t specifically give you any name of someone who told me that they didn’t want me to help them.”

The map from her SarahPAC portrayed stylized crosshairs to mark Democratic-leaning districts as part of a campaign to win Republican seats in those areas.

Ms Palin testified that she received death threats following the creation of the map and previous false attempts in 2011 to connect it to the shooting in Arizona.

An early draft of New York Times editorial in question drew a comparison between a 2017 shooting at a congressional baseball game with the 2011 shooting and noted that SarahPAC created a map with Ms Giffords’ district in crosshairs.

In the course of editing the story, then-editorial editor James Bennet added a sentence saying that “the link to political incitement was clear.”

Ms Palin has alleged that the editorial’s use of the word “incitement” falsely implied a causal link between herself and the shooting.

Mr Bennet testified earlier this week that he added the word “incitement” in the course of rapidly reworking the draft before publication.

He previously explained that his reference to “political incitement” was meant to refer to a heated political environment, a characterization that was ultimately a “mistake,” he told the court on Wednesday.

“I thought it was urgent to correct the piece as forthrightly as possible to acknowledge our mistake,” he said. “This is basic practice. This is the right thing to do.”

Ms Palin’s attorneys must prove the newspaper acted with “actual malice” against her, not merely that the editorial was inaccurate, which the newspaper admitted after publication.

Mr Axelrod also pointed to Ms Palin’s statement in the wake of the 2011 shooting, in which she wrote that “journalists and pundits should not manufacture a blood libel that serves only to incite the very hatred and violence they purport to condemn.”

“I like to think of it more as stir up,” she told the courtroom. “I actually think you can have rhetoric that you would call incitement even if nothing happened afterwards.”

Ms Palin said she did not contact New York Times for a correction following the editorial’s publication before she wrote on Twitter that she was “talking to attorneys” and “exploring options” in response.

“I’m not sure I would reach out to an unfriendly recipient of what they would be receiving,” she told the court.