The head of the Spanish Government, Pedro Sánchez, today accused the Catalan independence movement and the president of the Generalitat, Quim Torra, of resorting to “lies” out of “desperation” because they have no more arguments, and he has warned them that it will be ” firm and forceful “if they break the law.

Sánchez has hardened his speech in his speech in the plenary session of Congress in which he reported on the Executive’s perspectives on the situation in Catalonia and in which he especially regretted that Torra had appealed to the “Slovenian route”.

“Claiming as the Catalan independence movement does the Kosovar way, the Slovenian way, denotes a ignorance of history, an unacceptable manipulation and the despair of those who no longer have any argument other than the lie to support their political positions “.

Sánchez recalled that in 1999 he worked for the UN in Bosnia-Herzegovina and, therefore, knows “well everything” that happened in the former Yugoslavia. “I saw it and I lived it”, has stressed before warning that “the only possible way is the Constitution, the Statute and dialogue.”

“Everything that is outside of this will have the firm, but serene, proportional and forceful response of the social and democratic State of law,” he has guaranteed before considering that it is not necessary to gesture more to make his determination clear.

Throughout his speech, he has established parallels between the independentists and the ‘Brexit’ process (also the reason for his appearance in Congress) and has said that both walk with parallel rhetoric.

Torra demands that Sánchez “politics and not police”

He believes that in both cases “invented and magnified grievances by manipulation”, They try to force the population to make exclusive decisions and blame a third party while ignoring their own responsibilities.

He also believes that both in the ‘Brexit’ and in the actions of the pro-independence activists the “fallacies, false illusions and dialectical traps” with the maxim of “the worse the better”.

Given this, it has reiterated that the central government will not accept that there is such abandonment of functions in relation to the Mossos d’Esquadra and he recalled that after the “unjustifiable inaction” of the political officials in the face of the events of the weekend, letters have been sent to the Government to comply with its obligations or, otherwise, They will mobilize State security forces and bodies. 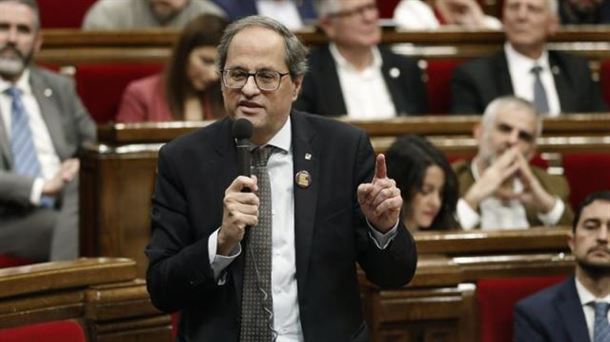 The President of the Generalitat, Quim Torra, in Parliament. Photo: EFE

Sánchez has ratified that, despite the “threats”, there will be a Council of Ministers in Barcelona on December 21.

In the control session in the Parliament, Torra has called this “responsibility”, after the letters sent by the Spanish Government to the Generalitat in which, in his opinion, “an invented story of violence and lack of control” is built in Catalonia, “foolish and irresponsible”, for the sake of “a possible application of 155 in the Mossos or in general “.