The people of Alava this year will celebrate the festivities of San Prudencio (April 28) and Nuestra Señora de Estíbaliz (May 1) from their homes, attending to the confinement measures and from an attitude of respect and tribute to the deceased and affected by the coronavirus, according to the Provincial Council of Álava.

Traditional acts will be replaced by activities framed in confinement, and the Foral Institution has requested that they be disseminated through social networks, within the framework of the initiative #ArabakoJaiakEtxezEtxe.

Starting at 20:45 hours ETB1 and eitb.eus They will broadcast a special program that will offer live images of the city and will remember how the party has been lived in previous years. Radio Vitoria It will also be aware of what happens that night in Vitoria-Gasteiz with a live program.

It is the second time that the San Prudencio drumming is suspended, the first was in the year 1976. In the case of tattoo the cancellation of the same has not been registered in the the last few decades.

The Provincial Government has prepared a series of videos for social networks under the slogan #ArabakoJaiakEtxezEtxe. In these recordings, in addition to the institutional discourse of Ramiro González, General Deputy of Álava, will collaborate a magician from Illusionists Association from Álava, and a Alava cook which will prepare ‘perretxikos’ and snails.

The Provincial Council has also joined the various initiatives of popular drums or alternative schedules that have emerged in recent weeks by social and cultural agents of the territory.

The Gasteiz Batera Popular Care Network, specifically, has summoned the people of Vitoria to celebrate, at the 20:30 hours today, April 27, a popular drumming from their balconies.

This initiative has the support of Leire Betolaza, which before the suspension of the official acts, was appointed Director of the Tamborrada of the San Prudencio festivities.

Flags at half mast

In addition, on April 28, the day of San Prudencio, at the time of the traditional ‘Zortziko’, at 09:00 hours, an institutional act of raising the flag at half-mast will be held in tribute to the victims of the COVID-19 pandemic.

Specifically, the flags of the Provincial Council of Álava and the Vitoria-Gasteiz Town Hall They will fly at half mast during the San Prudencio festival.

An initiative to which the Foral Institution has encouraged to join to all Alava city councils of the province, to whom he has addressed by letter, since the “celebration cannot make us forget the harshness of this situation.”

Ana Del Val, Provincial Deputy for Culture, has announced at a press conference, the work that has been the winner of the poster contest of the patron saint festivities of Álava this year, in which they have participated 44 people.

The winner is Naiara Errasti, who will receive an award of 1.300 euros. The finalist authors of the contest have been Silvia Guillén, Dani Fernández-Ferreiros Urraca, Ibon Sáenz de Olazagoitia and Yolanda Isasi. Each of them will receive 300 euros. 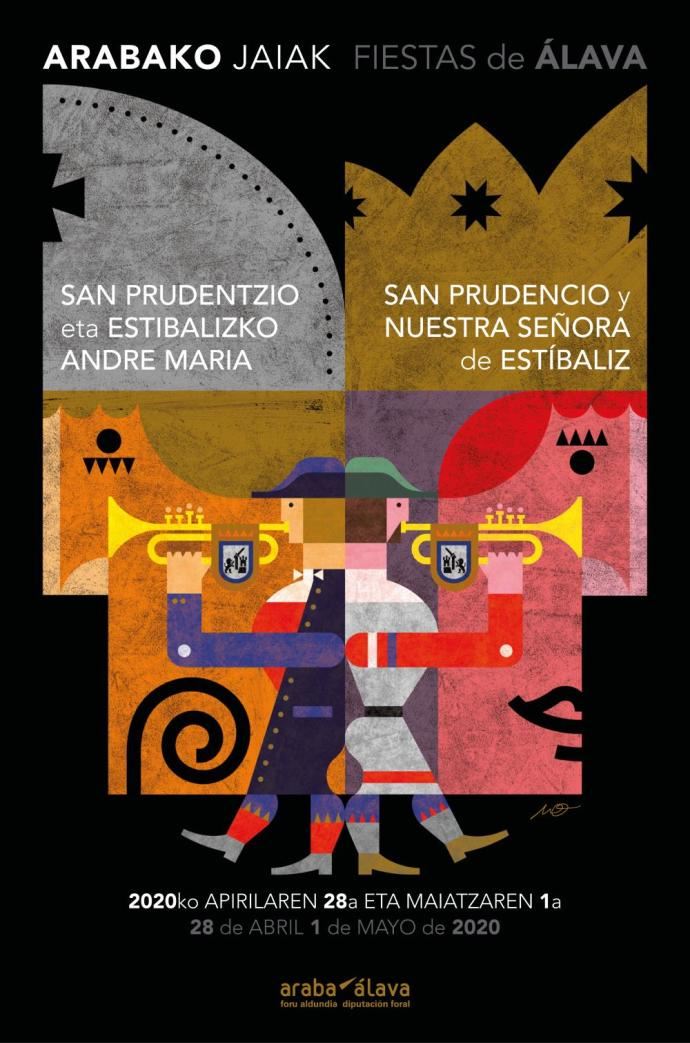 Celebration in the Ayala valley

The City Council of Amurrio is also going to transfer the traditional tambourine in honor of San Prudencio to the balconies and windows.

This initiative is driven by lto Fanfarre Tabarra and the Tamborrada de Amurrio, and will take place today, April 27, the eve of San Prudencio, at 20:05 hours in order to respect, the daily applause of the 8:00 p.m. to the toilets.

For April 28 They have also promoted that the touches of the Retreta reach the inhabitants of the 23 councils that make up the Ayala valley.

For this, the administrative boards on the day of San Prudencio, at 1:00 p.m., they will put the ‘tun-tun’ with the technology they have so that they sones in honor of the patron of the Ayaleses and Ayalesas from the confinement in their homes.

The balcony of the house, scene of the Retreat in Labastida and Lapuebla de Labarca

The Marrate de Labastida Musical Cultural Association They will interpret the touch of Retreta from their windows and balconies.

In the case of Lapuebla de Labarca Assa ikastola has promoted a special afternoon that they have called From balcony to balcony! Initiative in which they encourage the inhabitants of their municipality to go out onto the balcony to interpret the different musical pieces of this day.

They also influence that, as is the custom in school drumming, neighbors wear something red and txapelas or wear cooks clothes.

In both municipalities of the Cuadrilla de Rioja Alavesa make a video with photos and images of that eve of San Prudencio that will remain to be remembered.

Special programs in honor of San Prudencio, tonight at EiTB

Starting at 8:45 p.m. ETB1 and eitb.eus they will broadcast the special program “Remembering St. Prudence”, which will offer live images of the city and will remember how the festival has been lived in previous years. Radio Vitoria will also be watching what happens that night in Vitoria-Gasteiz with a live program.

The special program of Basque television will be driven by Imanol Artola which will be accompanied by Marta Elvira who will perform reporter work. Through the cameras located in different parts of the city, Imanol will make a live chronicle of this great moment, while Marta will interview the neighbors who will go down to the front door of the house to tell how they are living the eve of San Prudencio.

After this thunder of drums, it will be the turn of the toilets, which, as is tradition, can be heard every quarter of an hour, until 22:00 hours, through ETB1, eitb.eus and Radio Vitoria, thanks to the images from last year.

After the show “In discussion”, at 23:00 hours, Imanol Artola and Marta Elvira will resume the live program to remember the best moments of the tambourine of 2019.

They will go back in time to show what the toilet looked like and the tambourine in 1979. They will have the participation of the chef Juanjo Martinez Viñaspre Anemias, which will prepare a hake with perretxikos, and mago Jon Oscoz. They will also offer videos about the confinement sent by the citizens themselves.

See also  The creators of 'Cardo': "The system whistles at all of us, but nothing happens if you think you are nobody" | Cinema in the SER | Present

Starting at midnight we can enjoy a compilation of the shows that have accompanied the retreat for all these years.

Tonight, of 9:00 p.m. to 10:00 p.m., Gema Espinosa and Aratz Goikoetxea will carry out a special program where Radio Vitoria listeners will be able to enjoy all the toilet rooms and the tambourine as if they were in the same Plaza de la Provincia. And between touch and touch Radio Vitoria will offer pieces of the Tamborrada of San Prudencio.

It will be a very special San Prudencio’s Eve, totally different, but for that very reason they have asked their listeners to take the radio out on the balcony and beat the drum (the one that does not have it with plates or pans and the spoon), to celebrate this great party as it deserves.

Among the listeners who send photos and videos from the event to WhatsApp 688605002 will be raffled ten tarts of San Prudencio which will be sent to the winners as soon as circumstances allow.

On Tuesday, 28th of April, Radio Vitoria’s special programming will include the zortziko from the Provincial Council is averaged of the Araba flag in the Plaza de la Provincia in memory of those who died from the pandemic.

Follow the recommendationss in the face of coronavirus from the health authorities. In the face of fake news, pay attention only to official sources. If you live in the CAV and have symptoms, call your usual health center. Also the Health Council will assist people on the phone 900 20 30 50, offering information and solving doubts about the coronavirus. If you live in Navarra, call the Health Council telephone number: 948 290 290. Remember, the most effective way to prevent the spread of COVID-19 is hand washing. Masks are recommended if you have symptoms or have contact with the elderly or immunosuppressed, as well as on public transport, although their use is not mandatory.