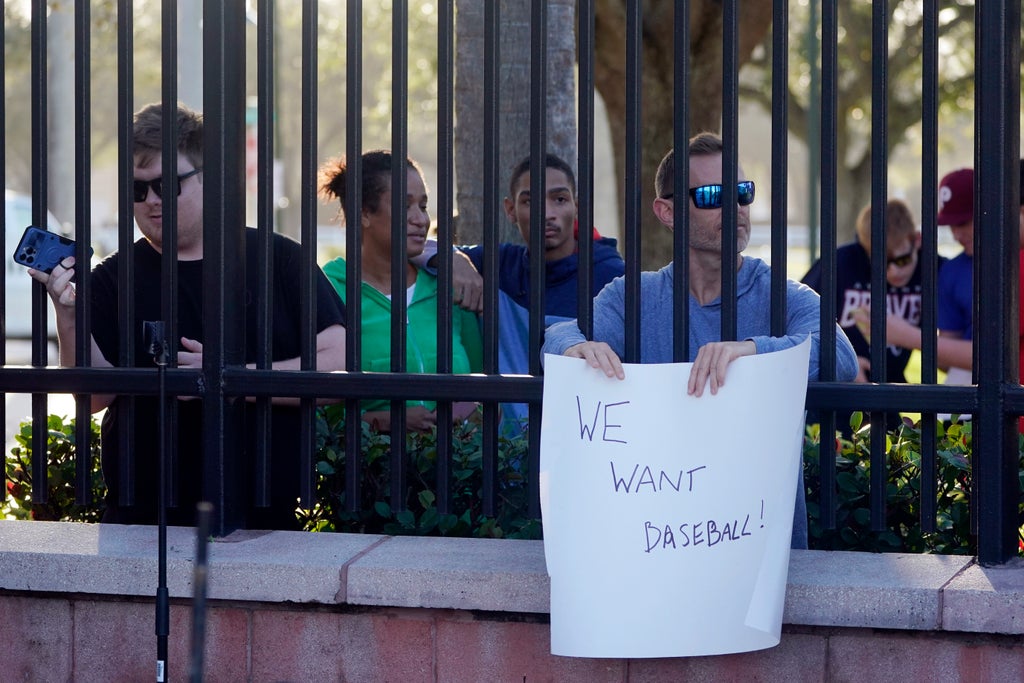 Nathan Rueckert’s personal finances are loosely tied to Major League Baseball, thanks to the 20 years or so he has spent building his company that produces hand-crafted artwork catered to fans.

That’s not why Tuesday was a very bad day.

At heart, Rueckert simply loves baseball. And like most baseball fans, he reacted with a mix of resignation, dismay, sadness and anger when MLB Commissioner Rob Manfred announced that opening day on March 31 was canceled because the players’ union and management couldn’t strike a labor deal in time to end a 90-day lockout.

“I just think of all the father-son moments that are going to be missed,” said Rueckert, who operates Baseball Seams Co. from his home in South Dakota. “All those opportunities that are robbed by a season that might not even exist. Especially with the state of the country and the world, baseball is such a great distraction.

“People want to go to the ballpark, have a hot dog and get rid of stress.”

For fans, MLB’s decision to cancel games only adds to their stress. Andanger. Or, maybe most concerning — apathy.

It’s the latest setback for a sport that’s had arguably the worst luck of the biggest US sports leagues — which include the NFL, NBA, NHL and MLB — when it comes to COVID-19. The pandemic started in mid-March of 2020, immediately shutting down spring training less than three weeks before opening day and causing the season to be shortened by more than 100 games.

No other league lost a bigger chunk of its schedule.

There wasn’t much that could be done about a pandemic. Labor squabbles about how to allocate money in a $10 billion industry are a different story. Now, for the second time in three seasons, at least some regular-season games won’t be played.

There are no heroes in this lockout tale, but much of the social media vitriol has been directed at Manfred, who has been commissioner since 2015. He was spotted practicing his golf swing between bargaining sessions by an Associated Press photographer on Tuesday. Others were upset that Manfred was laughing and jovial with reporters at his news conference announcing the cancellation.

It’s safe to say baseball fans are not amused.

“The people need the games after getting through COVID-19 to lift our spirits and get back to normal,” said Toronto Blue Jays fan Bill Farina, who lives in Palm Harbor, Florida, and was watching a Senators-Lightning NHL game. “I am disappointed in baseball. They don’t care about the fans, and fans are going to leave them behind.

“Why would they stay and support these guys just to get burned?”

St. Louis Cardinals fan Hunter Kniffin is among many who wonder if the game can survive a lengthy work stoppage. He was a teenager during the 1994-95 strike that wiped out a World Series and about 70 regular-season games for each team.

He remembers the fan apathy that followed and the way the sport was eventually energized by the Mark McGwire-Sammy Sosa home run race that captivated the country in 1998. He’s not sure baseball will be as fortunate this time. It’s a different world than the mid-to-late 1990s and there are more options for entertainment than ever.

“It could be a lot harder to bounce back this time,” said Kniffin, who goes to about 10 games each year. “I just don’t see how baseball can afford to lose any more exposure to the other major sports.”

Pittsburgh Pirates fan Anthony Margiotta has two sons who play youth baseball. He’s a diehard who said the lockout wo n’t affect his plans to attend games when and if they’re played, especially if there’s good weather on a summer night.

But he also knows many fans aren’t like him. If baseball’s out of sight, it’s out of mind, and it’s certainly not attracting any younger fans when games are canceled.

The scariest part for MLB could be that many fans seemed resigned to baseball’s popularity fade. Joe Hart was wearing a Detroit Tigers hat on Tuesday night but watching another sport, taking in a Pistons-Wizards NBA game in Washington.

He said the decision to cancel baseball’s opening day is “not a surprise” and blames the owners slightly more than the players for the current fiasco.

But more than the desire to place blame, there’s simply disgust. Being a baseball fan isn’t easy these days.

“People struggling and having a hard time, and they’re trying to figure out how to divide billions of dollars,” Hart said. “It is what it is.”

AP Baseball Writers Ronald Blum and Noah Trister along with AP Sports Writers Fred Goodall and Will Graves contributed to this story.