Skip to content
Home News Saba Kumaritashvili: The luge star enters the Olympics 12 years after her cousin was killed in an accident in 2010 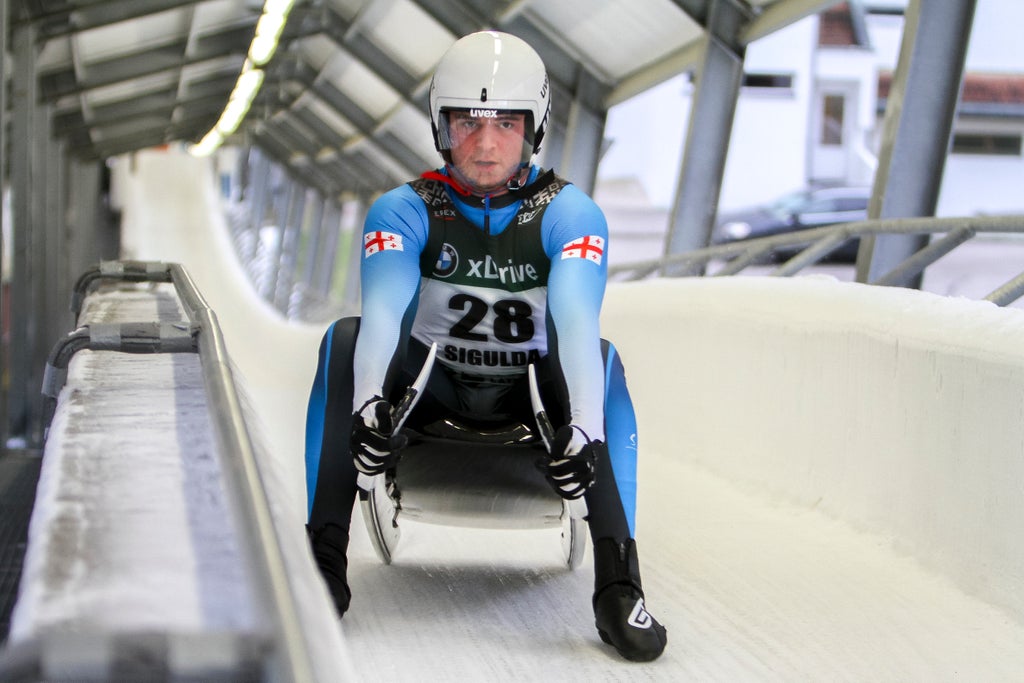 When Saba Kumaritashvili steps onto the ice in Beijing, her cousin’s presence will no doubt play a big role in the race.

The 21-year-old is set to make his Olympic debut in the luge almost exactly 12 years to the day that 21-year-old Nodar Kumaritashvili was killed in a horrific accident during his own Olympic debut.

Nodar was participating in a training run on February 12, 2010, just hours before the Opening Ceremony of the Winter Olympics began in Vancouver.

He was traveling around 90 mph down the Whistler Sliding Center track when he lost control of his sled at the 16th and final turn.

Nodar was thrown from the sled feetfirst and went flying over the ice wall, where he crashed head-on into an exposed metal pole.

A coroner later ruled that he died instantly on impact.

Nodar’s bobsled continued to the finish line, stopping the clock as he crossed.

Now, more than a decade later, Saba hopes to finish the career his cousin started and take home a medal for his home country of Georgia at the 2022 Beijing Winter Olympics.

Saba said in a recent interview with the Associated Press that he can feel Nodar’s “force” with him as he heads to the Games.

“Thinking about him is painful, but it also gives me strength,” she said.

“Each generation of our family had at least one luge athlete, and now my father and I continue this tradition and follow in Nodar’s footsteps.”

The 21-year-old got into the sport at a young age and made his competitive debut last year at the 2021 Nations Cup in Sigulda.

According to his biography page on the Beijing 2022 website, Saba is ranked 47th in the World Cup standings.

It seems there was never any doubt that Saba would persevere in the sport even in the face of unspeakable tragedy.

Saba and Nodar come from a long line of lugers.

It was Aleko Kumaritashvili, Saba’s great-grandfather, who introduced the sport to the country of Georgia in the 1970s and built its first toboggan run in the Bakuriani family’s hometown in 1973.

“My great-grandfather laid the foundation for this sport” and became its national coach, Saba said. access point.

The passion for the luge continued from generation to generation.

At one point, Felix was a coach for the French national luge team before becoming president of the Georgia national luge federation and its national coach, according to an online obituary.

Felix coached many luge athletes during his career, including Nodar at the time of his fatal accident.

Saba’s father is now president of the national federation following Felix’s death in 2020.

Despite his multigenerational success in the sport, it was not until 2010 that Nodar became the first in his family to participate in the Olympics.

After his cousin’s dreams were cut short in training, Saba will now become the first to compete for a medal.

Even after Nodar’s death, the family was determined not to hang up the sleds.

In an interview in 2014, four years after his son’s death, his father David spoke of his plans for his 18-month-old grandson Nikayo to “continue our luging dynasty.”

“At three o’clock we will start training him,” he said at the time.

Erin Hamlin, the first singles slider to win an Olympic medal in luge for Team USA, told Tthe independent he is not surprised to see Nodar’s cousin carrying on the family tradition even in light of his death.

“I don’t think it’s surprising,” he said. “The family has a lot of connection with the sport.”

It was Ms. Hamlin’s second Olympics in Vancouver when the luge community was rocked by Nodar’s horrific accident.

His death made him the first athlete to die in Olympic training or competition in nearly half a century after luger Kazimierz Kay-Skrzypecki was killed in an accident during practice at the 1964 Games.

Ms Hamlin said “there was a lot of shock” over Nodar’s death, but says it never crossed her mind to withdraw from the competition.

“Obviously it shook us all. You never want to see something like that happen,” she said.

“But I never had the mentality of not competing. I felt comfortable on the track.”

The same mentality seems to be true for Saba.

Ms Hamlin added: “There are risks every time you slide. I was never afraid to keep sliding.

“The track was definitely fast and challenging, but it was new and most new tracks are difficult to discover and come with risks. I quite enjoyed the track.”

Questions arose instantly after Nodar’s death about the safety of the track.

The Whistler track was the fastest track in Olympic history and speeds of 96 miles per hour were recorded before the Games.

Turn 16 where Nodar had gone off the track had earned him the nickname “Thunderbird”.

David revealed that his son had told him just three days before his death that he was “very scared” by the turn in which he fell off the sled.

“Dad, I’m really scared of this place on the track,” he reminded ABC News.

David said he urged him not to “take a chance” but his son insisted he was going to.

“What will be, will be,” he recalled him saying.

It was Nodar’s fifth and final training run before he had competed in the Games the following day when the tragedy occurred.

The track was hastily altered after the accident in time for the first race less than 24 hours later.

The start was lowered in an effort to slow down.

The exposed metal studs that Nodar hit were covered with a 12-foot-high wall made of wood and padding.

And the Thunderbird was reconfigured so the sleds wouldn’t slide too high up the walls.

International Luge Federation officials said at the time that the changes were made with the athletes’ “emotional component” in mind and insisted there were no “deficiencies on the track”.

Instead, they said the crash was caused by mistakes made by Nodar when he “failed to compensate properly to enter Turn 16 correctly”.

Ms. Hamlin was expected to take home at least bronze, but ended up missing out on the medal table. She won bronze four years later in Sochi.

She said the independent that Nodar’s death led to changes in the sport in terms of focusing on safety over speed.

“I think it was a movement where everyone stopped to look at ways that we could try to see if it was possible to make the track safer,” he said.

“There wasn’t much you could do other than move the exits as it was kind of a freak accident.

“But the trend of just building faster and faster tracks did change.”

For Saba, he feels that he is now ready to represent his family, particularly his cousin, in Beijing.

“I worked hard and believed strongly in myself,” he said.

“Now I feel happy and satisfied to have achieved one of my goals… I believe that the goal and dream of every athlete is to compete in the Olympic Games, so two years ago I decided to achieve this goal. So here I am.”

He added: “I am happy and proud to have the opportunity to represent my family and my country in these Olympic Games.

“Now I feel responsibility towards them, because they expect good results from me. It’s a great motivation, so I’ll try to do my best for them.”