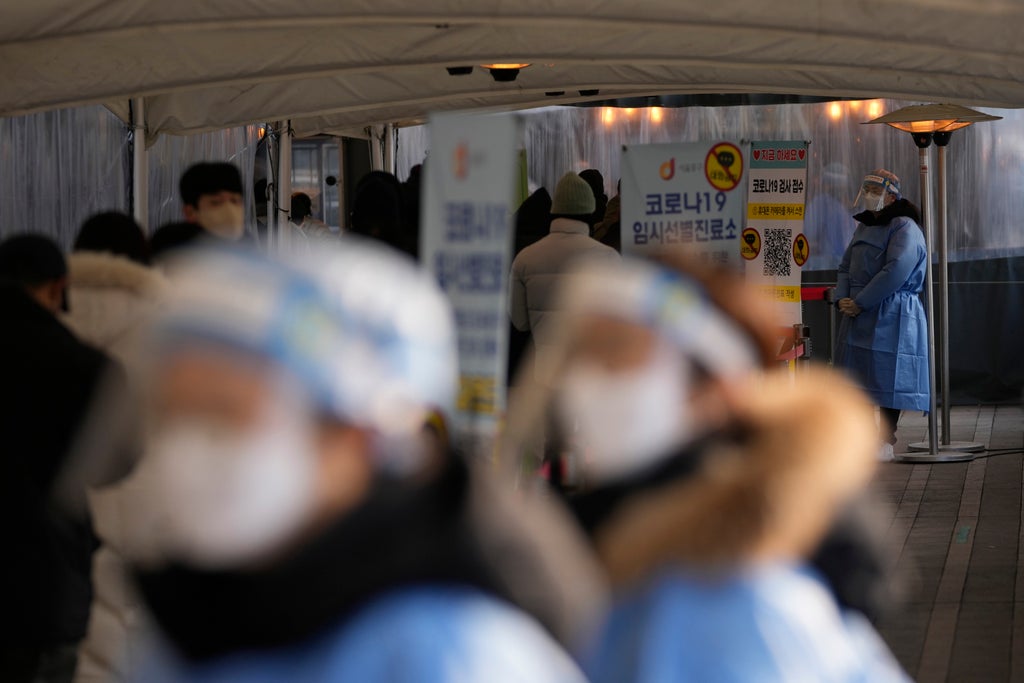 The 13,012 new cases were 4,400 more than the previous single-day high of 8,571 set on Tuesday. It underscores the speed of transmissions driven by the highly contagious omicron variant, which became the country’s dominant strain just last week.

South Korean officials say their early analysis suggests omicron spreads more than twice as fast as the delta variant, which spiked the country’s hospitalizations and fatalities during a devastating winter surge, but is also significantly less likely to cause serious illness or death.

South Korea also has a high vaccination rate. More than 85% of South Korea’s more than 51 million people have been fully vaccinated and more than 50% of the population have received booster shots.

Still, there are concerns that a sudden explosion in infections could possibly overwhelm hospitals and cause disruption at workplaces and essential services by constantly placing huge numbers of people under quarantine.

Starting Wednesday, the quarantine period for virus carriers who tested positive after being fully vaccinated was reduced from 10 days to seven days. Fully vaccinated people who come in close contact with virus carriers will no longer be quarantined, but they will be required to report their daily health conditions to health officials before being tested within six or seven days.

Officials also plan to treat most mild cases at home and reshape a testing regimen that had been centered around PCR tests, which will now be saved mostly for people in their 60s and older or those with pre-existing medical conditions. Most people will be asked to first use rapid test kits available at public health offices, testing stations and pharmacies and receive PCR when those tests are positive.

The new testing policy was enforced at three cities near capital Seoul and the southern South Jeolla Province on Wednesday, and officials plan to expand the changes nationwide in early February.

Despite the benefits of faster results, officials had previously been reluctant to depend on rapid testing as they are known to be less accurate than PCR tests, which require large numbers of health professionals administering nasal and throat swabs and high-tech laboratory machines analyzing samples.

Son Youngrae, a senior Health Ministry official, said it’s inevitable that the country narrows its focus toward reducing serious illnesses and deaths among high-risk groups. I have acknowledged the new approach may result in “disadvantages in the diagnosis and infection prevention of low-risk groups.”

“Our current goal is to manage the spread of the virus at a certain level, so that it doesn’t explode and create an excessively huge peak, and minimize serious cases and fatalities,” Son said during a briefing. “We want to avoid the experience of foreign countries, where hospital systems collapsed or overwhelmed and led to damages in the treatment of non-COVID-19 patients.”