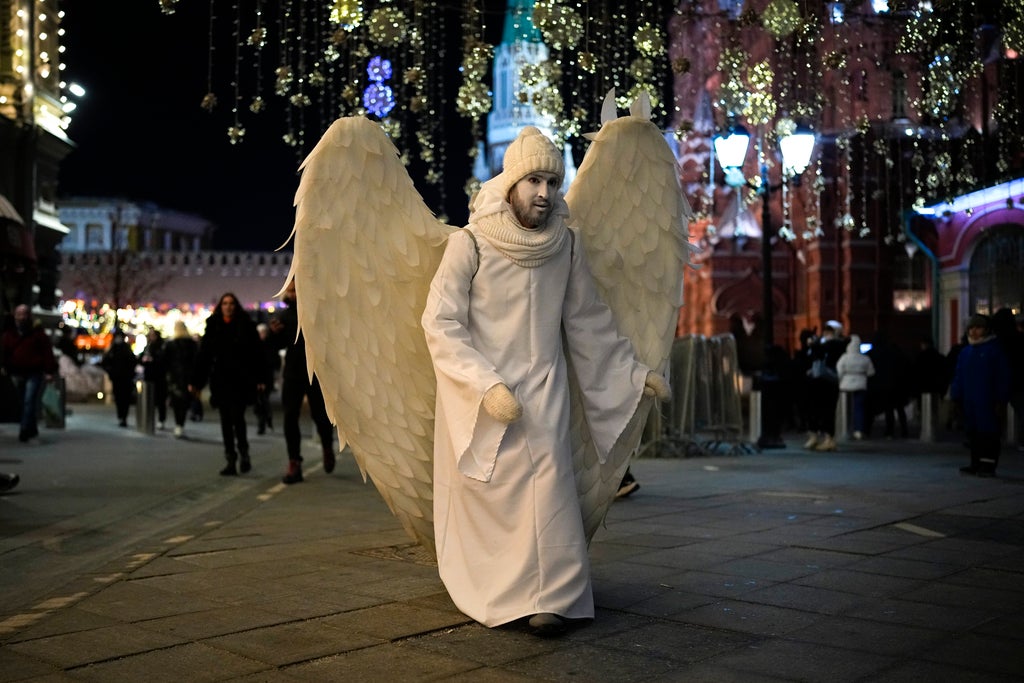 While the US warns that Russia could invade Ukraine any day, the drumbeat of war is all but unheard in Moscow, where pundits and ordinary people alike don’t expect President Vladimir Putin to launch an attack on his ex-Soviet neighbor.

The Kremlin has cast the US warnings of an imminent attack as “hysteria” and “absurdity,” and many Russians believe that Washington is deliberately stoking panic and fomenting tensions to trigger a conflict for domestic reasons.

Putin’s angry rhetoric about NATO’s plans to expand to Russia’s “doorstep” and its refusal to hear Moscow’s concerns has struck a chord with the public, tapping into a sense of betrayal by the West after the end of the Cold War and widespread suspicion about Western designs .

Speaking to reporters after President Joe Biden’s call with Putin on Saturday, Kremlin foreign affairs adviser Yuri Ushakov bemoaned what he described as US “hysteria” about an allegedly imminent invasion, saying that the situation has “reached the point of absurdity.”

The US says that Russia has concentrated over 130,000 troops east, north and south of Ukraine and has the necessary firepower to launch an attack at any moment.

Russian officials have angrily denied any plans to attack Ukraine and dismissed Western concerns about the buildup near the country, arguing that Moscow is free to deploy its troops wherever it likes on its national territory.

“We don’t understand why they are spreading clearly false information about Russian intentions,” Ushakov said about the US warnings of an imminent attack.

In 2014, Russia annexed Ukraine’s Crimean Peninsula following the ouster of the country’s Moscow-friendly president and threw its weight behind a separatist insurgency in Ukraine’s eastern industrial heartland, Donbas, where more than 14,000 people have been killed in fighting.

Russian Foreign Ministry spokeswoman Maria Zakharova has taken a more combative tone, denouncing Washington’s warnings of an imminent Russian attack on Ukraine as “war propaganda” by the US and some of its allies.

Zakharova alleged that the US “needs a war at any price,” charging that “provocations, disinformation and threats represent its favorite methods of solving its own problems.”

She denounced US intelligence claims about an alleged “false flag” operation mounted by Russia to create a pretext for invading Ukraine, comparing them to then US Secretary of State Colin Powell’s 2003 speech before the UN Security Council, in which he made the case for war against Iraq, citing faulty intelligence information claiming Saddam Hussein had secretly stashed weapons of mass destruction.

“The US politicians lied, are lying and will keep lying,” Zakharova said.

Such rhetoric has been amplified by state television, where hosts have alleged nefarious US designs, accusing Washington and its allies of planning phony operations of their own to encourage hawkish forces in Ukraine to launch an offensive to reclaim areas controlled by Russia-backed separatists in the country’s east.

Opinion surveys indicate that the majority of Russians share such views.

More than half of respondents in recent polls conducted by the Levada Center, the top independent opinion firm, consider the US responsible for the current standoff over Ukraine, about 15% blame it on Ukraine and only 3%-4% believe it’s Russia’s fault, While others were undecided, its director Denis Volkov said in comments broadcast earlier this month. Levada’s nationwide polls of about 1,600 people have a margin of error not exceeding 3.4 percentage points.

“Most people see the conflict as a Russia-US conflict,” Volkov said, adding that respondents in focus group interviews said that the US could push Ukraine into attacking the rebels in the east to draw Russia into the fighting.

Asked if she fears a war, Moscow resident Anaida Gevorgyan dismissed it as Western “propaganda.”

“Russia will never do it,” she said. “We are brotherly people, and we have lived together for so many years.”

Russian political analysts are broadly dismissive of US war warnings, pointing out that Russia’s invasion of Ukraine would carry a massive price without offering Putin any clear wins.

“For Moscow, risks of an invasion of Ukraine outweigh any possible gains,” Moscow-based security analyst Sergei Poletayev said in a commentary.

Unlike Crimea, which Russia seized from Ukraine in 2014 without firing a shot, and the conflict in Donbas, where Moscow has denied playing a military role despite Ukrainian and Western claims to the contrary, a full-fledged invasion is certain to become a political and economic disaster for Russia.

While the Kremlin appears bent on pulling Ukraine back into Moscow’s orbit, a massive offensive will inevitably involve huge casualties, undermining Russia’s global standing, leading to its international isolation and shattering Putin’s posture as a leader who cares about ordinary Ukrainians and sees the two people as one.

“It’s impossible to imagine a war with Ukraine,” Moscow resident Vitaly Ladygin said. “We all have relatives there, we have always lived together. I love Ukraine and dream about going there once it all ends.”

An attack on Ukraine would be certain to trigger draconian Western sanctions that would further cripple Russia’s stagnant economy, dent people’s incomes and erode Putin’s support. And while the Russian military could be expected to route the much weaker Ukrainian army, it will inevitably face massive resistance later, resulting in a protracted conflict that would drain Moscow’s scarce resources.

Sergei Karaganov, a Russian foreign policy analyst with close ties to Kremlin thinking, said in recently published comments that while “it’s necessary to stop NATO’s further expansion and militarization of Ukraine … we definitely don’t have plans to conquer Ukraine.”

Many Russian observers predict that instead of launching an invasion, Putin could try to keep pressure on the West with more troop deployments and drills to keep Ukraine out of NATO.

“Having failed to score a full diplomatic result or dare to use force, Russia could turn its army presence near Ukraine into a constant or regularly renewed source of threat that will incur a damage to Ukraine that Western assistance wouldn’t be able to compensate, Alexander Baunov of the Carnegie Moscow Center said in an analysis. “It will also keep the West under strain, and in the end Ukraine and the West could show a greater flexibility.”

Kirill Zarubin contributed to this report.