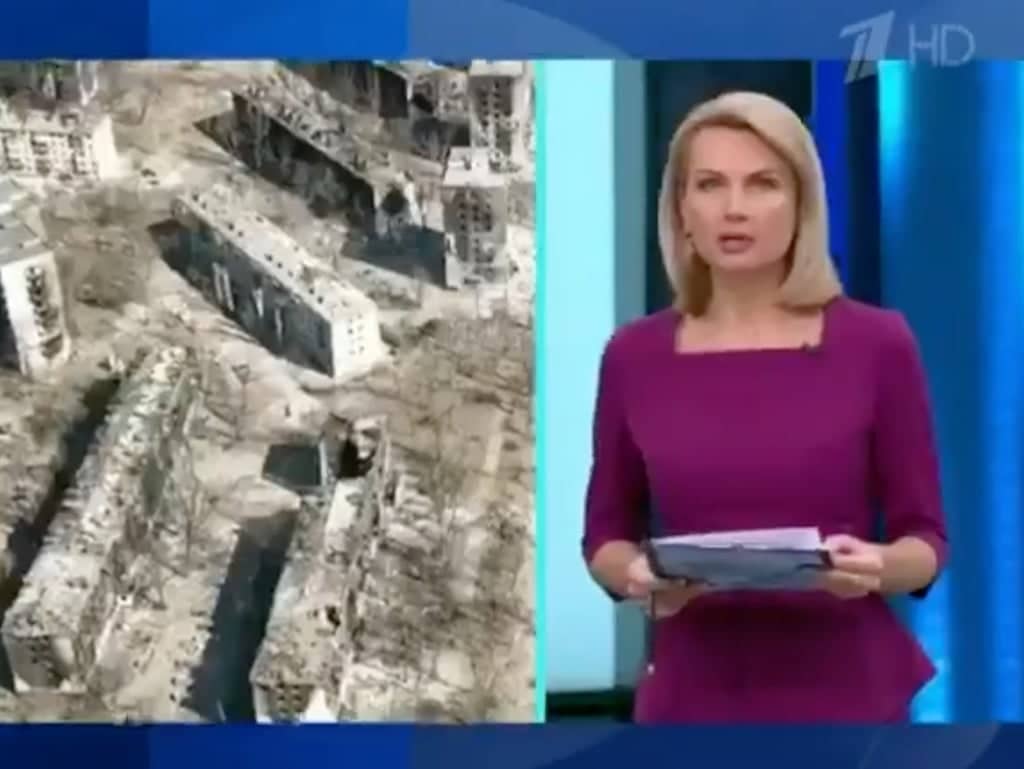 Russian state TV has broadcast aerial footage showing the devastation wrought on the besieged city of Mariupol by Moscow’s invading forces – with the anchor appearing to blame Ukrainian nationalists for the destruction.

Subjected to relentless bombardment since Vladimir Putin’s invasion began a month ago, Mariupol has become the grim face of Ukraine’s humanitarian crisis following multiple failed attempts to evacuate civilians, with Major Vadym Boichenko warning last week that there was “no city center left”.

While the Kremlin has tightened Russian citizens’ access to information about Mr Putin’s “special military operation”, which it has painted as a bid to liberate the Ukrainian people, state broadcaster Channel One appeared to show footage of the extent of the destruction in Mariupol on Wednesday.

In a clip shared to Twitter by Washington Post journalist Mary Ilyushina, the anchor can be heard saying: “Sad scenes, of course… the [Ukrainian] nationalists withdraw trying not to leave a stone unturned”.

But the assessment does echo Mr Putin’s false pretext of “denazifying” Ukraine with his invasion – with the Russian president seeking to equate a well-documented problem with far-right militias in Ukraine with the country’s democratically elected leadership, in order to justify his war .

In a further nod to this claim, Russia’s defense ministry said on Friday that its forces were “fighting against nationalists” in Mariupol city centre. Days earlier, Moscow baselessly accused Ukraine’s infamous Azov Battalion of blowing up a theater housing hundreds of civilians, which was hit by an airstrike.

See also  Ozark Was Scrapped As A Breaking Bad Contender, But Now It's Better Than The Original

While the Azov Battalion, which has links to the far-right and is reported to have recruited neo-Nazis, does appear to have been active in defending Mariupol, Moscow seems to have drawn a scant distinction between those defending the city and the civilians trapped there .

The claim that the damage in Mariupol has been caused by Ukrainians themselves has not just been uttered on Russian state TV in recent days, but by one of Moscow’s top diplomats in the United States, who sought to claim footage of potential Russian war crimes in the port city were “fake news”.

Shown images of apartment buildings ablaze in Mariupol, taken by Associated Press photojournalists, Moscow’s deputy ambassador to the United Nations asked Sky News on Thursday: “How do you know it is Russian missiles?

“It can easily come from Ukraine in the center of the city. It happened in Kharkiv, in Mariupol, because they have their own missile launchers and a lot of cases that I know are reported from Ukrainian missiles themselves.”

Challenged that his claim was “preposterous”, Dmitry Polyanskiy continued: “I think it’s quite logical, it’s not preposterous.”

The European Union’s top diplomat Josep Borrell alleged this week that the attacks on Mariupol constitute “a massive war crime”, with Russian forces “destroying everything, bombarding and killing everybody”.

And during a visit to Bulgaria on Tuesday, Poland’s president Andrzej Duda compared Russia’s attacks on Ukraine to those of the Nazis during the Second World War.

“My countrymen, Poles, are looking today at Mariupol and are saying, ‘God’ — they say it with tears in their eyes — ‘Mariupol looks like Warsaw did in 1944 when Nazis, Hitler’s Germans, were brutally bombing houses, killing people, killing civilians with no mercy at all’,” Mr Duda said.

Ukraine’s foreign ministry claimed on Thursday that Russia has forcibly deported some 6,000 Mariupol residents to its territory and is now holding them hostage in camps, accusing Moscow of moving “to the next level of terror”.

Marina Ovsyannikova, the Russian journalist who made global headlines by bursting onto the state TV channel to protest Mr Putin’s war and tell viewers “they are lying to you”, said in an interview this week that her “colleagues are scared”.

“The heads of Channel One forbade them to discuss this incident,” Ms Ovsyannikova told VOA. “Several colleagues quit, the rest continue to work. They need to feed their families, they cannot find other work in such a difficult time.”

“Because of western sanctions, people have become real hostages of the difficult economic situation in Russia,” she added.