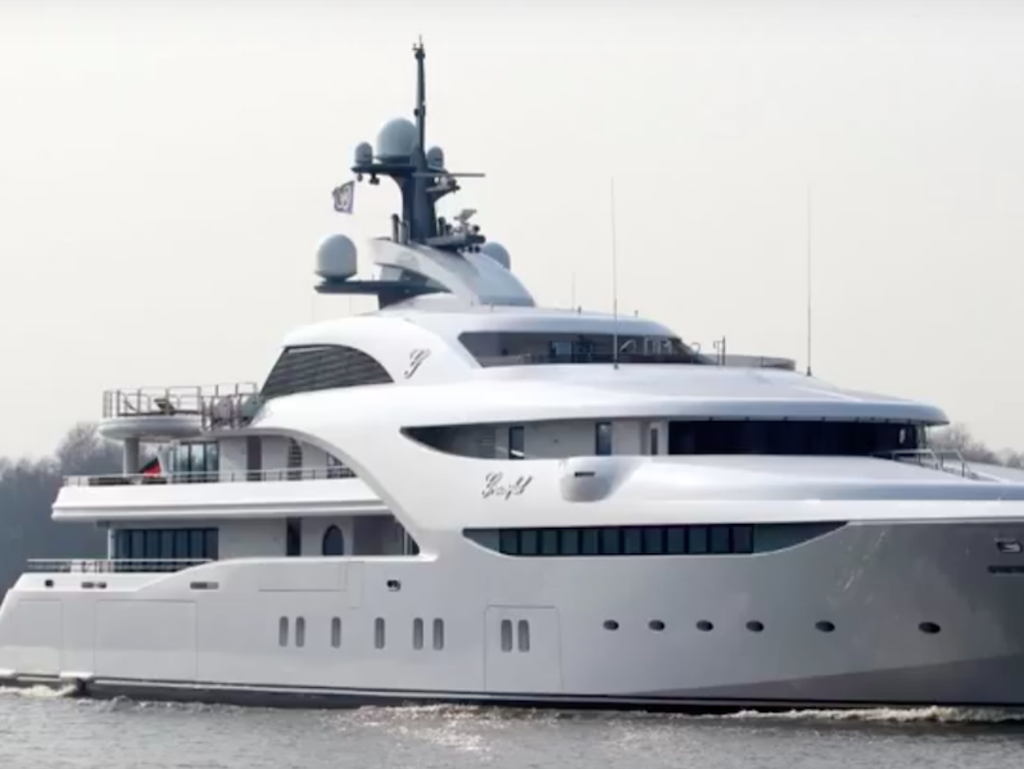 As the invasion of Ukraine continues to inspire international condemnation, mega-yachts linked to Vladimir Putin, his oligarch allies, and other prominent Russian businessmen have embarked on journeys towards waters where they’re out of reach of US and EU jurisdiction.

The trips come as nations like the UK say they’re considering sanctioning or seizing a “hit list” of these floating symbols of the Russian elite as punishment for the ongoing invasion of Ukraine.

Earlier this month, a $100m yacht allegedly belonging to Russian president Vladimir Putin, Gracefulabruptly departed Germany in the middle of a repair job for Kaliningrad, an detached portion of Russian territory on the Baltic Sea between Lithuania and Poland.

The monster vessel, which has its own swimming pool insidewas targeted by hacking group Anonymous, who changed its maritime callsign to “FCKPTN.”

Four other yachts tied to Russian elites have journeyed towards neutral waters in recent days as well, according to a CNBC analysis of maritime data.

Galactic Supre Nova, the yacht of Vagit Alekperov, the billionaire head of Russian oil giant Lukoil, was clocked sailing towards Montenegro, a country with no extradition treaty to the US.

Meanwhile, Russian industrialist Oleg Deripaska’s Clio was spotted sailing towards the Maldives, which similarly doesn’t extradite to the US.

Mr Deripaska, who was sanctioned by the US in 2018 for his ties to the Russian energy sector, has called for an end to the war in Ukraine.

“Peace is the priority. Negotiations must start ASAP,” he tweeted on Sunday.

Neither man has been explicitly targeted under the US sanctions package in response to the Ukraine invasion, and neither has been accused of wrongdoing or direct ties to the conflict beyond their proximity to Vladimir Putin. The Independent has reached out to representatives of Mr Deripaska and Mr Alekperov for comment.

Pressure is building in Washington and across Europe to go after Russian mega-yachts belonging to those in Mr Putin’s inner circle who have been enriched because of their ties to the Russian state.

The White House said on sunday it plans to “launch a multilateral transatlantic task force to identify, hunt down, and freeze the assets of sanctioned Russian companies and oligarchs – their yachts, their mansions, and any ill-gotten gains that we can find and freeze under the law.”

Such actions would build on an already unprecedented bevy of financial penalties against Russia from the US and others.

US officials have directly sanctioned Mr Putin and other top Russian officials, and the White House and EU nations have expelled some Russian banks from SWIFT, a key communications network banks use to send money to each other.

Alaska congressman Don Young announced on Monday he plans to introduce legislation called the Bringing Oligarch Accountability Through Seizure Act (BOATS), that would allow US authorities to seize Russian mega-yachts and auction them off to fund humanitarian aid.

“Our solidarity with Ukraine must be backed with urgent action against rich Russian oligarchs who continue living lavish lifestyles on mega-yachts,” Mr Young said in a statement.

Similar strategies have been discussed internationally.

UK Foreign Secretary Liz Truss said Britain is drawing up a “hit list” of oligarch property for potential sanction, and the EU has already closed European airspace to all Russian aircraft, including private jets.

Meanwhile, French Economy Minister Bruno Le Maire said on Monday, “At the request of the president, we are continuing a full survey of the financial assets, real estate, yachts and luxury vehicles (in France) which belong to Russian personalities targeted by European sanctions.”

Whether such efforts would make a dent in the Ukraine invasion is another story.

Sanctions would make it much harder for these craft to get resupply services like crew and fuel.

“In effect, the yacht wouldn’t be able to function,” Stacy Keen, a sanctions expert at the law firm Pinsent Masons, told Guardian.

However, many Russian oligarchs own their yachts through shell corporations domiciled outside of the country, making their true Russian origin far more opaque to officials.

In 2018, 60 per cent of the wealth of Russia’s richest households was held offshorehigher than any other country in the world.

Crystal Palace vs Manchester United prediction and odds: Back Reds to extend their fine run at Selhurst Park