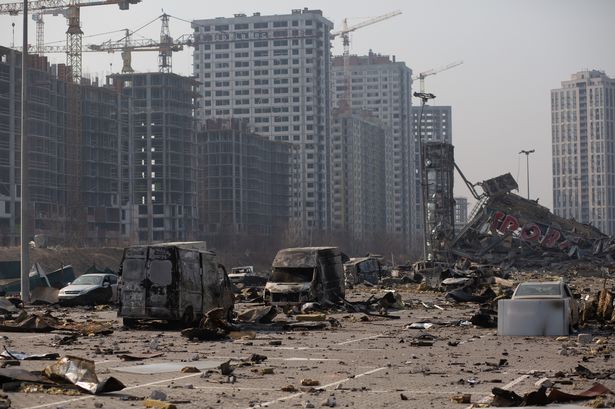 A Russian army chief has claimed that the first phase of the country’s invasion of Ukraine is “complete” – but also signaled that the aims of the invasion may be scaling back.

The country’s defense ministry said on Friday it has “liberated” 93 per cent of the territory of the self-proclaimed Luhansk People’s Republic, and 54 per cent of the Donetsk region – the two areas that jointly make up the Donbass.

Sergey Rudskoy, head of the main operational department of the General Staff of the Russian Armed Forces, did not rule out storming Ukrainian cities that had been blocked in a statement on Friday.

He added that Russia would react immediately to any attempt to close the airspace over Ukraine – something Kyiv has asked NATO to do, but NATO has resisted.

The defense ministry said on Friday that the operation would continue until Russian forces had completed the tasks that had been set, without elaborating.

On Friday, the Russian army updated its losses in Ukraine to 1,351 soldiers, while saying that it had evacuated more than 400,000 civilians.

Since Russia invaded Ukraine last month, thousands have died in shelling and missile attacks, while millions more have fled the country.

Last week, a theater in Mariupol, where hundreds including children had been sheltering, was hit by a deadly airstrike, killing what is believed to be at least 300 people.

Despite the bombardment, the Ministry of Defense said on Friday morning that Ukrainian forces are driving back the Russians from around Kyiv.

The latest assessment said the Ukrainians were expected to continue to try to push the Russians away from the capital.

Defiant Ukrainian troops continue to fight against the Russians
(

“Ukrainian counter-attacks, and Russian forces falling back on overextended supply lines, has allowed Ukraine to reoccupy towns and defensive positions up to 35 kilometers (22 miles) east of Kyiv,” it said.

In the south of the country, it said the Russian advance on the key Black Sea port city of Odesa was being slowed down by “logistic issues and Ukrainian resistance”.

Since the invasion began over a month ago, it was reported that the Kremlin initially thought they could achieve a ‘lightning invasion’ that would see them sweep the city, and Ukrainian capital, in a matter of days.

However, instead of deposing Volodymyr Zelensky’s government, Moscow now finds itself negotiating with it.

In the latest intelligence update, posted on Twitter, the MoD highlighted specific Russian failings – a common theme of this invasion.

The Russian troops had overextended their supply lines it said, which left it vulnerable.

This has reportedly been an issue previously as Russia expected fighting to last days, and was unprepared for the prolonged conflict it now finds itself in.

From here, the MoD said it was likely that Ukraine’s troops would continue to push onwards, including towards the strategically significant Hosomel Airfield – where there was fierce fighting at the beginning of the invasion.

The MoD said: “Ukrainian counter-attacks, and Russian forces falling back on overextended supply lines, has allowed Ukraine to reoccupy towns and defensive positions up to 35 kilometers (21 miles) east of Kyiv.

“Ukrainian forces are likely to continue to attempt to push Russian forces back along the north-western axis from Kyiv towards Hostomel Airfield.”

However, in the south of the country, Mykolaiv is still under heavy Russian siege and Moscow’s troops continue their efforts to surround the city.

Ukrainian forces are driving back the Russians from around Kyiv
(

The MoD added: “In the south of Ukraine, Russian forces are still attempting to circumvent Mykolaiv as they look to drive west towards Odessa, with their progress being slowed by logistic issues and Ukrainian resistance.”

Russia sent tens of thousands of troops into Ukraine on February 24 in what it called a “special operation” to weaken its southern neighbour’s military capabilities and root out people it called dangerous nationalists.

Ukrainian forces have mounted stiff resistance to the invasion and the West has imposed sweeping sanctions on Russia in an effort to force it to withdraw its forces.

Only last night, Kyiv counter-attacks saw success targeting a landing ship and ammunition depots in the southern city of Berdyansk.

This was a part of a reported shift in tactics from Ukraine to target Russian supply chains and leave their frontline troops under-resourced.

Speaking in Russia on Friday, Vladimir Putin said the West has already canceled JK Rowling and is trying to cancel Russia.

The Russian president cited the Harry Potter author as an example of what happens in the West, adding that it likes to cancel people and compared that with canceling Russia.

Putin said Ms Rowling was canceled “just because she didn’t satisfy the demands of gender rights.”

He said: “They are now trying to cancel our country. I’m talking about the progressive discrimination of everything to do with Russia.”

On Friday, the Russian army confirmed 1,351 soldiers had died in conflict in Ukraine, while 3,825 soldiers had been wounded.

A senior defense ministry official, Mikhail Mizintsev, said more than 400,000 civilians had been evacuated to Russia from the separatist eastern Donetsk and Lugansk regions, as well as the rest of Ukraine.

Ukrainian President Volodymyr Zelensky has previously said that Ukraine had lost 14,000 troops while 16,000 were wounded.