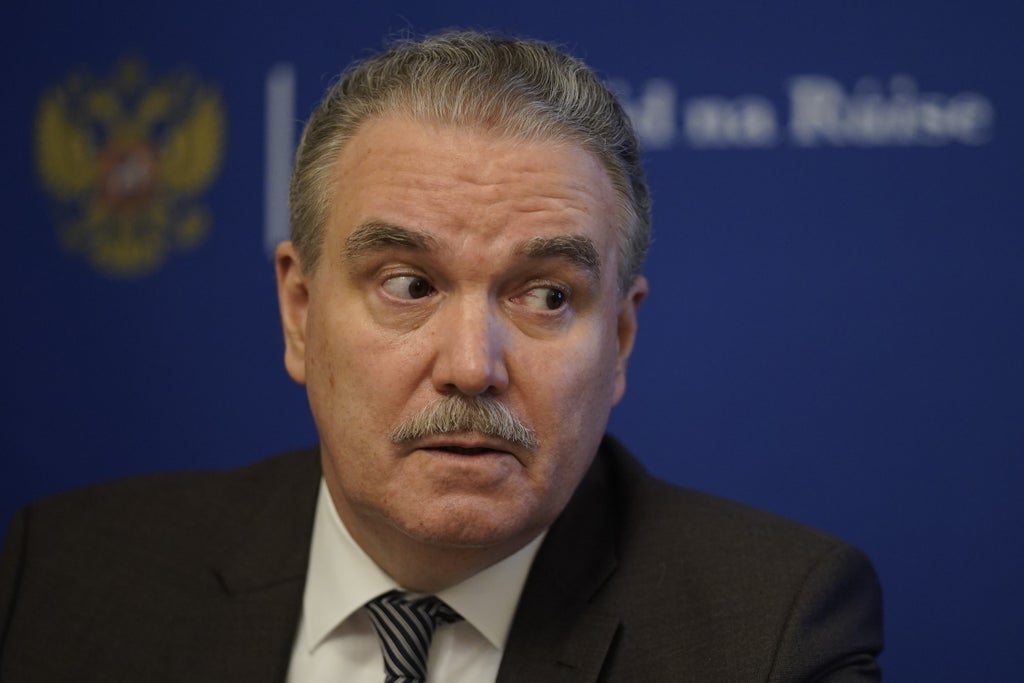 The Russian Ambassador to Ireland has said that the idea his country will invade Ukraine is “insane”.

His comments come as Russian President Vladimir Putin on Tuesday said Moscow was ready for talks with the US and Nato on limits for missile deployments and military transparency.

It came after Russia announced it was pulling back some troops from exercises that have raised fears of a potential invasion of Ukraine.

Russian Ambassador Yury Filatov on Tuesday rejected the suggestion that any invasion was or had been imminent.

He said: “We don’t have any political, military, economic or whatever other reason to do that. The whole idea is insane.”

In an interview with RTE’s Prime Time programme, I indicated that Russian forces plan to withdraw from the Ukrainian border.

He added: “I certainly cannot give you any figures because I don’t have those figures. What I can tell our viewers is within maybe 3-4 weeks, the configuration of the forces in the western region of Russia will summarize its normal standard posture.

He was also asked if troops could return to the border in the future.

“If there is a necessity to conduct exercises, they will. And nobody will teach us what to do or not to do on our own territory, let’s not forget that,” he said.

The ambassador would not be drawn on how many troops would be withdrawn.

He said: “They will go exactly where they need to go. They are going in the Russian territory.

“This is nobody’s business at all.”

He described recent international concern over tensions at the Ukrainian border as “a case of collective insanity”.

He said: “Which in fact is made up of the, I would say, deliberate attempt by the US and the allies to inflate tensions anew.

“These exercises are carried out almost yearly, and they involve moving the whole infrastructure, including hospitals, anti-aircraft, whatever they need to do.”

Earlier, Irish citizens in Ukraine were told that they should still leave the country, despite hopes of an easing of tensions in the region.

Simon Coveney said that Irish Government advice had not changed, even if recent reports from Moscow were “welcome”.

“While recent reports of a move towards de-escalation on the ground – if confirmed – are welcome, it is urgent that Russia de-escalate, abide by international law and engage constructively in dialogue,” he said in a statement on Tuesday evening.

“My department’s advice in respect of Ukraine remains not to travel. I encourage any Irish citizen in Ukraine who has not already done so to register with the Embassy.

UK Prime Minister Boris Johnson said on Tuesday that there are “mixed signals” coming out of Russia about the prospect of an invasion of Ukraine but said that an “avenue for diplomacy” remains open.

The Irish Department of Foreign Affairs said that it is in contact with 114 Irish citizens who have registered with the embassy in Kyiv.

In a statement, it said: “The department is also in close contact with families who have surrogacy arrangements in Ukraine, and is continuing to provide support and assistance to them on an individual basis.

“Any citizen who requires emergency consular assistance can contact the Department of Foreign Affairs at 01-4082000.”

Earlier, the Ukrainian ambassador to Ireland Larysa Gerasko urged Ireland and other allies to maintain “continued pressure” on Russia during an appearance at an Oireachtas committee.