Skip to content
Home News Russia-Ukraine news live: US and UK could sanction Putin over invasion 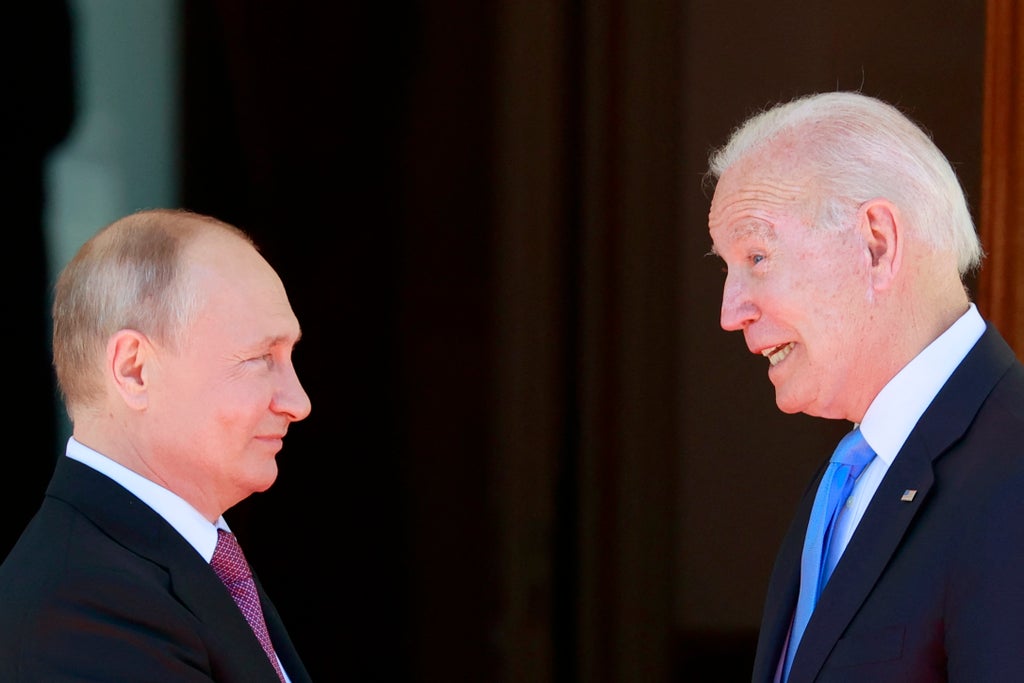 The UK and US could both personally sanction Russian president Vladimir Putin after Joe Biden suggested this could be an option in the case of an invasion.

UK foreign secretary Liz Truss told BBC Radio 4’s Today programme: “We have ruled nothing out in terms of sanctions, and in fact we’ll be legislating to toughen up our sanctions regime and make sure we are fully able to hit both individuals and companies and banks in Russia in the event of an incursion.”

It comes as Russia held military drills on Wednesday and deployed more forces and fighter jets to Belarus for exercises next month as officials prepared to sit down for four-way talks in Paris on the conflict in east Ukraine.

The Kremlin’s point man on Ukraine was due to meet officials from France, Germany and Ukraine for “Normandy format” talks in Paris against the backdrop of a Russian military buildup near Ukraine that has sparked fears of an invasion.

US citizens advised to leave Ukraine

All Americans in the Ukraine have been advised today to leave.

The US Embassy in Ukraine urged US citizens to consider departing now, saying that the security situation in the country was “unpredictable due to the increased threat of Russian military action”.

The security situation in Ukraine “can deteriorate with little notice”, the embassy said on its website.

Charles Michel expressed solidarity with Ukraine as Vladimir Putin ramped up threats to invade more parts of the country.

Mr Michel spoke at a joint news conference with Slovak Prime Minister Eduard Heger, where he warned of massive consequences if Putin went ahead with further actions of aggression.

China would not be pleased if Russia invades Ukraine around the start of the Winter Olympics, the US deputy secretary of state has said.

Wendy Sherman said that an invasion of Ukraine would upset Chinese president Xi Jinping if it coincides with the Games starting next month.

She said that there have been indications suggesting that, if Vladimir Putin decides to go to war, it could happen between now and mid-February.

“We all are aware that the Beijing Olympics are beginning on February 4th, the opening ceremony, and President Putin expects to be there,” she said.

“I think that probably President Xi Jinping would not be ecstatic if Putin chose that moment to invade Ukraine. So that may affect his timing and his thinking about him.”

Ms Sherman made the comments during virtual talks hosted by Yalta European Strategy.

Some more details about the US fighter jets that landed in Estonia today:

Spanish PM Pedro Sanchez has warned that Russian military intervention in Ukraine would lead to massive economic consequences for Russia.

He spoke at a news conference with his Finnish counterpart Sanna Marin today.

Mr Sanchex did not give details on what sanctions Russia might face but said they would be serious.

Ms Marin said the option of Finland joining Nato must remain on the table.

US fighter jets land in Estonia, according to Lithuania

Denmark has said it will deploy four F-16 fighter jets to a nearby Lithuanian airbase in Siauliai on Thursday.

It comes as Nato reinforces its eastern flank due to frictions with Russia over Ukraine.

Germany to send thousands of helmets to Ukrainian soldiers

Germany is to send 5,000 helmets to Ukrainian troops, according to German reports.

Christine Lambrecht, Germany’s defense minister, has decided to fulfill the request from the Armed Forces of Ukraine (APU) for the helmets – news agency DPA reported.

She had announced this decision at a meeting of the Bundestag Defense Committee.

DPA has reported that Berlin still opposes the idea of ​​supplying weapons to Ukraine.

Vitali Klitschko, mayor of Kiev, who had been a boxing world champion, had said in an interview with the bild newspaper that Germany’s refusal to supply weapons constitutes a “betrayal of friends in a dramatic situation”.

He called the delivery of 5,000 helmets a “joke”, adding: “What kind of support will Germany send next? Pillows?”

Moscow should supply two pro-Russia regions in eastern Ukraine with weapons, it has been suggested by a politician.

According to Russian reports, Mr Turchak said: “I believe that in these conditions Russia should provide the Luhansk and Donetsk People’s Republics with necessary assistance in the form of supplies of certain types of weapons to increase their defense capability and deter military aggression clearly being prepared. by Kiev.”

Russia’s parliament is planning to hold consultations on an idea to appeal to Putin to formally recognize the separatist groups.

In May 2014, the DPR declared its independence from Ukraine after the Ukrainian revolution that year, alongside the LPR and the Republic of Crimea.

Russia warned today that it would quickly take “retaliatory measures” if the US and its allies reject its security demands and continue their aggressive policies, ratcheting up pressure on the West amid concerns that Moscow is planning to invade Ukraine.

Speaking to lawmakers Wednesday, Russian Foreign Minister Sergey Lavrov said he and other top officials will advise President Vladimir Putin on the next steps after receiving written replies from the United States to the demands. Those answers are expected this week — even though the US and its allies have already made clear they will reject the top Russian demands.

“If the West continues its aggressive course, Moscow will take the necessary retaliatory measures,” he said.

While Russia is currently waiting for the American reply, Lavrov indicated it wouldn’t wait forever: “We won’t allow our proposals to be drowned in endless discussions,” he said.

Ukraine-Russia map: Where could invasion take place and what is the situation along the border?

US secretary of state Anthony Blinken staged talks with his Russian counterpart Sergey Lavrov in Geneva late last week in the hope of averting catastrophe, warning against a return to the bitter tensions of the Cold War era, while other nations have evacuated their diplomatic personnel from Ukraine as a precaution in case the fighting should commence.

Mr Putin is known to fiercely oppose his neighbour’s determination to join Nato in search of greater protection and is believed to desire the return of former Soviet satellite states like Ukraine, Georgia and perhaps Belarus, Lithuania, Latvia and Estonia to the embrace of what he still considers to be their motherland, lamenting their independence since the collapse of the USSR in 1989.

Our reporter, Joe Sommerlad, has the full report below: