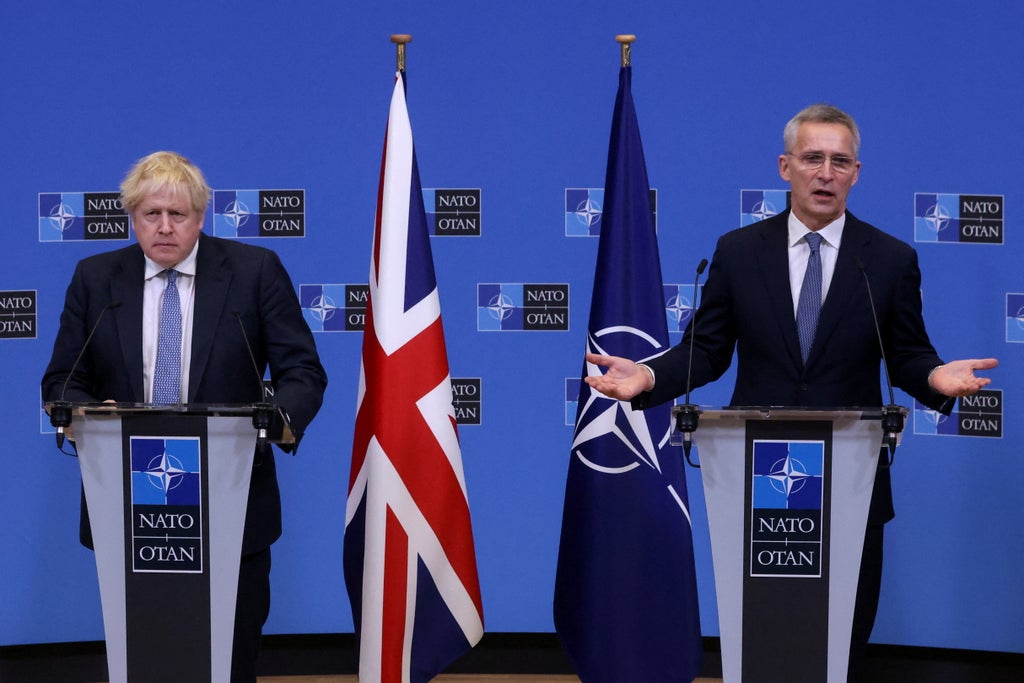 A meeting between Liz Truss and Russian foreign minister Sergey Lavrov in Moscow descended into accusations, recriminations and sarcastic taunts about the British foreign secretary’s supposed lack of geographical knowledge.

The pair conducted a testy press conference in which Mr Lavrov’s meeting was like a mute person talking to a deaf person. He added: “We appear to be listening but we’re not hearing anything.”

Ms Truss hit back at this characterisation, saying she had presented the UK’s perspective and sought to deter Russia from invading Ukraine.

Kommersanta Russian newspaper, reported that when the British foreign secretary demanded that Russia withdraws troops from Ukraine’s borders, Mr Lavrov asked: “You do recognize Russia’s sovereignty over the Rostov and Voronezh regions?”

Ms Truss reportedly said the UK would “never recognize Russia’s sovereignty over those regions”. Two regions which are parts of Russia.

Meanwhile Boris Johnson said on a visit to Warsaw that the Ukraine crisis has reached “the most dangerous moment” since it began and warned that the intelligence on Russia’s troop movements remained “grim”.

US asks its citizens in Ukraine to depart immediately

The US department of state has issued a fresh set of warnings for its citizens asking them to not travel to Ukraine, Crimea, Donetsk and Luhansk, citing potential military action from Russia.

This travel advisory replaces the previous one issued on 23 January.

“Do not travel to Ukraine due to the increased threats of Russian military action and Covid-19, those in Ukraine should depart now via commercial or private means. If remaining in Ukraine, exercise increased caution due to crime, civil unrest, and potential combat operations should Russia take military action,” the advisory read, adding that some areas have increased risk.

There are continued reports of a Russian military build-up on the border with Ukraine, indicating potential for significant military action against Ukraine,” officials said in the advisory.

It added: “The security conditions, particularly along Ukraine’s borders, in Russia-occupied Crimea, and in Russia-controlled eastern Ukraine, are unpredictable and can deteriorate with little notice. Demonstrations, which have turned violent at times, regularly occur throughout Ukraine, including in Kiev.”

Hello, Arpan Rai here, I’m taking over our live coverage on Ukraine now and will be with you for the next few hours.

You can read all about our reportage on Ukraine here

That’s all for our live updates this evening. We’ll be back with the latest news on the Ukraine crisis tomorrow morning.

Jeremy Corbyn has hit out at “very unfair remarks” made by Keir Starmer.

Earlier, Mr Starmer declared his “unshakeable” support for Nato while denouncing an anti-war group with strong links to the former leader.

He said the Stop The War coalition was at best “naive”, and at worst is strengthening those who threaten democracies.

But at a virtual Stop The War rally, Mr Corbyn defended the group, saying it is focused on the British government because it is a British organisation.

He also criticized the prime minister.

“Boris Johnson, who probably for his own political reasons to get out of all the other problems he has got, has headed off to the Ukraine.

“He has made increasingly bellicose statements about the need for and preparedness for armed conflict in the Ukraine – and keeps on thinking he’s in some kind of historic moment.

“He does tend to model himself on Winston Churchill, rather too often for comfort.

“They are simply backing the idea that there is only a military solution to this issue. Well there isn’t. There has to be a peaceful solution.”

Sir Keir Starmer, leader of Britain’s Labor party, declared an “unshakeable” support for Nato as he distanced himself from his predecessor Jeremy Corbyn with an attack on anti-war group with strong links to the former leader.

The Stop The War coalition says it stands against what it describes as Britain’s “disastrous addiction to war” but it has repeatedly come under fire for alleged anti-Western sentiments.

Mr Corbyn, now an independent MP, is a former chairman of the coalition, and was due to speak at a rally staged by the group tonight, titled No War in Ukraine: Stop Nato Expansion.

In a stinging rebuke, Sir Keir said the organization was at best “naive”, and at worst is strengthening those who threaten democracies.

Sir Keir also said Mr Corbyn was “wrong” about Nato, and Labour’s commitment to the alliance is “unshakeable”.

Inside the Pravy Sector on Ukraine’s front line

The Independent’s Kim Sengupta has been speaking to members of a controversial armed group on Ukraine’s front line.

Their commander said: “We are not extremists, we are not ultras, we are not hard or far right. These are the labels some people use against us, and these labels are wrong.”

Watch live as Ukraine receives another shipment of weapons from US

US has increased support to Ukraine during current crisis

A new law to allow the UK to “toughen and expand” its sanctions against Russia has come into force, the government said.

The government claims the reform “provides the framework for the strongest sanctions regime the UK has had against Russia”.

The UK could now impose sanctions on Russian businesses and individuals in a range of significant sectors, such as the chemical, defence, extractives, the ICT investment group and financial services industries.

Labor asked why MPs were not given time to debate the legislation.

Shadow foreign secretary David Lammy said that MPs “deserve the opportunity to scrutinize and debate these measures and they need to be in place.”

The Kremlin has mocked Liz Truss’s alleged issues with geographical locations before.

The foreign secretary said in a television interview on Ukraine that “we are supplying and offering extra support into our Baltic allies across the Black Sea”.

The Baltic and Black Seas are around 700 miles apart.

Maria Zakharova, the Russian Foreign Ministry spokeswoman, commented: “The Baltic countries are called so because they are located precisely off the coast of this [Baltic] be. Not the Black [Sea]. If anyone needs to be saved from anything, then it is the world from the stupidity and ignorance of Anglo-Saxon politicians.”

Liz Truss reportedly made an embarrassing geographical error at a press conference after her meeting with Russian foreign minister Sergey Lavrov in Moscow.

Kommersanta Russian newspaper, reported that when the British foreign secretary demanded that Russia pulls back its force from Ukraine’s borders, Mr Lavrov asked: “You do recognize Russia’s sovereignty over the Rostov and Voronezh regions?”

After a brief pause the British Foreign Secretary replied: “Great Britain will never recognize Russia’s sovereignty over those regions.”

The two regions are, of course, parts of Russia as, according to the report, the UK’s ambassador to Moscow, Deborah Bronnert, explained to Ms Truss.

Later the British embassy tweeted (in Russian) this response from Ms Truss that appeared to confirm she made the mistake.

It said she told Russian media: “During the meeting it seemed to me that Minister Lavrov was talking about a part of Ukraine. I have made clear that these regions [Rostov and Voronezh] are part of sovereign Russia.”

A Foreign Office official refused to comment on whether Ms Truss may have confused Rostov and Voronezh with Donetsk and Luhansk in eastern Ukraine — which became separatist republics with Russian backing after the conflict of 2014.