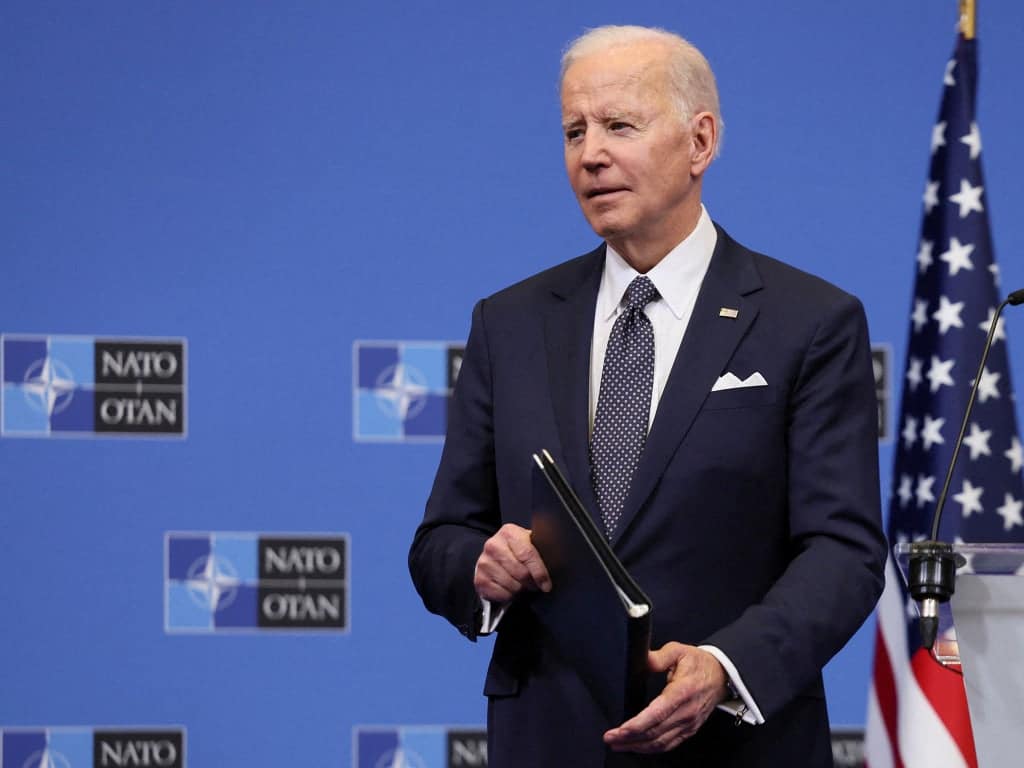 Mr Biden said Nato was “more united” than it had ever been as the alliance agreed to double its defenses by moving 40,000 troops to its eastern flank in light of the Russian invasion.

He said Mr Putin had underestimated the “cohesion” of western countries.

Earlier today, Jens Stoltenberg, Nato’s secretary general, confirmed four new battlegroups will be sent to Slovakia, Hungary, Bulgaria and Romania – in addition to four others in the Baltic countries and Poland.

He also pledged military aid, including additional weapons. It comes after Ukrainian president Volodymyr Zelensky, via video link, asked for “1 per cent” of Western allies’ weapons.

Following the meeting, Nato leaders announced they had also agreed to supply hazmat suits to Ukrainians amid growing concerns Russian president Vladimir Putin may use chemical and biological weapons.

Russia now ‘more of a burden’ to China – Pentagon

Russia’s invasion of Ukraine has made it more of a strategic burden on China, a senior Pentagon official said late on Thursday.

“I do think that there’s a degree to which what Putin has done in Ukraine makes Russia much more of a strategic burden for Beijing than it was six weeks ago or six months ago,” Under Secretary of Defense for Policy Colin Kahl said.

In February, China and Russia declared a “no limits” partnership, backing each other over standoffs on Ukraine and Taiwan with a promise to collaborate more against the West.

US calls for Mexico ‘solidarity’ in supporting Ukraine

The US ambassador to Mexico spoke to Mexico’s lower house of Congress on Thursday, urging politicians there to join the United States in supporting Kyiv against Russia’s invasion of Ukraine.

“The Russian ambassador was here yesterday making a lot of noise about how Mexico and Russia are so close. This, sorry, can never happen. It can never happen,” Salazar said.

“We have to be in solidarity with Ukraine and against Russia.”

“I remember very well that during the Second World War there was no distance between Mexico and the United States, both were united against what Hitler was doing,” he added.

In May 1942, Mexico’s Congress approved a formal resolution of war against the Axis powers, about half a year after the United States declared war on Germany.

“On the orders of Uncle Sam, Mexico will never answer ‘Yes, Sir’” Koronelli said, drawing applause from some legislators.

During his appearance, Russia’s ambassador repeated his government’s position that it is conducting a “special military operation” to “de-Nazify” Ukraine, whose president is Jewish.

“Russia did not begin this war, it is finishing it,” Koronelli said.

Ukraine and Western allies call this a baseless pretext for a war of choice that has raised fears of wider conflict in Europe.

75 civilians have been killed in Kyiv, says Klitschko

ICYMI: A total of 75 civilians have now died in Kyiv since the start of the war, the city’s mayor has said.

See also  Hybrid work doesn't have to be emotionally exhausting

Vitali Klitschko added that another 307 people had been injured in the capital over the past four weeks.

ICYMI: A total of 3,343 people were evacuated from Ukrainian cities through humanitarian corridors today, Deputy Prime Minister Iryna Vereshchuk said, down from 4,554 yesterday.

Ms Vereshchuk said in an online post that 2,717 people had left the besieged city of Mariupol. She accused the Russians of blocking humanitarian aid convoys into the city for the last three days.

Around 7 million Ukrainians have been internally displaced since the war started one month ago today, according to the World Health Organisation. A further 3.6 million have fled the country.

Joe Biden says that Nato would respond “in kind” if Vladimir Putin used chemical weapons in his unprovoked assault on Ukraine.

The president spoke after a day of summits in Belgium with Nato allies, the European Union and G7 partners.

Russian troops are allegedly using rape “as an instrument of war”, with the Ukrainian prosecutor general accusing invading soldiers of breaking into a home near Kyiv before shooting dead a Ukrainian man and then sexually assaulting his wife.

Rory Sullivan has the story.

ICYMI: A Russian state media journalist has appeared to blame Ukrainian “nationalists” for the destruction of Mariupol, a city which has been relentlessly bombed by Moscow.

“Sad scenes, of course… the [Ukrainian] nationalists withdraw trying not to leave a stone unturned,” the anchor said.

‘We all stay united and pray for peace’: How tech startup with Ukrainian and Russian staff is navigating conflict

Jacob Udodov speaks to The Independent about trying to keep Bordio staff safe and employed amid the violence of war.

The southeastern port city has been bombed for a month, with tens of thousands of civilians struggling with a lack of food, water and heating.

US military leaders have tried calling Russian counterparts but calls not taken, raising fears of ‘sleepwalking’ into war

ICYMI: Lines of communication between top US Defense Department officials and their Russian counterparts have gone dark since Russia launched its unprovoked invasion of Ukraine last month, placing the world’s two nuclear superpowers in jeopardy of mischaracterising each other’s troop movements and drilling with potentially disastrous consequences.

According to the Washington Postboth General Mark Milley — the chairman of the Joint Chiefs of Staff — and Defense Secretary Lloyd Austin have repeatedly tried arranging conversations with their opposite numbers in Moscow, General Valery Gerasimov and defense minister Sergei Shoigu.

In a statement, Pentagon spokesperson John Kirby said neither Russian official had accepted the invitations and had instead “so far declined to engage”.

Lines of communication between top US Defense Department officials and their Russian counterparts have gone dark since Russia launched its unprovoked invasion of Ukraine last month, placing the world’s two nuclear superpowers in jeopardy of mischaracterising each other’s troop movements and drilling with potentially disastrous consequences.