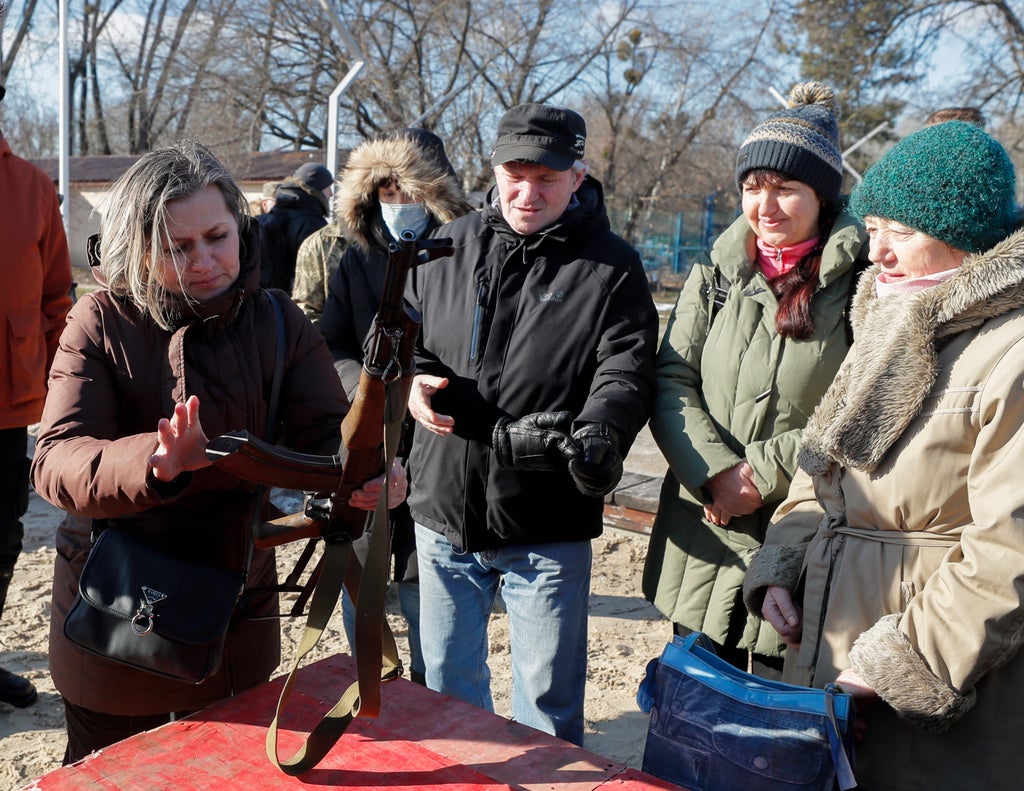 “Will we really have bombs falling here in two day’s time? Is there really going to be a real war? mused the young army officer who is cutting short his leave in Kiev to return east, to the frontline in Donbas. “I really wish there isn’t a war. But it may happen, and I want to enjoy every moment of this. I don’t know when I will be able to be here again. Of course we will do our duty, but we are all worried about our families, and we pray they will be alright.”

Vladimir Putin’s war on Ukraine may start on Wednesday, according to US intelligence agencies who, according to reports, have intercepted Russian communications revealing “specific and alarming” details of an onslaught which would be likely to cause devastating casualties.

The warning was the latest, and the most dramatic, in a series of reports coming from Washington – usually followed by ones from London – which have said that an imminent attack was about to take place. But it was these reports of a Russian invasion starting on 16 February which have been the catalyst for a flurry of actions which is cutting off Ukraine, making its people feel isolated and adding to the trepidation about what lies ahead.

In the space of 48 hours many foreign countries, including the US and UK, have asked their nationals to leave and stripped most staff out of their embassies. Military training teams for Ukrainian forces – including those of the UK and US – have started to be pulled out.

On Sunday, a number of airlines suspended flights to the country some saying that they were facing enormous difficulties in getting insurance to do so. The shooting down of Malaysia Airlines flight MH17 almost eight years ago as it flew over Ukraine – killing 298 passengers – remains a horrifying example of what can go wrong at a time of war.

There are, of course, those who have other means of getting away. More than 20 charter and private jets, carrying oligarchs, wealthy businessmen and their families left Kyiv on Sunday alone – with many more booked amid fears that the airspace will get closed.

Such modes of transport are beyond the means of the overwhelming majority of people. But there is desperation among some now. Bob Allen, from Manchester, living in Kiev with his Ukrainian born wife and two children found that KLM has canceled his flight and were not planning to run any more in the foreseeable future. “We are not the type of people who would normally ever think of private jets or anything like that”, said Mr Allen. “But this seems like a real emergency and so a group of friends and I explored whether we could charter a plane. It was impossible – the prices were way beyond us.”

Many are moving inside the country. Anna Nazarenko and her family de ella are shutting their apartment near the city center and departing to stay with relations in Lviv, in the west of the country. “Our place here is quite near some government buildings, so we did not think it was safe to stay,” said the 48-year-old teacher.

All this is taking place in the shadow of 130,000 Russian troops massed on Ukraine’s borders. With all military assets now in place, according to a number of Western governments, for an invasion and, possibly, occupation.

The diplomatic drive attempting to avert conflict continues at great pace, with a succession of leaders and ministers beating a path to Moscow to see Mr Putin.

The German chancellor, Olaf Scholz, is due in Kiev to meet Ukraine’s President Volodymyr Zelensky, before going on to see Mr Putin in Moscow. Scholz has repeated the warning by other Western leaders that Russia will face tough sanctions if it takes military action. But the newspaper, Die Welt, has reported that officials in Berlin have considered whether Scholz would offer Mr Putin an assurance that Ukraine would not join Nato – a key Kremlin demand – for the next decade. This, said the officials, was a “thought experiment.”

Last week, France’s President Emmanuel Macron had talked about addressing Russia’s security concerns after visiting Moscow, reportedly suggesting “Finlandisation” as a possible future for Ukraine – a formula under which Ukraine, like Finland, will not join Nato and would not seek to provoke the Kremlin.

Some ministers in Nato member states object to this type of “soft” stance. There was considerable publicity about the remarks from the British defense Secretary, Ben Wallace, that “there is a whiff of Munich in the air from some in the west” in their dealing with Russia.

Comparing Ukraine’s western allies to those who appeased Adolf Hitler was not universally welcomed by Ukrainians. Vadym Prystaiko, the country’s ambassador to London commented: “It’s not the best of time to offend our partners in the world, reminding them of this act which actually not brought peace but the opposite, it brought war.”

Mr Wallace’s “Munich” remarks came on the same weekend that the British government announced that it was withdrawing troops which had been training Ukrainian soldiers to defend themselves. Britain had gained considerable kudos in Ukraine for supplying anti-tank missiles, NLAWs, to the country’s military during the past few weeks and months. Now some of the training program for it will have to be abandoned.

Sitting in the park, Andriy Kostenko, a captain in a volunteer battalion, sought to be diplomatic. “We are very grateful to the UK for sending us the weapons, for generally being so supportive”, he said. “It is sad to see friends leave, but at the end of the day we Ukrainians always knew that we would have to fight for ourselves.”

He spreads out his arms in the air. “Look around you, look at the sky, look at the sunshine – blue and yellow, the colors of our national flag – who knows, maybe it is a sign that everything will be alright at the end after all.”