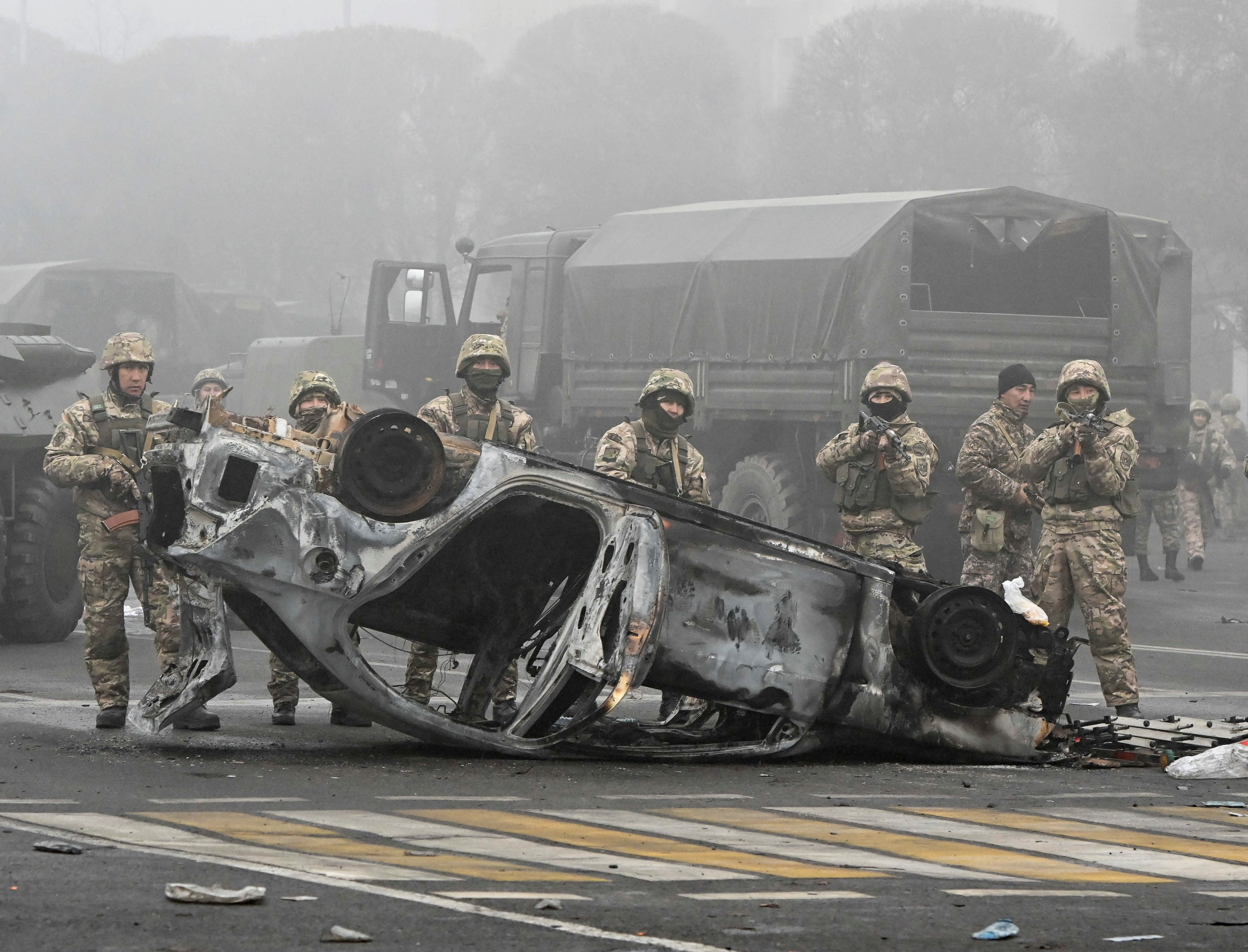 As the dead pile up in the morgues of Kazakhstan, President Kasim-Yomart Tokáyev has decided this Thursday to launch an “anti-terrorist operation” against the protesters. The protests, which began in early 2021 due to the increase in the price of gas for cars, have become, as they have grown, an opposition cry against Tokayev and his predecessor, the self-proclaimed “father of the country”, Nursultan Nazarbayev. The clashes have claimed “dozens of lives” and have left some 2,000 detainees in Almaty (the south of the country and the epicenter of the unrest), according to authorities. Medical services number more than 1,000 injured, of which about 400 are hospitalized. Faced with such a situation, Russia and other allies have announced the sending of troops to support the Government.

Several Russian troop planes took off on Thursday for Kazakhstan. Members of the Collective Security Treaty Organization (CSTO) agreed last night to deploy a “peacekeeping mission.” This is the first time that the Russian-led alliance, which includes Belarus, Armenia and other Central Asian countries, has adopted a measure like this since its founding in 1992. According to the Security Committee of the State Duma, the action it will last a month.

The Russian Foreign Ministry assured this Thursday that the clashes “have been inspired from abroad through armed formations that have been trained,” and stressed that the priority now is “the steps that facilitate the anti-terrorist operation” launched by the Kazakh government. . According to the vice president of the Federation Council (the upper house), Konstantin Kosachev, the first reports that Moscow shuffles mention “gangs from the Middle East and the Middle East, especially from Afghanistan.”

The protests resumed in force on Sunday after a reform that had ended subsidies that made liquefied petroleum gas (LPG) cheaper for cars. This type of vehicle is very popular in some regions of the country, where three out of four use this type of fuel. So the demonstrations spread throughout the country and clashes with the security forces began. Faced with national security forces overwhelmed by the altercations, the government, which has blamed six private companies for inflating the cost, has reversed and postponed the transition to the new price system for a year, at the same time that it has set a maximum cost in retail sales for 180 days. According to his calculations, a liter of gas will be worth 15 cents of a euro, an intermediate solution between the 10 that it cost before and the 20 that it soared after the New Year.

“At the request of the President of the Republic of Kazakhstan, and in view of the threat to its national security and sovereignty, caused among other things by external interference, the CSTO collective, in accordance with Article 4, decided to send maintenance forces of peace ”, revealed the Armenian Prime Minister, Nikol Pashinián, in a statement posted on Facebook. This article contemplates the intervention of the rest of the allies “in the event of an aggression” that “threatens the territorial integrity and sovereignty of the member country.” Pashinian’s writing received numerous criticisms, precisely because his country was defeated by Azerbaijan in the 2020 Nagorno-Karabakh war, where it lost part of that territory and did not receive the support of the CSTO.

The crisis caused Tokayev to accept the resignation en bloc of the Prime Minister’s Cabinet on Wednesday and to assume control of the Security Council, which Nazarbayev had led since 2019 when he left the presidency after three decades in charge of the country. That year Tokayev succeeded him, proclaiming himself the winner of an election that the Organization for Cooperation and Security in Europe (OSCE) considered fraudulent due to the veto of independent candidates.

The Tokáyev government has imposed a curfew and a state of emergency throughout the country, from which images arrive by dropper due to the cutting of the Internet and telephone connections. “I can’t talk to my relatives, they don’t get messages or calls,” says a young Kazakh woman, who prefers not to give her name and surname, who lives in Spain and whose parents live in Aktobé, in western Kazakhstan. “I think that in the end it will happen as in Belarus,” he regrets, recalling that the peaceful protests in that country for the 2020 presidential elections were violently suppressed by the Alexandr Lukashenko regime.

In Kazakhstan, some public buildings have been taken, such as the Almaty City Hall, and in others fires have been started. In addition, the images show the chaos that the country is experiencing: from kneeling security agents apologizing to the protesters, to direct clashes between them and columns of soldiers firing at the population.

According to Kazakh state television, 12 officers have died in Almaty alone. On Wednesday night Tokáyev reported shooting clashes at the airport in this city, the economic center of the country, between paratroopers and protesters. In addition, the airports of Aktau (west) and Aktobé have been closed, while airlines such as the national Air Astana have reported the suspension of their flights temporarily “due to the lack of Internet connection.”

Meanwhile, the Embassies of various countries recommend that their citizens stay at home. “We strongly recommend Russian citizens to keep security measures to the maximum and take refuge in hotels or houses with food and water,” the Russian Foreign Ministry warned in a statement.

The CSTO’s intervention to stop the protesters could also fuel ethnic tensions in the country. The head of Russian diplomacy, Sergei Lavrov, accused Turkish President Tayyip Erdogan just two months ago of promoting an anti-Russian campaign in the country with measures such as making the Slavic language no longer official despite the fact that a large proportion of the population la speaks. In a telephone conversation between Lavrov and his Turkish counterpart, Mevlüt Cavusoglu, both ministers “showed their support for the country’s government’s efforts to restore constitutional order,” and Lavrov informed Cavusoglu of the measures adopted by the CSTO, as detailed his ministry. The Kremlin has also tightened security at its Russian Baikonur cosmodrome in Kazakhstan.

For its part, the Kyrgyz Parliament has postponed the vote on sending troops to Kazakhstan until Friday due to lack of a quorum, Interfax reports. The Kyrgyz Government asked its citizens for “understanding” at the prospect of having to fulfill their obligations to the CSTO. A couple of years ago the nation welcomed thousands of people from the Chinese minority of the Dungan, who were fleeing inter-ethnic clashes with the Kazakh population.