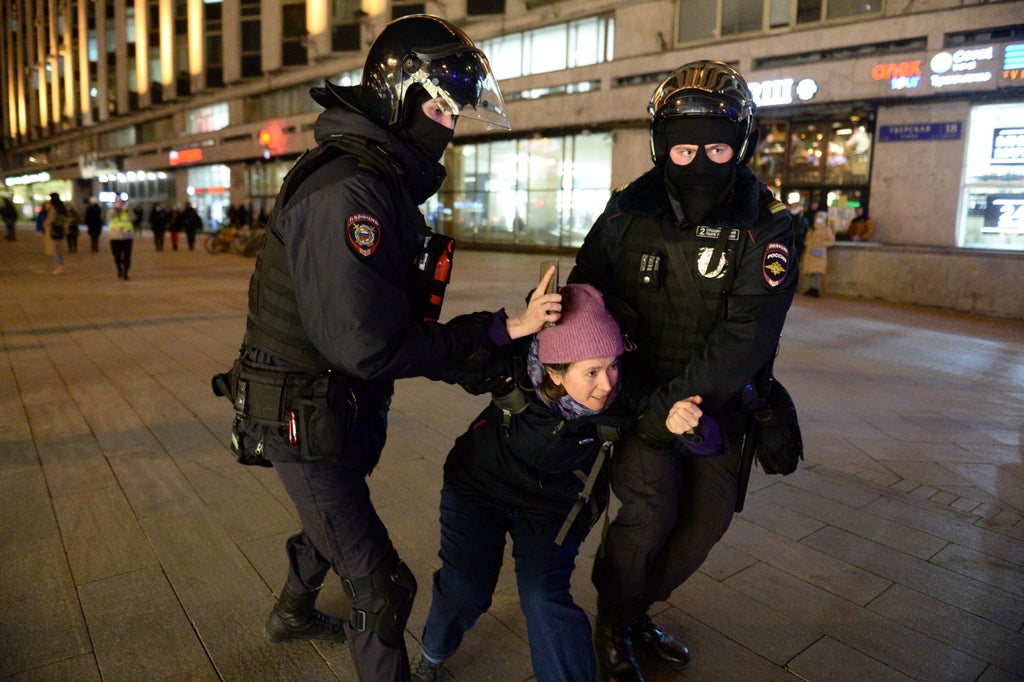 After thousands of Russians took to the streets to protest against the invasion of Ukraine, authorities sought Friday to push back against the spreading antiwar sentiment and project an image of strength and righteousness.

According to the OVD-Info rights group that tracks political arrests, a total of 1,820 demonstrators were detained in 58 Russian cities on Thursday night, including 1,002 in Moscow, where the biggest protest took place, drawing several thousand people to the streets in the city center.

Kremlin spokesman Dmitry Peskov on Friday sought to downplay the scale of the protests, saying that while President Vladimir Putin “hears everyone’s opinion,” he also knows “the share of those who have a different point of view and those who are sympathetic to such a necessary operation.”

An ominous show of support for the attack on Ukraine came from Chechnya, Russia’s predominantly Muslim region run by the iron-fisted leader Ramzan Kadyrov. Chechen media on Friday reported that Kadyrov rallied some 12,000 security forces operatives in the center of Grozny, the region’s capital, for what was described as an operational readiness check.

According to a local news site, Chechnya Today, Kadyrov said they were prepared to take part “in any special operation,” if needed, and urged Ukraine’s President Volodymyr Zelenskyy to call Putin and offer an apology.

The editor-in chief of Russia’s state-funded TV channel RT, Margarita Simonyan, posted a video on Telegram showing Russian armored vehicles rolling through a rural area and a man shouting, “God save you, guys! We’ve been waiting for you for eight years.”

Simonyan, whose blog on Telegram has over 132,000 subscribers, said in the post that it was Ukrainians near the city of Kharkiv greeting the Russian military.

See also  Summer solstice 2022: Sensual traditions on the longest day of the year

Those who spoke out against the invasion, in the meantime, were facing repercussions.

Yelena Chernenko, a journalist with the Kommersant daily, said she was kicked out of the Foreign Ministry pool over an open letter condemning the attack on Ukraine that has been signed by nearly 300 reporters. Chernenko said on the messaging app Telegram that the ministry cited her “lack of professionalism,” and she urged officials not to retaliate against journalists who signed the letter.

“Apparently such are the times,” Chernenko wrote of the ban she now faces.

Another journalist facing trouble was Yury Dud. Like many others on Thursday, Dud, a vocal Kremlin critic who runs one of the most popular YouTube blogs in Russia, wrote an elaborate social media post decrying the invasion of Ukraine.

On Friday, an influential Kremlin-backed internet watchdog group, the League of Safe Internet, filed a request with the Prosecutor General’s office and the Justice Ministry to consider labeling Dud a “foreign agent” — a crippling designation that implies additional government scrutiny and strong pejorative connotations that would discredit him.

Popular state TV station, Channel One, announced it was replacing entertainment shows on its schedule with news and political shows “because of the current situation.” Among those scrapped was a late-night show hosted by a popular comedian, Ivan Urgant, who spoke out against the invasion on Instagram.

The channel’s spokespeople insisted the decision to remove Urgant’s show from the schedule had nothing to do with his Instagram post.

In another sign the Kremlin was tightening the screws on dissenting voices, Russia’s state communications and internet watchdog, Roskomnadzor, announced “partial restrictions” on access to Facebook in response to the platform limiting the accounts of several Kremlin-backed media. It did not say what exactly its restrictions implied.

The agency said it demanded Facebook lift its restrictions on state news agency RIA Novosti, state TV channel Zvezda and pro-Kremlin news sites Lenta.Ru and Gazeta.Ru, but the platform didn’t comply. The Facebook moves, according to Roskomnadzor, included marking their content as unreliable and imposing restrictions on search results to reduce the publications’ audience on Facebook.

In its official statement, Roskomnadzor said that Russia’s Foreign Ministry and the Prosecutor General’s office on Friday found Facebook “complicit in violation of fundamental human rights and freedoms, as well as the rights and freedoms of Russian nationals,” and cast its move as ‘“ measures to protect Russian media.”